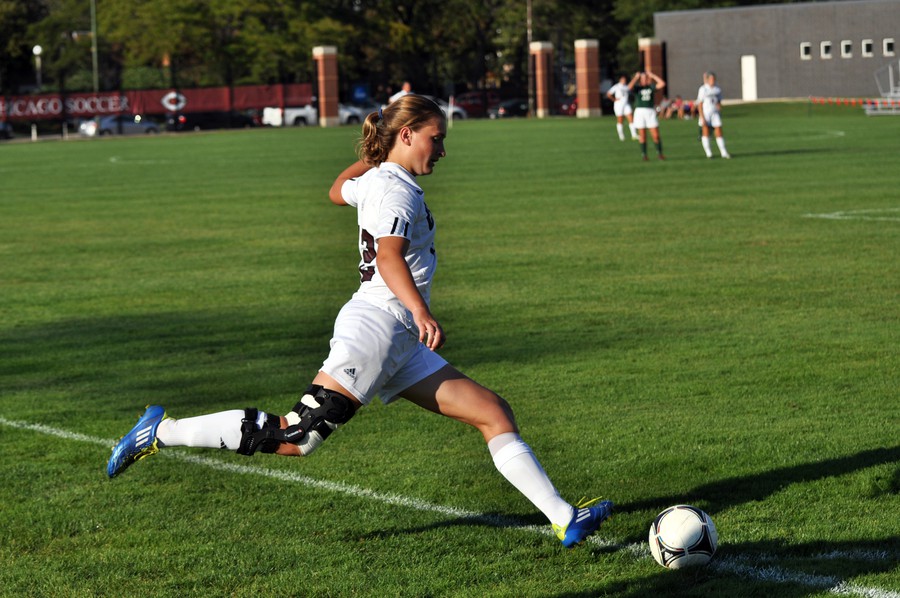 In a crucial stretch of conference play, the Maroons’ offense finally broke out of its slump and scored as many goals this weekend as it had in its last four games combined.

The Maroons’ first game against Rochester started off slowly; both teams created plenty of scoring opportunities, but neither was able to get on the scoreboard. Chicago took control from the start and held it throughout the first half, leading in shots (10–8) and corner kicks (6–0). The score was tied 0–0 at half, leaving the door open for either team to step it up in the second half.

The Yellowjackets broke through first and scored just five minutes into the second half after a free kick awarded for a hand ball, putting the visitors up 1–0.

Rochester’s goal proved to be the spark the Maroons needed to push their offense even further, and the hosts evened the score five minutes later. Third-year forward Meghan Derken scored her second goal of the season off of a pass from fourth-year forward Natalia Jovanovic.

The South Siders rallied to take the lead in the 76th minute, bringing the score to 2–1. Third-year midfielder Sara Kwan stole the ball, ran it up the center, and passed to second-year forward Julia Ozello on the left wing who scored the game-winner, her fourth goal of the season.

Third-year goalkeeper Jacinda Reid held onto the lead for the Maroons with four saves and one goal allowed with 80 minutes in goal. The South Siders outshot Rochester 23–11.

“Rochester was a must-win game,” said third-year midfielder Katharine Hedlund. “When we went down 1–0, it was a chance for us to regroup. Our team was able to remain positive and get two goals back and the win, which is a great thing to know we can do moving forward into the remainder of our season.”

Against Case on Sunday, the South Siders started off strong offensively, creating many opportunities and getting on the scoreboard quickly. Eleven minutes into the game, fourth-year midfielder Micaela Harms headed the ball into the goal for her sixth goal of the season off a corner kick from Jovanovic. The Maroons held that lead for the rest of the game.

“Our team created a number of great chances against Case,” said Hedlund. “Although we weren’t able to put more than one away, it was one of our best games in terms of creating dangerous scoring opportunities.”

Since the Maroons’ offense couldn’t score any more goals, the pressure fell on the defense to stop the Spartans from scoring. Case came close right off the whistle in the second half, but Reid stopped the shot with one of two saves made throughout the game.

“Our defense had to have a shutout to win the game,” said Hedlund. “We were able to shut them down offensively and keep them scoreless to ensure our win.”

Chicago will now take a break from conference play. The Maroons face off against UW–Oshkosh tomorrow. The Titans (10–5–1), winners of seven straight games, should provide the South Siders with a challenge in their last non-conference game of the season.

The game against UW–Oshkosh is scheduled for 3 p.m. tomorrow on Stagg Field.