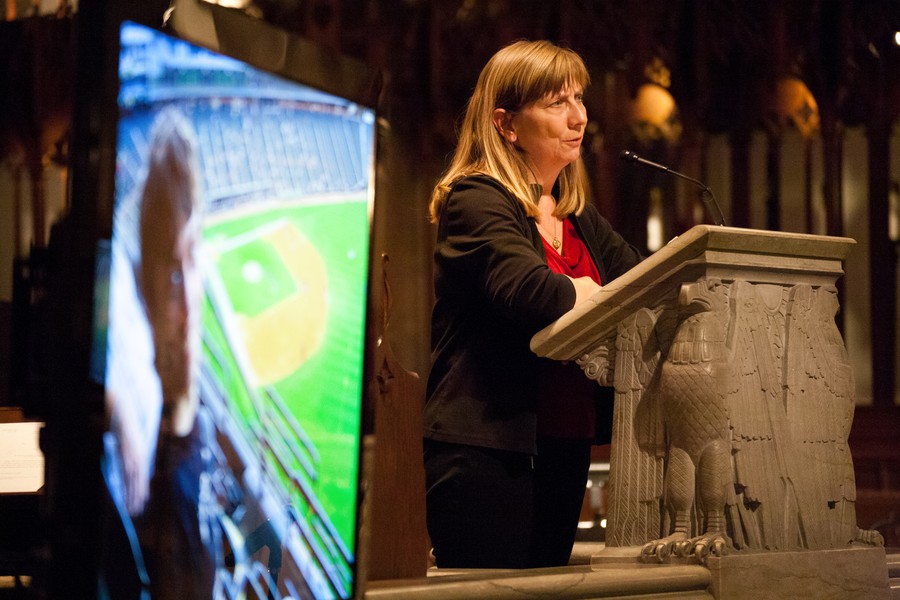 Family, cherished friends, and colleagues congregated to remember and celebrate the life of Austin Hudson-LaPore (1992-2013) in a memorial service held yesterday evening in Rockefeller Chapel.

Hudson-LaPore, 20, went missing on June 12 after he ventured out without his wallet or cell phone to watch the aftermath of a large thunderstorm that had rolled through the area earlier that evening. His body was found a week later in Lake Michigan, and soon after, his death was declared an accidental drowning by the Cook County Medical Examiner. He was planning to work at a lab on campus over the summer and preparing for his fourth year at the University.

A dedicated biochemistry student, Hudson-LaPore was described as a kind and intelligent friend. Fellow students shared their memories of Hudson-LaPore’s tenacity in the face of grueling problem sets and his willingness to help his friends succeed in whatever they were doing.

In opening remarks, Reverend Elizabeth Davenport, dean of Rockefeller Chapel, told those in attendance to take the opportunity Monday evening to grieve and to remember their loved ones. She invited anyone to share their memories of Hudson-LaPore at the end of the service.

Fourth-year Marie Wu, a close friend of Hudson-LaPore, read from an open letter she posted online in June, shortly after hearing the news of his passing while in Taiwan.

“To the boy I laughed with, learned with, grew with, and who quickly became one of the dearest of friends,” she read. “You’ve shaped me and changed me, and I am much of who I am today because of your influence.”

Hudson-LaPore’s family and friends described him as a student with diverse interests, including an affinity for nature and fascination with numbers. His mother, Laurie Hudson, added that he also enjoyed baseball, especially rooting for the underdogs “because he was open to the possibility of a surprise.”

As interludes throughout the memorial service, The Decani, a semi-chorus of the Rockefeller Chapel Choir; Russell Rolen on the cello; and Thomas Weisflog on the piano performed various works by Bach, Gabriel Fauré, and John Tavener in tribute to Hudson-LaPore’s love of classical music.

Professor Richard Jordan, chair of the department of chemistry, spoke about Hudson-LaPore’s accomplishments in his department. Jordan said that even though Hudson-LaPore was a newer addition to the department, he was already making a great impression as a high achieving student.

“With his creativity and enthusiasm and the positive way in which he interacted with his colleagues and everybody…I’m sure he would have excelled in research, accomplished something, and put his own stamp on it,” he said.

Hudson-LaPore’s father, Gregg LaPore, also introduced and thanked three men who helped his family find their son in the weeklong search in June: Andrew Holmes, a community organizer; Eddie Hudson, a fisherman who found Hudson-LaPore’s body by Lake Michigan; and Rob Larson with his K-9 Captain Dexter, who led searchers early on to the lake shore.

After learning of their son’s death, Hudson and LaPore “asked everyone to commit more fully to what matters most in their lives. To live a little bit larger, in order to take up some of the space that he left behind,” they recalled at the memorial.

Hudson-LaPore, a native of Albuquerque, New Mexico, is survived by his father, his mother, and his sister, Aidan Hudson-LaPore.