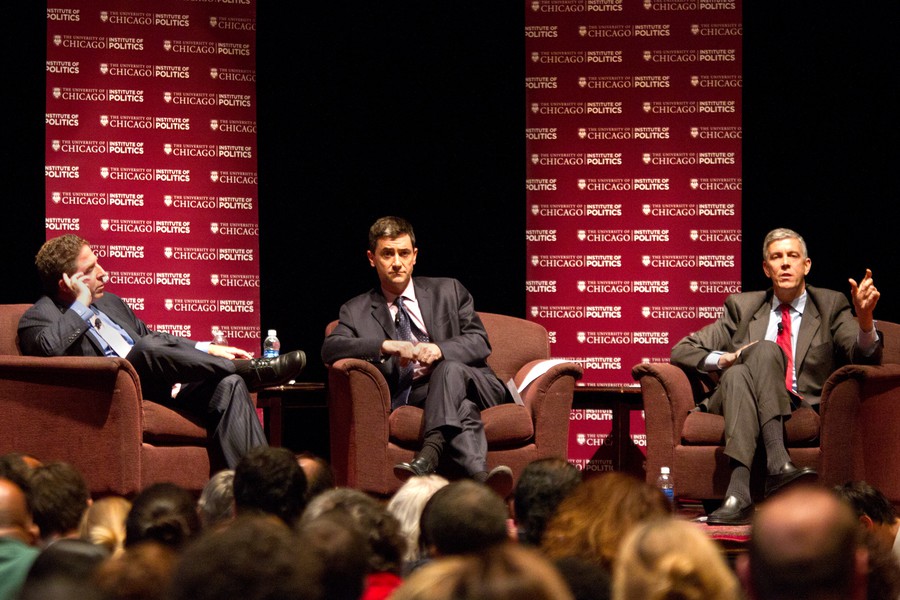 United States Secretary of Education and Hyde Park native Arne Duncan explained the Common Core State Standards Initiative in a panel discussion held Thursday afternoon at International House. Duncan was joined by Frederick Hess, a scholar at the American Enterprise Institute, who argued against the standards.

Generally referred to as the Common Core, the initiative, designed by the National Governors Association and the Council of Chief State School Officers, sets fixed educational standards for K-12 students and teachers. The goal: to ensure that American students are prepared to either attend college or enter the workforce by the time they complete high school. So far, 45 states have chosen to adopt the Common Core.

According to Duncan, the system that preceded the Common Core has failed to set sufficient standards to adequately prepare students for their adult lives.

“Far too many [students] who actually graduate from high school have to take remedial classes because they are not ready,” he said. “They worked hard, but the expectations just simply haven’t been there.”

Though the federal government has been involved in creating the Common Core standards, the task of meeting these standards will be left to local officials.

Although he supports the new standards, Duncan argued that they will not improve public education by themselves, citing large problems in teacher pay and training.

“If you talk to young teachers, about three quarters of them say they were unprepared to enter the classroom,” he said. “How do we get more hands-on faculty experience, how do we get more content knowledge, and how do we help [teachers] with technology when they’re an undergrad? Those are changes that they are desperately asking for.”

On the other side of the political aisle, Frederick Hess argued that the Common Core creates too much change, as it revises both the teacher evaluation benchmarks and the standardized tests used to evaluate teachers.

“I believe it [evaluation] is a good and helpful thing and done well. I sure as heck don’t want people changing the metrics and the scoring just as we’re rolling out new evaluations,” he said.

He also worried that the Common Core represents the federal government taking “an increasingly intrusive role” in education.

Despite Hess’s criticisms, Duncan believes that the Common Core is the best option for improving education now.

“We’re pushing a lot of change in a short amount of time, and maybe in a perfect world, we’d do it over 10 or 15 years, [but] I just don’t think our kids can wait that long.”