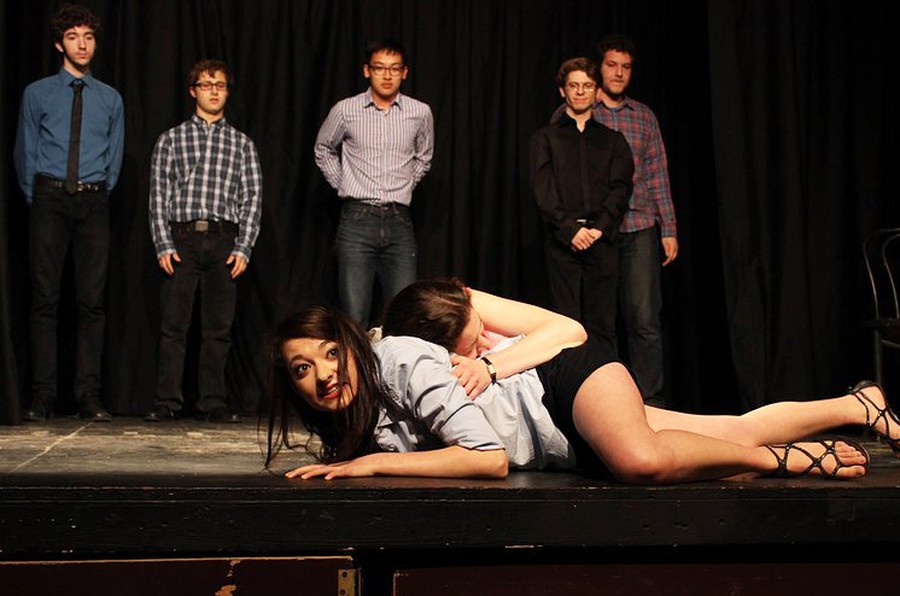 Recall for just a moment how free we were as kids: Our uninhibited minds, full of possibility and unaware of constraint, fluctuated between fantasy and reality with the slightest thought, the slightest reverie. Through eyes of experience, we reflect on the ditz and dazzle of those days long past and give new, humorous meanings to the creations of our younger selves. It is this experience, especially its humor, that Off-Off Campus aims to capture in The Silver Moon Princess of Eternia: a Novel by Second Grader Melissa Zhang.

This new sketch explores some common dreams of our generation (and the cultural influences which have contributed to them) through the lens of a second-grader’s fantasy novel. Although the sketch is composed of childlike elements, its content and message very much target a college audience.

As each Off-Off generation performs for only two seasons, this season will be the last for the 27th generation before they pass the torch to the next one, explained Off-Off president and third-year Haley Johnson.

With this in mind, the cast hopes to bring a unique, perfect show that represents the group and its individual performers. Directors Davio Cianci and Peter Herman, third-years and members of the 26th generation of Off-Off, described the comedy show as not only a fantasy sketch, but something much more universal and ambitious—a portrayal of all the things we all have in common.

The team’s working method, Herman explained, was to take the general character and influence of popular fantasy novels (think Harry Potter) and use them as springboards for original works of fiction. In the pre-writing period, the cast members’ individual sketches contained similar threads of childhood escapism through dreaming and storytelling. These were ultimately incorporated into a diverse yet cohesive reality of the world as depicted in the novel of second-grader Melissa Zhang, the primary character. For Off-Off’s 27th generation (along with the directors), her novel becomes “a representative sample for all our own fantasy novels,” Herman said.

The goings-on of Melissa’s day-to-day life inspire her to create her own world. Watching as figments of her imagination become characters in their own reality—living, interacting, and even themselves creating—the audience can take in more than a few humorous scenarios. Viewers may just crack a chuckle or two as they remember conquests and foibles from their own days, predicted several members of the cast. Tears, I was told, may also result.

Melissa’s analog character in this fantasy land, Miranda, may or may not be present while these events transpire; this could add even more complexity and intrigue to the concurrent plot lines. In either case, the “building and rolling” element, as Herman dubbed it, of the pre-written show should keep viewers on their feet. On that note, watch out for the following: seductive water nymphs, a veiled Lolita reference, dragons, sword fights, a certain Princess Raborka, and cursed maidens.

The show promises to be both thought-provoking and silly, as does a book review of Melissa Zhang, written by Peter O’Leary, a member of UChicago’s creative writing department. (His review can be found on Off-Off’s Facebook page as of October 22.) For those interested in attending one of the shows, those that run during the week of October 27 will feature a telethon theme. As such, for every ticket sale made for those shows, one dollar from each ticket sold will be donated to CeaseFire Illinois, a local anti-violence group.

Beyond the comedic value of this upcoming season lies a message about how heavily our experience in the world relies on the way in which we deal with reality. “[Melissa] may have given birth to Eternia, and created it out of nothing,” explained second-year Karlee Esmailli. Underneath the sketches’ playful absurdity lies an exposure of the way we construct the world, then subsequently perceive and experience these constructions. The existence of a higher power and, more importantly, the necessity of one, are brought into question. Strangely, splendidly, because the cast performs each show (five total) as originally as possible, the way in which these themes are dealt with has yet to be seen.