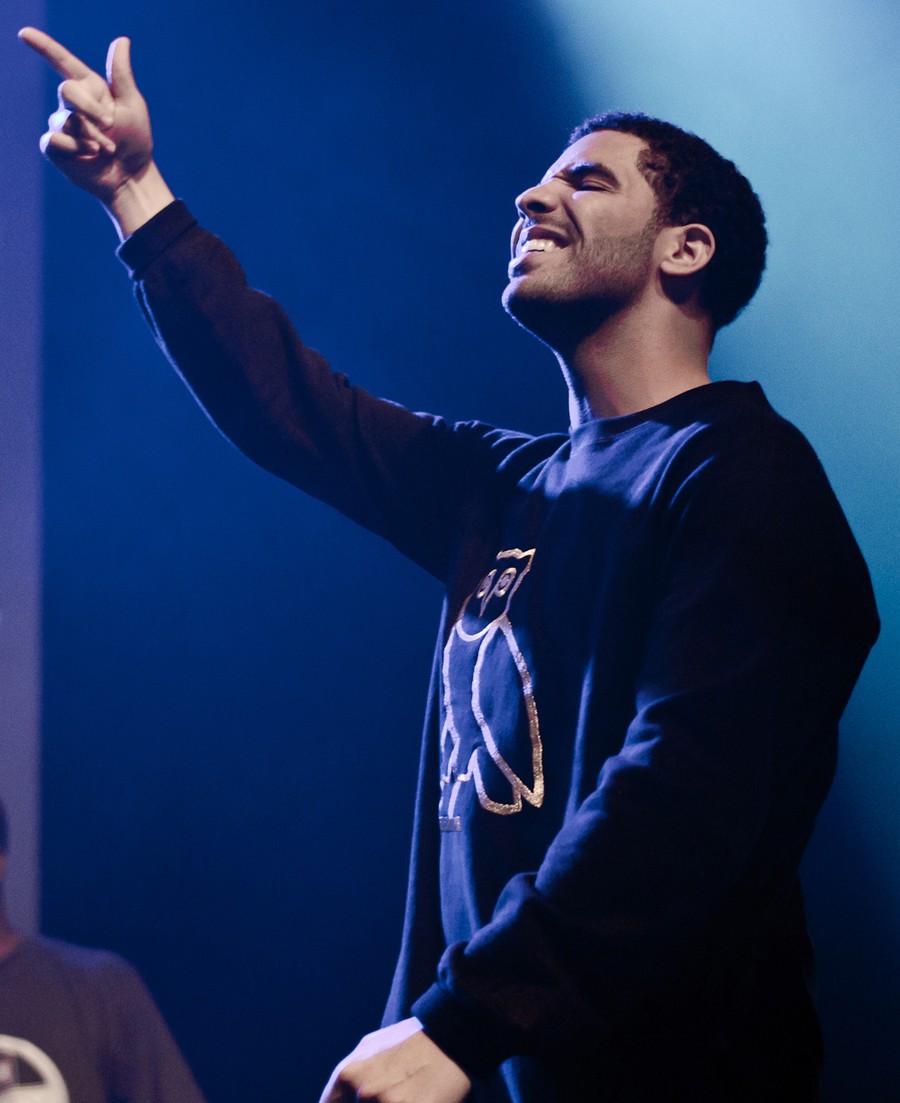 The hardest part about being a Drake fan is being a Drake fan. There are all sorts of challenges to his legitimacy: he’s soft, he’s too sentimental, he’s girly—a criticism that amounts to the adult equivalent of a fear of cooties. There are those who believe his somewhat affluent background disqualifies him from understanding real experience, as if good rap music can be restricted to a judgment of social class. There are those who find his songs about feelings as a betrayal to what some actually believe to be hip-hop’s academic and political responsibilities; these are the listeners who often feel obliged to align their political preferences with their artistic ones. And there are those who treat Drake’s ability to sing and rap as unfaithful to the genre’s tradition of rhyme-based cadences. There’s a great irony behind these depictions of Drake: those who try to portray him as “weak” or somehow out of touch with rap music’s purisms treat emotions and melody as un-adultlike, and therefore succumb to the characteristics they try to assign.

His new album Nothing Was the Same (released September 24th on OVO Sound) looks to quell any remaining opposition to his current position as the king of rap music, pop music’s new center of gravity. NWTS is made for a dark room, the speakers surrounding you, no one around. The album’s universe centers on resonant emotional circumstances, inward territory that rap music has rarely tried to enter: relationships that couldn’t be, past feelings chased by fleeting memories that can no longer simulate the necessary intimacy. But unlike Drake’s previous, and much more melancholy, masterpiece, Take Care, he counters vulnerability with confidence, adding muscle where bruises used to be. The album is less a continuation of Take Care than it is a culmination of both of Drake’s worlds: the tenderness of his emotional life and the triumphalism of his commercial success.

The 26 year-old Drake is primarily interested in rap music as a home to solitude and reflection, and his longtime producer and best friend, Noah “40” Shebib, applies gloomy, ethereal soundscapes (or “hermetic safe spaces,” as New York Times music critic Jon Caramanica calls them) to fit Drake’s inwardness. A signature of 40‘s production is editorial: what’s there is as important as what isn’t. Much of what could be considered Drake’s sound therefore relies on spatial elements; everything sounds roomy. That sound can be traced to Toronto, his hometown and the site of a burgeoning music scene that has adopted 40’s aesthetic as its own. Other Toronto artists like The Weeknd and PartyNextDoor have made careers amending 40’s production style; The Weeknd’s reclusive debut album, Kiss Land, is a perfect example of how to skillfully appropriate Toronto’s gothic sound. NWTS is the new masterwork of this field. Drake does bring on other producers to contribute--Boi-1da, Hudson Mohawke, and Toronto’s Nineteen85 to name a few--but 40 oversees everything, tailoring his designs to suit Drake’s sonic palate.

Every song on NWTS is good; even the overplayed “Started From the Bottom” sounds refreshed in an album setting. The album opener, “Tuscan Leather,” starts with a cinematic crescendo and ends with synths that melt below a series of boasts: “40’s on his Martin Scorcese!” “Furthest Thing” borrows the production of a young Kanye West, shifting from floating, darting notes to a triumphant ending that features the parading drum beats and high-pitched choruses distinctive to Kanye’s early work. Like with Kanye, stylistic boundaries disappear for Drake within the scope of his versatility. Kanye even showed up to Drake’s annual OVO Fest this year to bestow praises on him, an indication that Drake’s place at the top is secure. At one point Kanye claimed that Drake’s success was the reason he and Jay-Z made the album Watch the Throne.

As the album progresses, Drake becomes more flexible and adventurous, his ear adjusting effortlessly to the demands of his melodies. He’s one of the few rappers who understands how to decorate this genre with melody. A primary example of this mix is the pairing of “Wu-Tang Forever” and “Own It.” “Forever” doesn’t offer much tribute to its namesake, opting for smoky, creeping series of piano chords and muted drums underneath lines about avoiding the experience of the streets. Even Drake’s boasting on “Forever” is emotionally conflicted, saddled with self-awareness. The “it’s yours” refrain in “Forever” leaks seamlessly into “Own It,” which ends with him pleading that line inside a fading outro. Drake isn’t as interested in the narrative structures that rap fans obsess over with artists like Kendrick Lamar; his central project is his musicality. “Forever” and “Own It,” songs about nothing in particular, are as challenging a pair of tracks as any two of Lamar’s tales.

The most stunning song on NWTS is “Connect,” produced by the brilliant Scottish DJ Hudson Mohawke, a close Kanye collaborator and a seminal influence in modern electronic music. “Connect” is one of Drake’s greatest victories, an ode to his ability to be emotionally complicated and still entirely relatable: the song’s fear of irrepressible attraction, of false starts and lurches, missed calls and mixed messages, isn’t exclusive to the rich or famous, or even the moody. These feelings are essential to the fabric of serious pop music, and even more important to rap, a genre that often prizes self-effacement over vulnerability. Backed by Mohawke’s laser-sharp synths, Drake’s confessions are things that shatter everyone: giving in to the temptations of an emotional life that’s seemingly impossible to organize; trying to correct a past life that may have never existed. His fear of rejection is as real to him as it is to the rest of us.

But there’s something else on this album that distinguishes it from Take Care’s heartbrokenness: Drake sounds more combative, more resilient. A major mistake music fans make with Drake is assuming that he’s all tears. His verses on Waka Flocka’s “Round of Applause,” Migos’ “Versace,” Rick Ross’ “Stay Schemin’,” and French Montana’s “Pop That” show that he’s just as interested in (and good at) sustaining his presence on the radio and at parties as he is in darker, more isolated places. On “Worst Behavior,” the sixth song on NWTS, Drake sounds as rabid as ever. The subject is his dad, who he was separated from at age five and still feels a heavy frustration toward. The “never loved us” line that echoes throughout is dominant, and it pairs perfectly with the song’s rattling, growling urgency. The jarring “Too Much,” featuring the off-kilter vocals of SBTRKT’s Sampha, returns to the frustrations of family life: “Guess since my text message didn’t resonate, I’ll just say it here / Hate the fact my mom cooped up in her apartment, telling herself / That she’s too sick to get dressed up and go do shit...Shit got me feeling pinned down, pick the pen up or put the pen down, / Writing to you from a distance like a pen pal, but we’ve been down.”

Drake is also at the heights of finesse on NWTS. He floats above and around beats as deftly as he ever has, diminishing the need for guest features. His voice sounds deeper and more wholesome—something that allows him to be more agile in mixing song and rap by himself. “The Language” is representative of this balance. And he’s just as inclusive as he needs to be. The up-and-coming Jhené Aiko sings beautifully on “From Time,” and Majid Jordan’s contributions on the flawless pop archetype “Hold On, We’re Going Home” are perfectly placed. There is one mistake: Jay-Z’s short, object-obsessed appearance on the hazy “Pound Cake” sounds as hollow as his recent album, Magna Carta Holy Grail.

Unlike Jay-Z’s career trajectory, Drake’s outlook hasn’t been completely altered by exposure to fame and luxury. He’s still immersed in the more complicated, and human, features of private life. Nothing Was the Same represents another Drake-led renaissance in hip-hop, an affirmation of the genre’s new inward-looking disposition that views emotional complexity and lush, minimalist production as essential to its evolution. Rap music is in a better place with him calling the shots, which, with a healthy dash of ambivalence, is exactly the way he wants it: On “Tuscan Leather,” he raps: “Past the present when you have to mention, / This is nothing for the radio, but they’ll still play it though, / Cause it’s that new Drake, that’s just the way it go.” It’s always nice to know why you’re on top.