The South African artist kicks off the new center for international humanistic research. 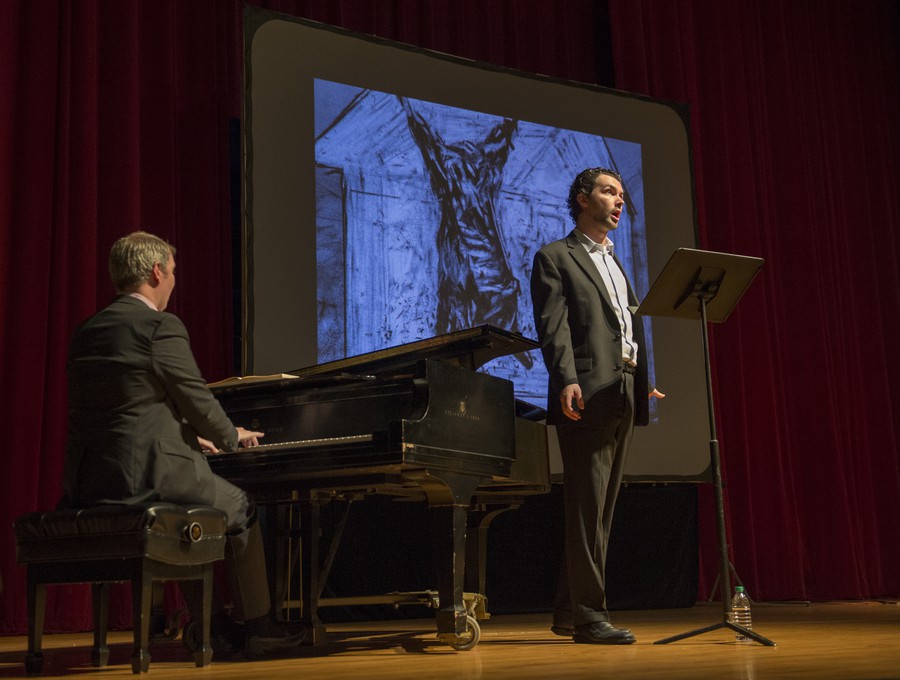 Just over a year after the Neubauer Family Collegium for Culture and Society was announced in summer 2012, the new center for humanities and humanistic social sciences research hosted its first public lecture in a full Mandel Hall Thursday evening on what President Robert Zimmer called an “important day for the University of Chicago” in his introduction.

Renowned South African artist William Kentridge delivered a multi-genre artistic performance for the Collegium’s inaugural address. He presented still drawings and stop-motion animated films of shots of drawings he made over the pages of large books. The films were shown multiple times, each time with a different sound in the background—various noises or voices, and later musical accompaniment by Craig Terry (piano) and John Irvin (tenor) from Chicago’s Lyric Opera.

Referring to one animation, he said, “Here we have just images of a dictionary with turning pages, but we project onto that, or will onto that, some relationship of the sound to the pages. There’s a desire that is almost irresistible to make a connection between the things we are hearing and seeing. So there has to be a way of realizing our activity, or agency, in constructing that.”

Observing the viewer’s tendency to “sew the song to the image,” Kentridge remarked that “there’s an accommodation that takes place between the world coming toward you from the sheet of paper…and your projection of a relation onto that image.” He said, “That’s our meeting of the world halfway.”

Kentridge’s suggestion went beyond merely describing perception. Behind this observation, he said, “is a fundamental way that we always operate in the world.… It is how we construct for ourselves…what appears to be a coherent single subjectivity.” The question of his project, Kentridge said, is to ask, “how far can one stretch that astonishing construction across fragmentation…without losing a sense of meaning?”

The multimedia approach behind Kendrick’s art reflected the Collegium’s vision for humanistic research, according to Associate Director Josh Beck. “There’s a kind of harmony in the way he approaches his work and how the Collegium aspires to stimulate collaboration and creative transcending of fields, of disciplines,” he said.

Named in honor of the $26.5 million gift of Joseph (M.B.A. ’65) and Jeanette Neubauer, the new center is the product of over two years of discussion by University faculty looking to establish Chicago as an international hub for innovative humanistic research.

The Collegium’s unique aim begins with its name: collegium, Latin for “colleagueship” or “partnership” in the broadest sense. Rather than simply providing financial support for research in a particular discipline, as many conventional research centers do, the Collegium provides funding and administrative support primarily to interdisciplinary research projects sponsored by faculty from different disciplines, making it a “center of centers.” Moreover, the Collegium has explicitly international ambitions, favoring projects that require collaboration with faculty elsewhere around the world and “ask grander kinds of questions,” according to Josh Beck.

“It’s really based on a belief that when humanists come together and do their research together they ask grander kinds of questions and seek more ambitious kinds of answers because there are different perspectives from different fields, different countries,” Beck said. “There are more people at the table, and that changes the nature of what research questions they pursue.”

While research is the Collegium’s focus, Beck stressed that the center’s mission would also enrich the University more broadly.

“The core of this is about promoting collaborative faculty research that can transcend boundaries. But the impact is much bigger. The impact is felt all over campus,” he said, citing the large number of students who are researching alongside the faculty on Collegium projects.

The Collegium’s permanent home at East 57th Street and South Woodlawn Avenue in the former Meadville Lombard Theological Seminary is not yet completed, but operations are underway in shared space in the Regenstein Library. Scheduled to open in early 2015, the space will feature art and media exhibitions related to Collegium projects as well as a video conferencing space for faculty to collaborate with researchers abroad.