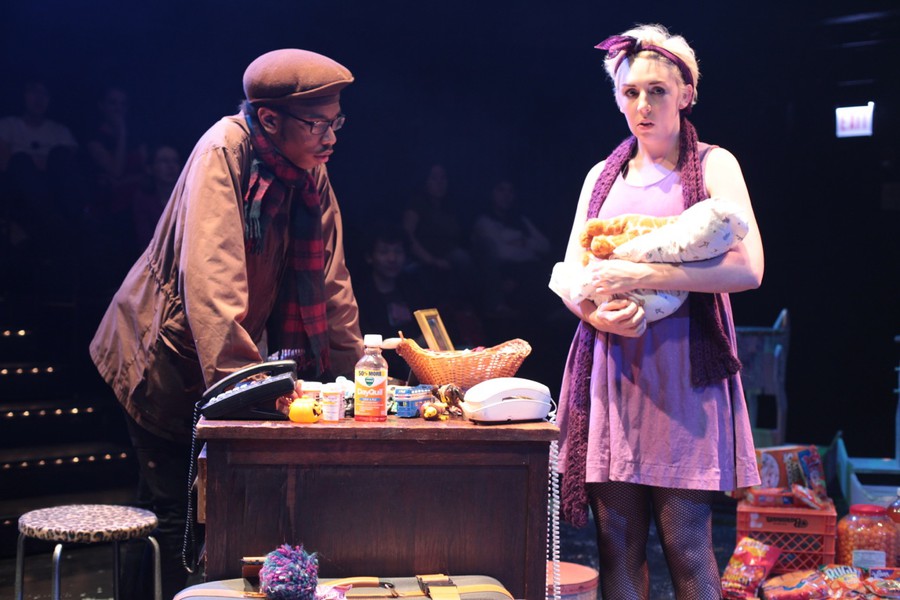 Mannequin limbs hang down from the ceiling, blanketing the performance space, while rocking horses, a messy office desk, a leopard tuffet, and a bathtub delineate the four corners of the stage. These are the bounds of the set, which the numerous characters in Hotel Nepenthe inhabit. Connected in an elusive manner, the protagonists of David Kuntz’s play don’t initially seem to have much concretely in common. What could a politician, his wife, a prostitute, a bus driver, and a taxi dispatcher possibly have in common except for a link to the Hotel Nepenthe? But as the plot thickens and mysteries arise through interactions between the characters, it becomes evident that they are all interlinked.

Second-year Scarlett Kim, the director of the TAPS/UT production, believes that the black box theater creates an immersive environment as it allows the four corners of the stage to give the impression that all action is taking place everywhere. She finds that the black box set is helpful for incorporating the audience into the play.

To enhance the audience participation in the play the student cast staffed a position called the “sensory designer,” who was in charge of figuring out how the production could tap into other senses aside from the visual. One of the first things the audience will notice when coming into the theater will be the mints on their seats, which mirror the experience of walking into a hotel room. One scene in the play also uses a film camera, and Kim explains that staging the perspective of the observer by film also adds another layer to the theatrical experience.

The dissected mannequins add to the general crazy vibe developed throughout the play, and represent the disembodied self, explains Kim. The mannequins illustrate the interconnection between characters. Just as each character is a version of another, so too are the mannequins’ artificial copies. The rocking horses, which serve as the only vehicles on stage, lend a demented, childish mood to the production.

The relationships among the characters in Hotel Nepenthe determines which corner of the set each is likely to play in. While the messy office desk signifies business, the bath symbolizes sex, the stool is a neutral relationship, and the rocking horses are for strangers in cars. While some particularly surreal scenes take place in the center of the four-times divided stage.

At first glance the stage is defined by clutter, and, since no directorial decision is taken lightly, Kim explains that the clutter parallels the an archeological site, in which the characters are desperately trying to find meaning in themselves, trying to discover their “bare” selves.