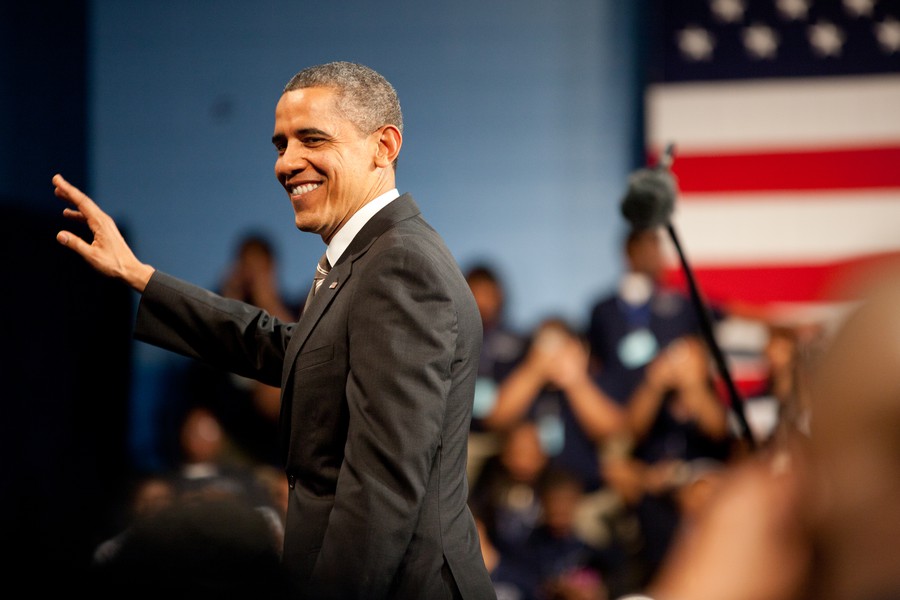 President Obama returned to the South Side on Friday to address the social and economic dimensions of gun violence in Chicago and across the nation. Speaking at the Hyde Park Career Academy High School on East 62nd Street and South Stony Island Avenue, he commended the University of Chicago Crime Lab’s Becoming a Man (BAM) initiative for providing a supportive environment for troubled youth.

The speech was during one of three stops the President made last week to push for the second-term agenda detailed in his State of the Union speech, which included calls for policies to alleviate poverty and strengthen the middle class as well as gun control. The visit was also regarded as a response to the murder of Hadiya Pendleton, a 15-year-old girl who performed at the President’s inauguration, and who, for many, has come to symbolize the harrowing cost of gun and gang violence.

Pendleton’s mother was among the 700 attendees of the speech. Five UChicago undergraduates affiliated with the Institute of Politics were also in attendance at the closed event, accompanied by Institute director David Axelrod.

During his speech, Obama spoke to some of the unique problems that Chicago brings to the national discussion, placing the city’s gun crime rate in context with other episodes that have garnered significant media attention.

“Last year, there were 443 murders with a firearm on the streets of this city, and 65 of those victims were 18 and under. So that’s the equivalent of a Newtown every four months,” he said.

Steering away from policy approaches to addressing the gun problem, the President focused on the need for a multidimensional approach to gun crime prevention, citing the BAM initiative. Obama discussed his meeting with some of the program’s participants, which took place before his speech.

“[W]hat I explained to them was I had issues too when I was their age. I just had an environment that was a little more forgiving. So when I screwed up, the consequences weren’t as high as when kids on the South Side screw up. So I had more of a safety net,” he said.

Roseanna Ander, Crime Lab executive director, said she found the President’s appraisal of community initiatives like BAM to be encouraging.

“We absolutely have a sub-optimal federal policy right now on guns, and a lot of the things that [Obama] outlined are really important and promising. But also in recognizing programs and interventions like the BAM program, we don’t have to wait for Congress to do the long and tedious work…to see immediate benefits,” she said.

The President also talked about the importance of economic development in preventing gun violence, referring back to measures proposed in his State of the Union address to curb poverty rates and alleviate the plight of those still reeling in the aftermath of the 2008 recession.

“Even though some cities have bounced back pretty quickly from the recession, we know that there are communities and neighborhoods within cities or in small towns that haven’t bounced back. Cities like Chicago are ringed with former factory towns that never came back all the way from plants packing up; there are pockets of poverty where young adults are still looking for their first job.”

Also in attendance was Dallas Donnell (A.B. ’10), web coordinator for the Black Youth Project, the Chicago-based political engagement website founded by political science professor Cathy Cohen that launched an online petition on the same day of Pendleton’s murder. The petition, posted on Change.org, called for the President’s return to Chicago to discuss gun violence and garnered over 48,000 signatures.

Six people were shot in Chicago on Friday afternoon and Saturday morning. Just hours after the President’s speech, Janay McFarlane, the sister of a 14-year-old student at Hyde Park Career Academy who was seated behind Obama during his speech, was shot in the head in North Chicago, a suburb 25 miles north of Evanston.