At Logan, directorial screening keeps the true Bird out 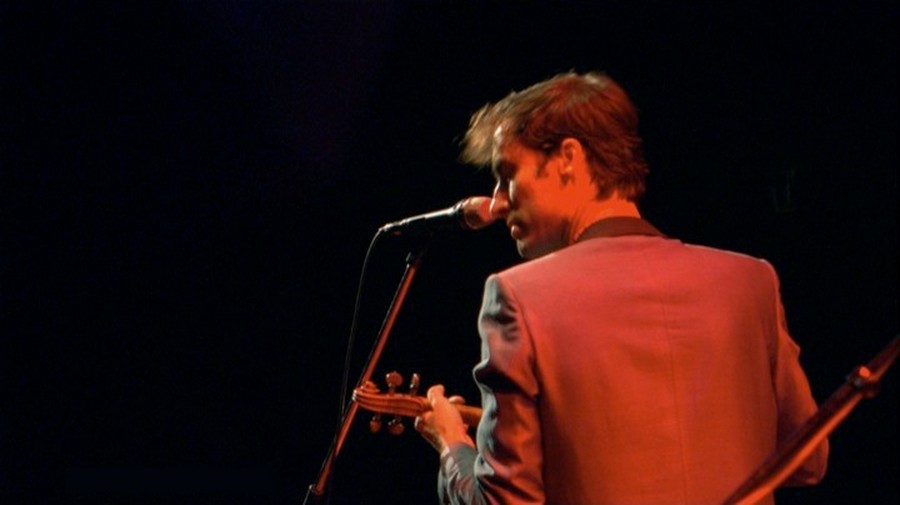 Xan Aranda, the director of Andrew Bird: Fever Year, was at the Logan Center on Saturday night to field questions from the audience after a screening of her film. The 80-minute documentary, initially released in 2011, follows musician and songwriter Andrew Bird on a yearlong concert tour. The film can be bravely authentic or slightly boring, depending on how much you appreciate Bird’s music. Half of the documentary consists of scenes from his concert performances: Bird sings, fiddle and violin in hand, with his old-timey live sets and temporary band. The fact that such a large part of the film shows Bird on tour is in keeping with one of the major themes in the film as a whole, which is “the creative process,” according to Aranda, who is also a longtime friend of Bird. The film is not intended to address Bird’s personality, yet he comes off as immensely interesting through the piecemeal interviews and scant voiceovers we are given. The merit of the film is that it piques the viewer’s appetite for Bird, and its flaw is that it does only that—we do not get to know Bird much, and, consequently, can’t get too deep into the professed theme of “creative process.”

The more I got to know Bird through the film, the more fascinating he was. By the end of the film, I was almost in love. Bird has a strong indie vibe to him that is curiously down-to-earth. He is lean, slightly hunched, performs with his shoes off (his socks mismatched, one green and one red) and, often, with his eyes closed, as if his music transports him to the place he has made for himself—a barn in west Illinois, which is featured in the film as his creative center.

What is most charming about Bird, though, is his unique way of talking. He speaks mostly in a very matter-of-fact manner, yet somehow he has a knack for making his words sound philosophical. When he went back to his barn after his yearlong tour, the zucchini he had planted before leaving home had grown to a gigantic size. He chuckled and said, “Nothing should get this big. Things are best when they are mini-size, you know? Like those cookies they sell in the supermarket.” If you connect it to what he said earlier in the film—that his music is going big to the point that all these tours are detracting from his creative effort—then this comment is probably not just about zucchini. The whole film is peppered with just such ordinary, yet extraordinary, remarks that slowly gather momentum.

The least interesting parts of interviews with Bird, ironically, are his remarks about his creative process. Bird is a musician with a very strong work ethic (hence his yearlong tour), so the name of the film is a clever pun on fever as an illness and as the degree of popularity Bird has reached. However, the creative process shown in the film is orthodox. At times, Bird says, he hides in his barn to take a break and find inspiration; he also likes performing onstage because there is more human connection—all honorable, but unmemorable sentiments. The only story that intrigued me was one about how, when Bird started out, he mailed something like a self-recommendation letter, along with his CD, to an indie record label. The letter was apparently a sort of manifesto about music. I could not have paid enough to be able to peruse that spicy letter, with all its youthful ideals and ignorance, but the film, unfortunately, glossed over it.

In the Q&A session following the screening, Aranda addressed the question of narrative and stated that the presence of a storyline does not concern her. Several comments about not getting enough of Bird’s personal story cropped up. One viewer specifically said that he wanted to hear more stories about the engaging Michael Lewis, one of the band members in the film. Aranda replied that she was aware that the viewer was not going to walk away knowing every story about Bird, but that she did not care about having a plotted story. The audience member mentioned that Bird had commissioned her because he knew she would strike the right balance between understanding what he wanted the film to convey and not being afraid to push him toward new territory. Her firm tone reassured the audience that minimizing the film’s narrative elements was a wise, conscious decision.

This simple documentation of performance and shedding of storylines could be construed as courageous, but it could also be a cop-out. In the drama-dominated (indeed, melodrama-dominated) entertainment world, giving the audience the world in its plainness—just Bird singing, or talking about his schedule—is a risky move. It takes guts to showcase life’s inevitable banalities. It could also be that the gist of an idea—what exactly matters in the so-called creative process—has yet to be discovered.