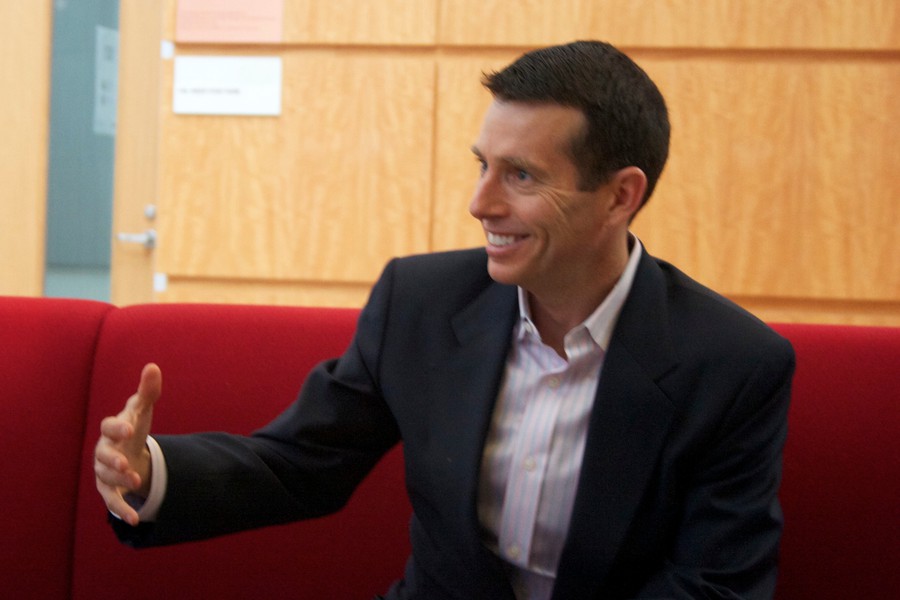 As Senior Advisor to President Obama from 2011 to 2013, David Plouffe said his challenge was “to make sure you’re giving advice that’s consistent with what he’s promised the American people and [with] his record.” Plouffe also served as campaign manager for Obama’s 2008 presidential campaign and, according to the Chicago Tribune, was “the mastermind behind a winning strategy.” Before giving the keynote address for the Institute of Politics panel “High Tech and Highly Targeted: Inside the Obama Campaign’s Digital War Room” at the Booth School on Saturday, Plouffe sat down with the Maroon to talk about privacy in politics, how his college classes informed his career, and his old boss.

Chicago Maroon: What is the purpose of the Senior Advisor to the President?

David Plouffe: In our case it was someone to help with the President on matters of strategy, matters of communication. For me, when I was there for two years, we also had a Presidential campaign, so I was focused on a lot of involvement there. Generally, it’s just to help design your strategy around certain efforts, make sure you’re giving advice that’s consistent with what he’s promised the American people and his record. A lot of it is looking around the corner in terms of how certain engagements with Congress may play out, and sometimes those are easier, because you have a chance of cooperation. Other times, you are dealing with a recalcitrant opposition and you’ve got to figure out how to make that move.... Senior Advisor is just one person in a big White House in a big government.

CM: What kind of effect did your undergraduate education have on you as a consultant and advisor?

DP: I think the study of political science is of value, but it’s no substitute for real world experience. I learned a lot in my undergraduate days in terms of macroeconomics, microeconomics, constitutional law—the classes I took that weren’t necessarily just about politics that helped inform my worldview. The magical formula here is great education that you’re able to use, not all of it, but a lot of it into your professional life, married with real world experience.

CM: Do you think it’s necessary to have a college degree to get into politics?

DP: No; I think that it’s not. We still have many elected officials who do not. The data is clear—college graduates are going to succeed economically in our country in a way people who don’t have college degrees are not. Having a college degree is the surest way to having a job, and the kind of job where you can support an income with a family. I think everybody should have a college degree, but, in terms of doing the actual job, this doesn’t just go for politics. It’s the combination of bringing everything you learned in the classroom and having a college degree that allows you to get a better job and to pursue further degrees. A big challenge now is we can’t have college keep going up five or six percent a year. The federal government can’t keep up with the rate of inflation from loans, and families can’t afford to. Getting college loans costs under control is going to be a crucial part of our economic future over the next few decades.

CM: In what ways did your personal views on events in Washington affect the way that the President saw things?

DP: All of us who serve the President are just there to give him our best advice. He’s the one that ultimately makes the decision. I think that people like David Axelrod and I—we have a long history with him—so there’s almost a shorthand. We’ve been through a lot of situations together, challenges together. You know what he believes, how he’s made decisions in the past. So that’s very helpful, but in any White House you’re going to have a lot of people who don’t have that history who have policy expertise, or look at our Cabinet bringing people in from outside of Washington. So it’s a healthy balance. The Presidency is a very lonely job in a way because you get a lot of advice you ask for and plenty of advice you don’t ask for from outside quarters, but ultimately anything that enters the oval office…if it was easy, it was solved somewhere else. Every decision, every situation, is of huge magnitude, and we all give advice, but we don’t have that weighing on us like the President does.

CM: How important is it for you to offer a contrasting view to President Obama?

DP: The President has a lot of people who just throw rose petals in the way all the time. That was not what David [Axelrod] or I did. It was our job to be candid, to offer unvarnished advice, to be willing to deliver not just good news but bad news. That’s a very important part of this, because presidents hear from people all day long who are just singing their praises, so you need people in those quiet moments, when decisions have to be made, who can be honest. We benefit because we’ve gone way back with him, and there’s a trust there, and he has to have the ability to be candid if he thinks you’re not doing a great job. So it works both ways.

CM: President Obama’s White House has been criticized for a lack of transparency. What does privacy mean in politics?

DP: I think our approach has been to be as transparent as possible. We’re the first White House to release our visitor logs, for instance. You look at fundraising during the campaign: We voluntarily released the people who raised money for us. Our opponent did not. So I think we’ve been very transparent. Obviously, there are matters of national security that have a high sensitivity. I think the standard should be to try and seek transparency. You’re not always going to be as transparent as everyone would like, but we try and meet that standard when it’s not going to compromise people’s lives and national security objectives.

CM: You’ve spoken out against the insider tendencies of Washington, but in what ways did you have to give in to the system and the tradition in order to get what you wanted?

DP: In the campaign, not at all. We ran a grassroots campaign that was very focused on not the Washington Beltway, but what was going on out in people’s lives. We relied on our grassroots volunteers that were really the engine of our campaign. In terms of Washington itself, in terms of getting things done, there’s still going to be an element of the insider deal. One good thing about technology is that Washington is a more transparent world than it used to be—so many people are blogging themselves or on Twitter—and the inside deal is a little harder than it used to be. Though there is still some of that. I think the art is how you accomplish some of that without betraying your principles.... You’d like our system to work where everyone just stepped back and said, “What’s in the [interests of the] greater good of the country at this moment?” But it doesn’t work that way. There are plenty of people who think that way, but other people think first about their district or their state or their own political situation. So it’s a challenge to navigate in a way that’s transparent, that’s true to your principles in a very messy democracy where you have a lot of elected officials who obviously are thinking about the national interest, but also have their own self-interest. It’s difficult.

CM: What is it like working with President Obama in the White House?

DP: He is a remarkably sane human being. He’s measured, he’s good tempered, he deals with crisis well, he’s got a great sense of humor, and I don’t think you can overstate how important that is, because he’s a calm captain. We hit a lot of rocky waters in the White House, so to have a calm captain…. There’s a lot of people out there who can be mercurial, who can be erratic, who can lose their temper over small things. He doesn’t do any of that, so you never have to worry about how he’s going to react to something. You just can do your job.