FLY, SHE continue calls for trauma center with flower vigil 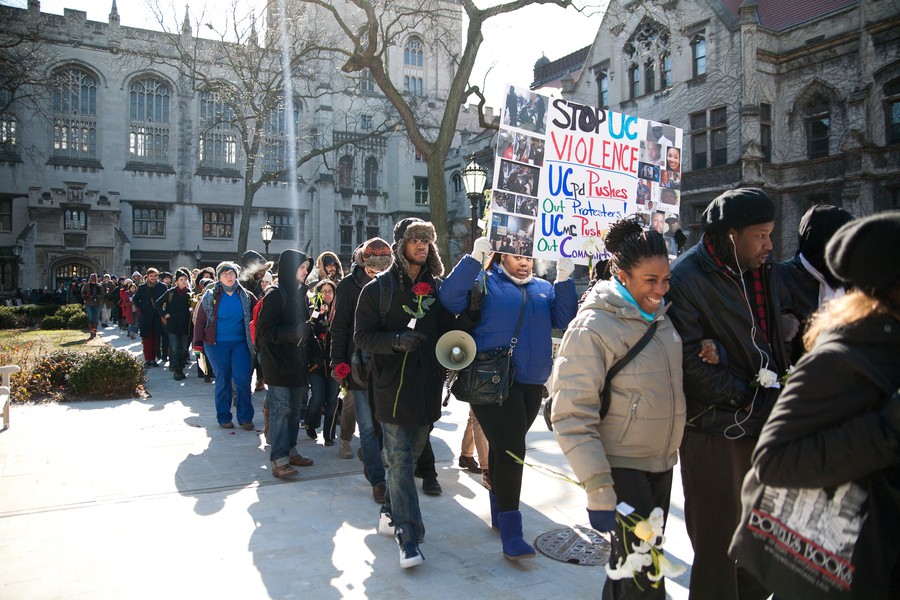 Fearless Leading by the Youth (FLY) and Students for Health Equity (SHE) held a flower vigil in remembrance of South Side gun violence victims to reiterate their belief in the need for a trauma center at the University of Chicago Medical Center (UCMC) on Friday. University members and South Side residents attended the demonstration, totaling nearly 200 participants.

Attendees of the vigil marched from the north entrance of Harper Memorial Library to the Administration building, where each person walked single file up the stairs to President Zimmer’s fifth-floor office at the instruction of Lynda Daher, Dean-on-Call during the protests. There, they lay their flowers by a poster created by FLY members featuring photos of gunshot victims and pictures of the January 27 protest. Belinda Vasquez, associate dean of students, was present to receive a faculty letter addressed to President Robert Zimmer and Provost Thomas Rosenbaum and a petition addressed to the general administration from the demonstrators.

Afterward, participants gathered on the east side of the Administration building to chant. The chanting lasted nearly 20 minutes, which, according to Darrius Lightfoot, co-founder of FLY, was longer than planned.

“We just planned to do a few chants and then leave but it turned to something more and I loved it. I loved it,” he said.

Four participants spoke to the group prior to the march.

“We go on because we believe we can and will live in a world where…hospitals will be equipped to serve the needy in their communities,” third-year SHE member Michael McCown said in a speech.

Daher said the role of the vigil was to “make sure this protest is successful.” She verbally offered her capacities as a Dean-on-Call, including answering questions about her role as Dean-on-Call.

Around the time the vigil began, Rosenbaum issued a second statement detailing the University’s plans to address the protest and accompanying arrests. According to the statement, UCMC leadership will host a discussion on “the role of University of Chicago Medicine in providing healthcare to the South Side of Chicago including inpatient, outpatient, emergency room, community programs and trauma care.”

Zimmer said in an interview with the Maroon that the “leaders who are most responsible for the work at hand” are delegated to handle certain issues. For instance, Rosenbaum, as the University’s chief academic officer, led the administration’s response because students and faculty were involved in the protests and subsequent events. Zimmer also said that the decision to have a Level-I adult trauma center is for the UCMC to make.

Last night, Marlon Lynch, chief of UCPD, and Eleanor Daugherty, assistant vice president of student life, were present at the Graduate Student Council meeting. According to SG minutes, Lynch and Daugherty discussed their roles in the coming weeks. Lynch will be active in most conversations hosted by SG and the administration.

SG will begin hosting small-group discussions today, which will include members from social justice and cultural RSOs, a member of the SG slate, Lynch, and Daugherty. The discussions will continue through the week, which SG hopes will lead to an open forum next week, according to Douglas Everson, SG vice president of administration.

Rosenbaum also said that the administration has planned three faculty-led dialogues to take place in the coming weeks, unrelated to SG’s efforts. The faculty participants are political science professor Michael Dawson, director of the Center for the Study of Race, Politics and Culture, associate professor of medicine Doriane Miller, director of the Center for Community Health and Vitality, and associate English professor Deborah Nelson, deputy provost for graduate education.

In the meantime, FLY and SHE members plan to press forward with their demands.

“Can’t throw all of our cats out of the bag but yeah, we definitely have plans,” she said.

SHE and FLY are hosting an informational panel on trauma care in Chicagoland at 6 p.m. tonight, in Kent 107. According to Olivia Woollam, fourth-year member of SHE, alderman Anthony Beale and representatives for some of the candidates for Jesse Jackson’s vacant congressional seat will be in attendance.