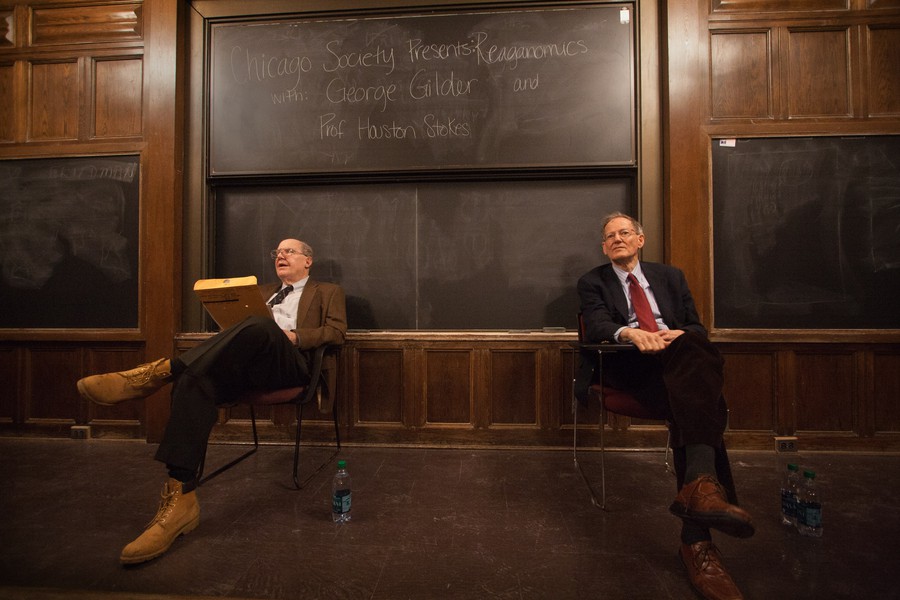 George Gilder, whose 1981 book Wealth and Poverty made him the most cited author of the Reagan administration, and Houston Stokes (Ph.D. ’69), professor of economics at the University of Illinois at Chicago, spoke about Reaganomics and the current U.S. economy at a talk hosted by the Chicago Society last night.

Gilder sat down with the Maroon after the event to talk about the importance of entrepreneurs in the economy and how the government can support them, as well as immigration and problems in the Obama administration.

Chicago Maroon: You spoke during your talk about how the key to the economy is creativity founded in entrepreneurship. Why is this creativity so important?

George Gilder: The vast majority of the advances [in the economy] are immeasurable; they come from outside of the economy. They’re exogenous. Robert Solow, who is the leading theorist of growth, assigns some 80 to 90 percent of all of the growth to these exogenous factors, and he thought innovation summed it up. And he’s correct, but the vessel of this innovation is this entrepreneurial creativity.

CM: Would you say that an entrepreneur just starting a business is more important to the economy than a well-established business?

GG: Absolutely. All studies show that the bulk of new employment comes from companies with less than 10 people. In other words these are new companies and these companies are supported by venture capitalists, which generate some 21 percent of all GDP….When you see then that more than one-fifth of GDP is attributable to venture-based enterprise, it shows that entrepreneurial creativity is the heart of economic growth.

CM: During the event, you also spoke about the mass emigration of highly skilled people. What do you think the current administration can do to stop this emigration?

GG: We’ve got 60,000 H–1B visas; these are people who are needed by American companies, and it’s just obvious to anyone who works in technology that we have a shortage of highly specialized skills….I think we can vastly expand legal immigration through opening up the H–1B process to green cards and citizenship for people who are studying at American campuses and people wanting to come to the United States from abroad. I think that would be tremendously beneficial and could easily be adopted, rather than focusing on attracting more welfare clients, which often seems to be the target of the Obama administration.