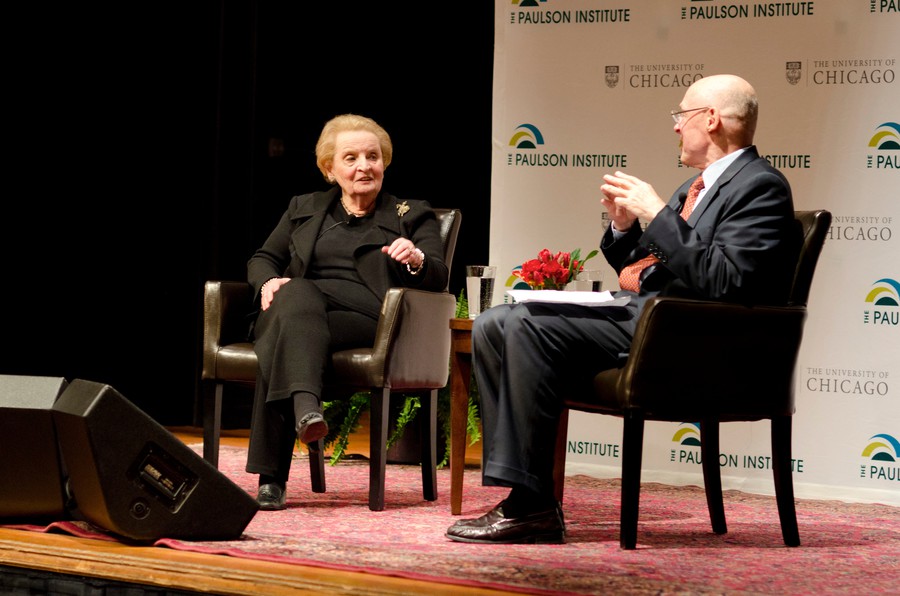 Former Secretary of State Madeleine Albright, the first woman to hold that position, spoke on her extensive career, the challenges of being a pioneer for women, and her thoughts on what she considers America’s “indispensable” role in the world at International House on Thursday. She was interviewed by former Treasury Secretary Henry Paulson.

Albright began by recounting her childhood during World War II. She was born in Prague but fled to London with her family after Hitler annexed Czechoslovakia. At the age of 11, she moved to the United States when her diplomat father was granted political asylum and became a professor at the University of Denver. She said the way the United States welcomed her family influenced her passion for the country and its role abroad.

Albright also provided a window into her decision-making process, particularly during the Balkan Wars in the 1990s. She said she believed strongly in military intervention because of the severity of the ethnic cleansing that spurred the conflict, but persuading the various other actors—including President Clinton, the U.S. military, and the NATO countries—was essential.

“One of the things was how to persuade the system. The State Department will say whatever it wants, but it has no airplanes,” she said.

Albright suggested that today’s diplomatic challenges are more potent than ever, particularly because the growing presence of non-state actors and the waning influence of nation-states have made diplomacy more trying.

“The tools that we have for diplomacy are not the ones that work against non-state actors, so we’re trying to sort that out. I think that’s the really hard part,” she said.

When asked about the recent revolutions in the Arab world, Albright said she hoped leaders will focus on how to sustain democracy, not just how to establish democracy.

Reflecting on her career and how she found success as a woman in what was once largely a man’s world, she said it often helps when there are multiple women in the same room and identified determination as an important quality for female leaders.

“It never occurred to me that I would be Secretary of State, but it did occur to me that I had to work hard and that when I said I would do something, I had to deliver.”