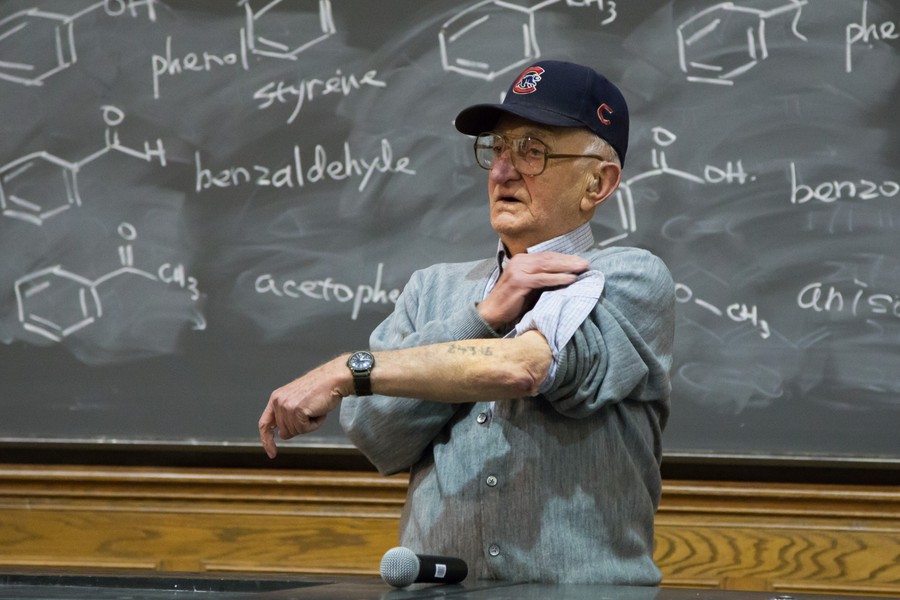 Holocaust survivor Ben Scheinkopf, 93, shared his story as an Auschwitz barber to a packed Kent Hall on Thursday night.

Scheinkopf grew up in Płońsk, Poland and watched as German soldiers turned his hometown into a ghetto in 1941, when he was a teenager. In December 1942 he, along with his parents and eight siblings, was relocated to the Auschwitz concentration camp in Poland. He saved his own life through his work as a barber: Every day, Scheinkopf and 25 other barbers shaved and cut the hair of over 1,000 prisoners.

“I was lucky I was a barber,” Scheinkopf said. “They needed a barber to cut the prisoners’ hair. Day and night the Germans brought Jews to Auschwitz and killed them all, but I had a good job.”

In January 1945, the Germans, realizing they were losing the war, liquidated the camps and marched all 10,000 prisoners, including Scheinkopf, for two days until they were shipped to smaller concentration camps in Austria.

“People were dead on the road because they couldn’t walk anymore,” Scheinkopf said. “If you made it, you had to die from starvation. I never believed I would come out alive.”

In May 1945, the American army liberated the camps. Scheinkopf, weighing only 60 pounds, was put in a hospital for 10 weeks and then moved to a displaced persons camp. He was one of only 30 Jewish survivors from the Płońsk Jewish community of over 6,000. Scheinkopf worked for three years as a barber at an American army base in Germany until he had the opportunity to move to the U.S.

“I was asked to stay by the Americans but I had to go,” Scheinkopf said. “I didn’t want to be stuck in Europe for another war. I had a new life in Chicago. The United States is the best country in the world.”

Upon his arrival, Scheinkopf began working as a barber at Sid Miller’s Barber Shop in West Ridge, now renamed Ben’s Barbershop. Since 1949, he has worked there for nine hours a day, six days a week.

“I’m a happy man,” Scheinkopf said. “I’ve raised three kids, I have food to eat, and I have a job. I ask people, ‘Why are you complaining?’ I’ll tell you my life story and you’ll stop complaining.”

Decades after the Holocaust, Scheinkopf believes he must continue to tell his story.

“I can do nothing with my memories, so I tell you,” he said. “When people in a country do nothing and let someone take over it’s wrong. People need to know that.”

The talk was organized by the Chabad Center for Jewish Life and Learning.