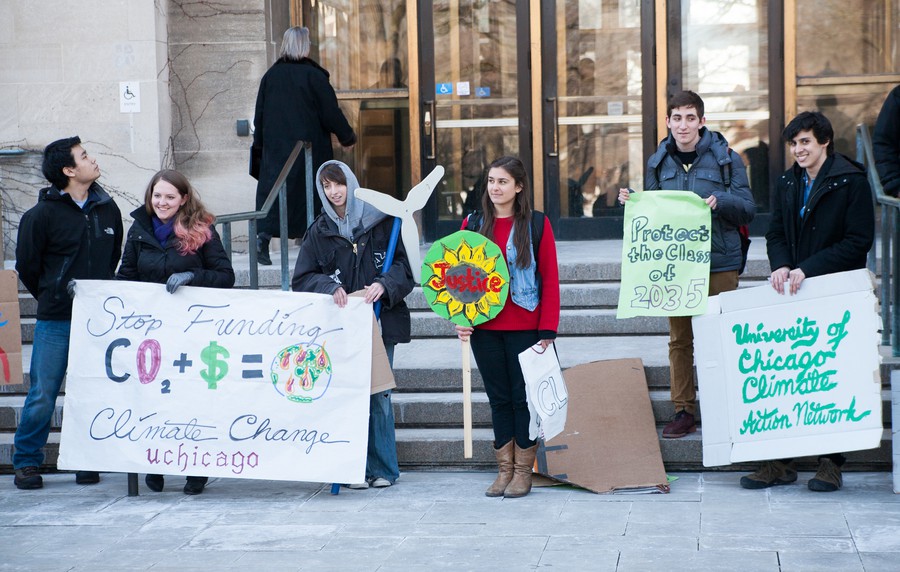 Stop Funding Climate Change (SFCC) demonstrated in front of the administration building and delivered a petition intended for President Zimmer urging institutional divestment from fossil fuel companies on Friday afternoon. The protest, which also called for a meeting between SFCC, Zimmer, and the Board of Trustees, was attended by approximately 30 people.

“Fossil fuel companies continue to drill, baby, drill, and mine, baby, mine…. As long as UChicago invests, UChicago says it is acceptable. Is this acceptable?” asked third-year Paul Kim, the SFCC coordinator.

Lynda Daher, director of the Bias Response Team, watched from the glass door of the administration building as she called a dean-on-call. SFCC’s advisor, Assistant Director of the Student Activities Center Arthur Lundberg, had previously informed her about the protest.

“I’m just here to make sure everything goes smoothly,” she said. Daher oversees the dean-on-call program.

Three at a time, attendees filed up to Zimmer’s fifth-floor office. Associate Dean of Students in the University for Student Affairs Belinda Vazquez, who had also been informed about the impending protest by Lundberg, was present to receive the petition. In response to demands that she supply them with a date within five weeks for the meeting to take place, Vazquez insisted she did not have access to Zimmer’s calendar.

As they exited the building, fourth-year SFCC member Sage Gerson called the response “a prime example” of a lack of transparency in the administration.

“I feel that the University is a bit behind the curve in adapting to climate change,” he said in an interview after the event. “The University, as far as I can tell, doesn’t have any doubts about climate change, but the question is whether they’ll put the money where their mouth is.”

“There is an unsettling contradiction in living and learning in a place that encourages us to act responsibly to others and to our environment while undermining this notion with its own actions,” first-year SFCC member Natalie Wright said in her speech marking the end of the protest. “We will keep at this until our school divests.”