Squad edges Oberlin, DePauw in return to Greencastle, IN

After finishing third at the ITA Indoor Championships two weekends ago, No. 5 Chicago (5–3) went back to DePauw’s home courts on Saturday and defeated Oberlin 6–3, before narrowly beating No. 8 DePauw (6–2) by a final of 5–4. 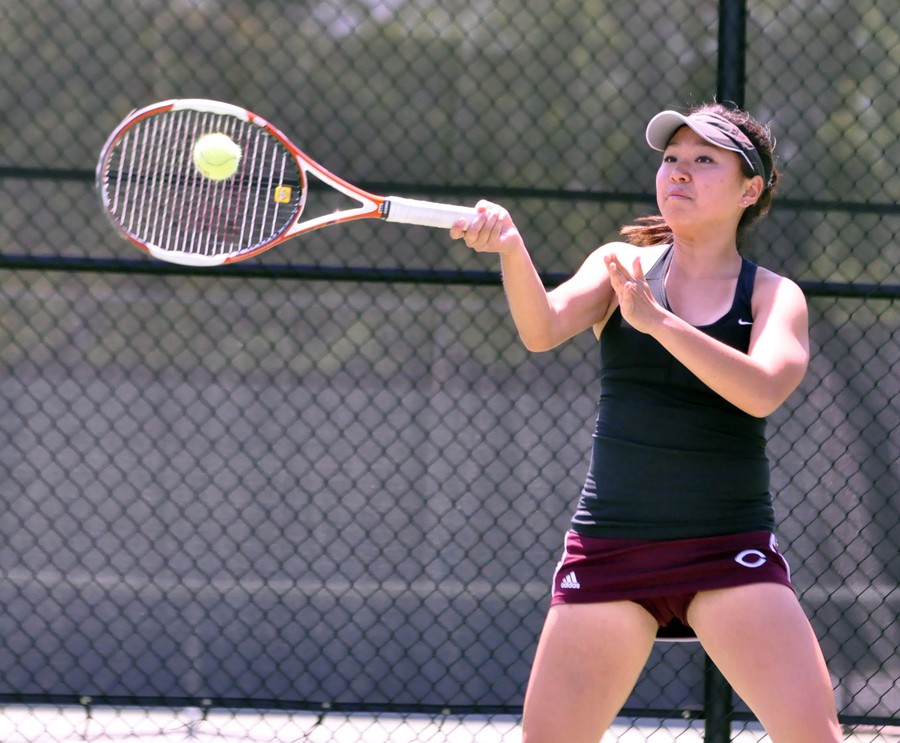 Greencastle, Indiana is the Maroons’ kind of town.

After finishing third at the ITA Indoor Championships two weekends ago, No. 5 Chicago (5–3) went back to DePauw’s home courts on Saturday and defeated Oberlin 6–3, before narrowly beating No. 8 DePauw (6–2) by a final of 5–4.

No. 1 doubles and No. 4 singles player, first-year Helen Sdvizkhov, did not play due to a back injury. Against Oberlin (5–4), the temporary lineup put the Maroons at a 2–1 deficit heading into singles. The lone doubles victory came from the No. 3 tandem of second-years Megan Tang and Maggie Schumann. While it was the first time the two have played together this season, the transition was smooth. The second-years won 8–2.

“I didn’t really feel like I needed to adjust, because all three of us ultimately have the same goals: Attack the net, hit deep cross-court shots, and get as many first serves in as possible,” Tang said.

Fourth-year Linden Li and second-year Kelsey McGillis fell short at No. 1, 8–6, while first-years Stephanie Lee and Sruthi Ramaswami, in their first time playing No. 2 doubles, lost 8–1. But the defeats did not hurt the Maroons mentally.

“Singles was the time for me to start over, and I think my losses in doubles fired me up to show the other teams that they can’t get past me,” Ramaswami said. “Since tennis is just as much a mental game as it is physical, I was determined to get out on the court after doubles as excited and ready to fight as I could be.”

The Maroons stormed the court in singles, winning five out of six matches to clinch the victory.

Chicago’s comeback win against Oberlin foreshadowed what was to come against DePauw.

For that match, Lee and Ramaswami played No. 3 doubles, while Tang and Schumann held the No. 2 spot.

Li and McGillis would win decisively, 8–3, but Lee and Ramaswami lost 8–5. The closest match would come at No. 2.

With a 7–5 advantage on Tang’s serve, Chicago looked for a 2–1 lead going into singles. Unfortunately for the Maroons, Tang could not hold, but Chicago still had two match points the following game. The Maroons could not convert.

“I know that I wasn’t being aggressive enough at the net during those match points—my nerves playing a decent part in it—and ultimately DePauw was more aggressive,” Tang said.

Once again, Chicago would have to turn things around in singles. With wins from Tang, Lee, and Schumann, and narrow defeats of Li and McGillis, the dual was tied 4–4, with Ramaswami splitting sets at No. 4.

The high-pressure situation did not faze Ramaswami though, and the first-year took a 4–0 lead to start off the third set.

“The energy from my teammates was awesome, and I gave it back to them by battling for every point and putting my all into the third set,” Ramaswami said. “I think my opponent started to break down a little mentally.”

Even with DePauw’s Caroline Emhardt giving Ramawami no pace on the ball through high and far ground strokes, the first-year managed to contain her opponent by maintaining her position on the baseline, focusing on ball movement, and attacking whenever she could.

“It felt great to be the deciding match, but I do have to say that it was a team effort,” Ramaswami said. “My teammates got me there by staying solid and getting us four victories: To top it off with the fifth in that kind of high-energy atmosphere was an awesome feeling.”

The Maroons will play host to Olivet Nazarene on Friday at 5 p.m.