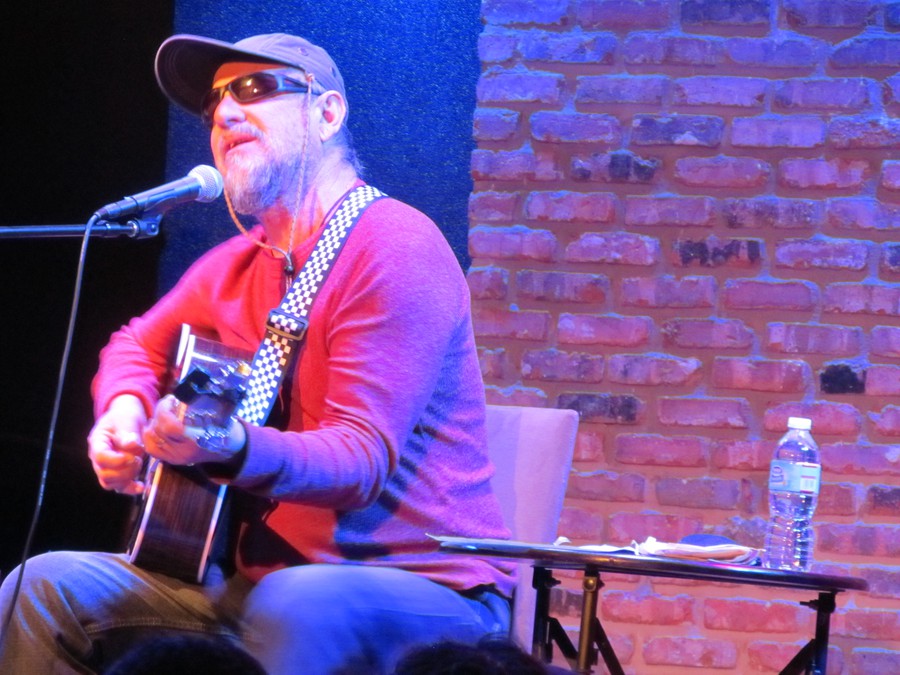 It’s no surprise that revered folk singer-songwriter Greg Brown gained his fame through his live performances and recordings, particularly from his appearances on A Prairie Home Companion, the weekly radio show aired by more than 600 public radio stations. It’s easy to smile while listening to the Midwesterner’s raspy yet playful voice and to the relatable anecdotes he tells between songs.

Brown, who has been a recording artist for around 40 years, performed with blues-rock guitarist and producer Bo Ramsey at City Winery on Saturday night. Brown played an acoustic guitar while Ramsey played electric, and they both wore hats and sunglasses during the entire show.

The open yet cozy seated venue and the glasses of wine in most guests’ hands facilitated an intimate performance. City Winery, which opened in August 2012, makes its wine on-site and announces special-edition bottles for sale at the beginning of each performance—Greg Brown’s was a Sauvignon Blanc.

Ramsey is one of many who love and respect Brown’s songwriting; his lyrics have been performed by a who’s who of singer-songwriters, including Mary Chapin Carpenter, Jack Johnson, and Ani DiFranco.

Brown sang about his beer belly, his daughter, the 2012 presidential election, and baseball—and I didn’t have to guess the meanings of his lyrics. Before most songs, he told the story behind the music.

“I wrote this song the same way most of my songwriting works,” Brown said before performing “Laughing River” from the 1992 album Dream Café. “I like life—I don’t think it needs any written commentary. But I think the muse picks people who aren’t particularly bright, [laughed] and when an idea starts bugging them so much…they need to write it down.”

He also performed a song written by his wife, country singer Iris DeMent.

Brown growled about the realities of aging and called life a “big old compost pile” in “Bones Bones,” one of the several songs he performed from his latest album Hymns to What is Left. But even singing with the persona of a grumpy old man, he made the audience laugh with the line, “I’ll never be tired of looking at you / I got a stiff old bone, baby what you wanna do?”

While I yearned to hear him perform more of his older music—but isn’t that the case at most concerts?—at least Brown wisely closed before the encore with “Canned Goods,” the nostalgic 1982 track about tasting summer in December; his “grandma put it all in jars.”

Brown gave as intimate a show as I have ever seen: I learned about his wife’s cooking, his Pentecostal preacher father, his support of Obama, and his views on genetically modified organisms (“GMO crap”).