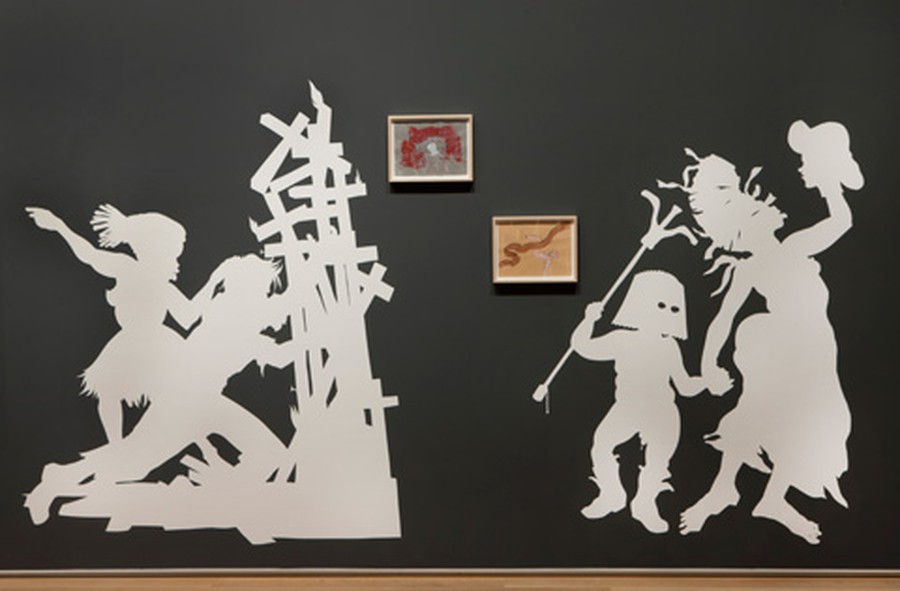 Known for her dramatic, wall-mounted cut-paper silhouettes, Kara Walker’s exhibitions cultivate a world of their own: Rife with hyperbolized antebellum stereotypes, each installation addresses themes of violence, race, sexuality, and power relations. Her detailed and dynamic creations behave with an almost theatrical autonomy. Leaping and tugging at one another from wall to wall, the figures channel a bodily energy that likewise pulls the viewer through the gallery space. Rise Up, Ye Mighty Race!, Walker’s newest exhibit at the Art Institute, is emblematic of her stylistic and symbolic legacy, but offers up a few unique features of its own.

Walker’s constructed world was commissioned by and designed specifically for the Art Institute: Each piece of the installation is conscious of the space that it occupies. The effects of this conceptual cohesion are obvious when viewing the exhibit from afar; it blends seamlessly with other works in the gallery, sharing wall space with Morris Louis, Kenneth Noland, and others. Due to its subtle integration into the contemporary art space on the third floor of the Modern Wing, Walker’s exhibit is an inevitable encounter—one that, for many viewers, occurs before they even know it.

Opposite the walk-through entrance, a bluish backdrop descends from the ceiling to frame the white text announcing Walker’s installation. A gap in the false wall gives the viewer a peak into the interior space, also washed in a dark blue and filled with dozens of Walker’s creations. In addition to her iconic flat caricatures, several large-scale graphite drawings come into view, each giving a depth and material density, which those who are already familiar with her silhouettes will perhaps find surprising. There are also 40 small-framed mixed media drawings in the exhibition, many of which are rendered in colored ink or paint and feature written text, two elements uncharacteristic of Walker’s more well known work.

Walker describes this mélange of images as a “kind of paranoid panorama wall work,” and it is perhaps their lack of material uniformity that breaks down the typically linear narrative of her installations into something instantly more personal, albeit disjointed. Rather than a play or story with a unified plot, the exhibition behaves almost like a diary, with each piece acting as a unique and autonomous iteration of Walker’s long, ongoing dialogue with race. There is less leaping from wall to wall; the silhouettes included in the exhibit seem, in some senses, more restrained than in some of her past shows, and certainly more self-contained. Many of the silhouettes are segmented into groups of two, their bodies facing one another, sometimes physically interacting. Each group performs its own distinct narrative, creating a series of simultaneously occurring scenes, as opposed to an overarching story. The sheer amount of content in a relatively small, singular room is another factor in the development of small clusters of interlocking narratives.

The bands of silhouetted figures that do take an interest in the world outside of their own each physically gesture towards any of the five large-scale graphite drawings in the gallery space. These five scenes, stationed at regular intervals throughout the room, reveal explosive and populated scenes of violence in the Civil War. Slaves are shown victimized and massacred in each depiction, and, although the settings do vary widely—from smoke-riddled battlefield to what appears to be a river scene, washed in a thick and disorienting grey—the graphic and dramatic nature of the drawings remains consistent. Bodies are smashed, severed, inverted in puddles of blood; the artist has worked several layers of different shades of graphite onto each drawing, occasionally re-entering the work with an eraser to obscure or add highlights to certain forms. The dynamism of her technique, in addition to the sheer size of each drawing and the shocking content portrayed, creates five overwhelming and affecting illustrations of the grotesque and violent history of slavery.

While the small-framed drawings are scattered throughout the exhibition at large, the final wall of the gallery space exhibiting Walker’s work features these pieces exclusively. Arranged in a way that resembles how one might hang family portraits in a living room or along a staircase, these small-scale images unpack large concepts. Some illustrations are portraits resembling the work of Egon Schiele; others depict gangs with the slogan “integrated rape gangs”; still others draw from and parody symbols of American culture and notions of patriotism. Almost all of them are corporeal, echoing Walker’s fundamental interest in the body as a medium for storytelling, and many include gorgeous applications of a rich variety of color and detail work.

Typically tempered by the flash and force of the aesthetic uniformity and exaggeration of her silhouettes, the artist’s personal struggle with the politics of race, gender, and power is here given a generous space to unfold. Rise Up Ye Mighty Race! presents many of the themes tackled by Walker’s typical monochromatic silhouettes in a new range of color, form, and scale. Walker’s world comes to life under the gaze of the viewer, its characters’ unique narratives speaking volumes to the horrors of slavery and the dynamics of power, gender, and race relations.

Rise Up, Ye Mighty Race! will be at the Art Institute of Chicago through August 11.