For you are crust, and to crust you shall return 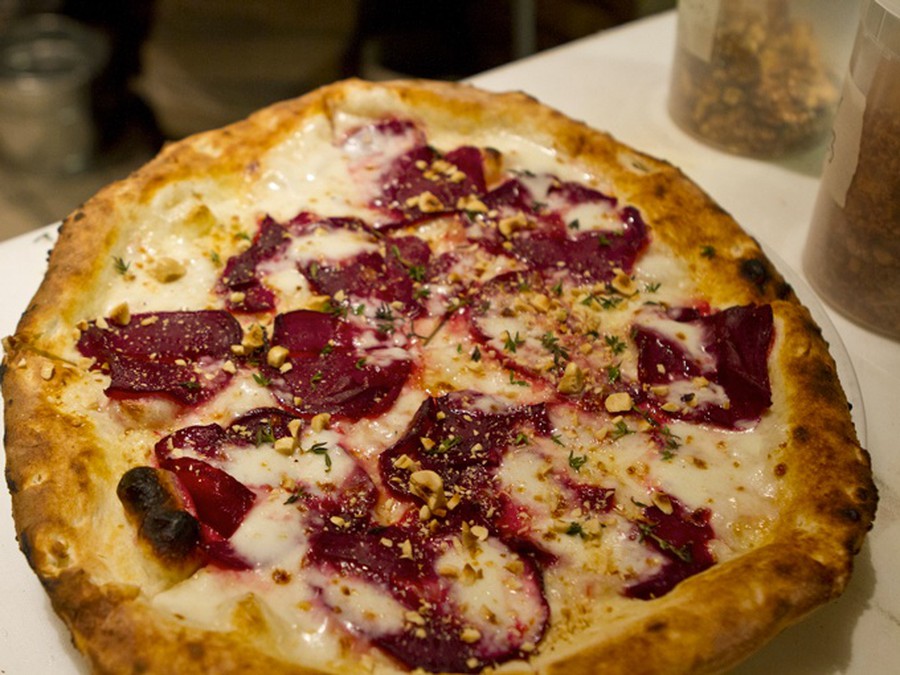 Oh thin-crust pizza, how do I describe thee? Let me count the ways. A war of words, a skirmish of similes, and a massacre of metaphors have been waged in countless attempts at capturing the nature of a thin-crust pie. Perhaps you side with the storied legacy of “cracker crisp” or “wafer thin,” the traditional fallback of the beleaguered food writer. Then again, the more noble and refined “gossamer” and “ethereal” might strike your fancy—watch out, we got a badass over here.

And yet for some of the more scientifically-minded out there, microns and calipers best make their point, while a rare few would see physics textbooks put to better use as firewood, declaring a slice of pizza as “only having one side.” But I feel that my contribution to the playing field, in characterizing the pizza of newly opened Reno, emerges as the true victor: For Reno produces a crust so thin that it simply ceases to exist.

The only other wood-burning operation that comes to mind is the small-plate Mecca that is Avec, which produces some quality quasi-pizzas/flatbreads of its own. Though evaluating Reno and Avec side-by-side is like comparing apples to Rolex-wearing, V-necked, investment-banker oranges. Suffice it to say that Reno puts the oven to good use in all sectors of the menu, including another carb rarely encountered in the Chicago jungle—the elusive bagelis ediblis. Though I did not have the opportunity to sample this exclusively morning and afternoon delight, I have it on good authority that they are some of the best bagels in the city. I’m also glad to see Reno offering some unorthodox (and un-kosher) spins on bagel sandwiches, including the Hammer (your standard egg, sausage, and cheese enhanced with roasted poblanos) and Hook, which, with its togarashi lox and artichoke cream cheese, is a strong contender for taking first place among the breakfasts of champions.

However, like all good relationships, the foundation of any self-respecting pizzeria is built firmly on crust. Fortunately, Reno yet again delivers on that front. The wood oven yields a somewhat “bready” crust that may err slightly on the side of artisanal French boulangerie, but who among us carboholics is really complaining? Rest easy knowing these are the kind of pizza bones you’d rather bury your face in than bury in the backyard. Though I wish I could say the same about the pizza as a whole.

In terms of the total product, Reno’s pizzas are a hybrid of the classic, evenly distributed cheese pies of New York and the high-heat capacities of a nicely charred Pizza Napoletana: most assuredly not the Midwestern varietal in any sense (no crustless center pieces for you, buddy). And as you make your way towards the center of the pie, the crust approaches almost infinitesimal thinness, to the point where your toppings are just suspended in mid-air. There is some kind of unearthly, dark voodoo magic at work keeping this pie structurally sound. But this also means that the toppings have to excel in practice as much as they intrigue on paper, as there is simply no crust to obscure their flaws. For instance, in the case of the Reno pie, a standard take on the margherita, the result is an all-around balanced pizza. The mozzarella is actually spread about, rather than confined to lonely cheese islands, and there’s none of that “hand-torn” basil nonsense that makes you feel like a barnyard animal. Spectacular? Absolutely not—but it’s a decent crowd-pleaser. The same is true of the Paulina, which promises such rarefied delicacies as jalapeno pesto and Paulina pepperoni, yet manages to be a pretty uninspired pie for a pizza purporting to uphold the pedigree of a Chicago meat legend. The incredibly mild jalapeno pesto was distributed with about the same level of planning and consideration as a sneeze, while the Paulina moniker didn’t elevate this pepperoni above a standard one.

So if the “standard” options at Reno are as standard as they come, do its more creative offerings befall the same mediocre fate? Luckily, this is not the case; in fact, the oven at Reno seems to be fueled by unconventionality. The Hog pizza—boasting carnitas, salsa verde, roasted poblanos, and cotija cheese—comes perilously close to making a mockery of Mexican flavors, yet the kitchen shows some restraint in rationing out these components, really tying the pie together. Largely satisfied, I did find myself wishing for much more of the pork belly carnitas, especially in light of the cojita and mozzarella cheeses—the poor little piggy was just barely making its oink heard.

However, the true pie de résistance was none other than the Kenny Bell. A requisite Google search for the name yields a dude with a giant fro; while this inside joke may have been lost on me, the pizza had no trouble finding its way on the short trip from the table to my mouth. Topped with sweet potato, brussels sprouts, cippolinis, and guanciale (that is, face bacon), the pizza excels for the simple reason that it combines all the ingredients best suited for oven-roasting…and then embeds them in a layer of cheese.

I would be painfully remiss to overlook the non-pizza options coming out of the Reno oven, just as Reno would be remiss to restrict itself to exclusively filling it up with dough. Consider the salads and sides, even desserts: The menu may not give them even billing with the pizza, but I’d give some of these beauties my undivided attention. Roasted broccoli ain’t so simple when graced with a date and bacon vinaigrette, and old-school parmesan crisps covered the full flavor spectrum of salty, sweet, and savory. It may not be a new idea, but the taste never gets old. Then again, the normally insipid spinach salad is innovatively festooned with a shower of what looks like hay…but tastes like “Hey, hey, hey!” Sorry about that. But seriously, these fried leeks remind me of potato chips with only the best of intentions. Hell, even the apple salad (with celery, kohlrabi, and Manchego) is a reimagined take on the classic apple and cheese pairing consummated within the deepest depths of fondue pots, just without the added heft of one bazillion calories.

And while I don’t fancy myself a betting man, it only seemed appropriate to gamble at Reno, with desserts as my primary game of choice and chance. My first foray, the kitchen sink cookie ice cream sandwich, was kind of a bust: The cookies were a kind of arm sweep of tabletop ingredients into a fairly standard oatmeal-esque dough, and they detracted from the banana-cardamom ice filling sandwiched between them. But on my second pull at the one-armed bandit, I hit the jackpot big time with an apple crumble, fresh out of the oven, with rivets of cinnamon ice cream streaming like lava flows upon some monstrous volcano. I’ve dined with groups on multiple occasions, and never have I seen something so utterly and savagely destroyed.

It turns out that, in the end, the most apt analogy for what Reno represents as a restaurant has been hiding under your nose the whole time. There is a bottle of homemade “honey” hot sauce, in addition to “hot” hot sauce, that adorns every table in the house. It sounds pretty damn good, and so you slowly pour out the viscous mix on top one of slice, and then the next, and then slather it on your leftover crusts. It’s good…it’s addictive…but why? Well, I hate to break it to you, but it’s clearly honey. Straight up honey, with no trace of bite or kick. And everyone loves honey, just like everyone generally likes pizza. It’s arguably one of the most indiscriminate food decisions the average person makes. Reno makes good, but not exceptional, pizza—which will be more than enough to swarm the place with customers. But even if you can catch more flies with honey than vinegar, that doesn’t mean you should. Sometimes you need a dash of vinegar to keep things fresh.