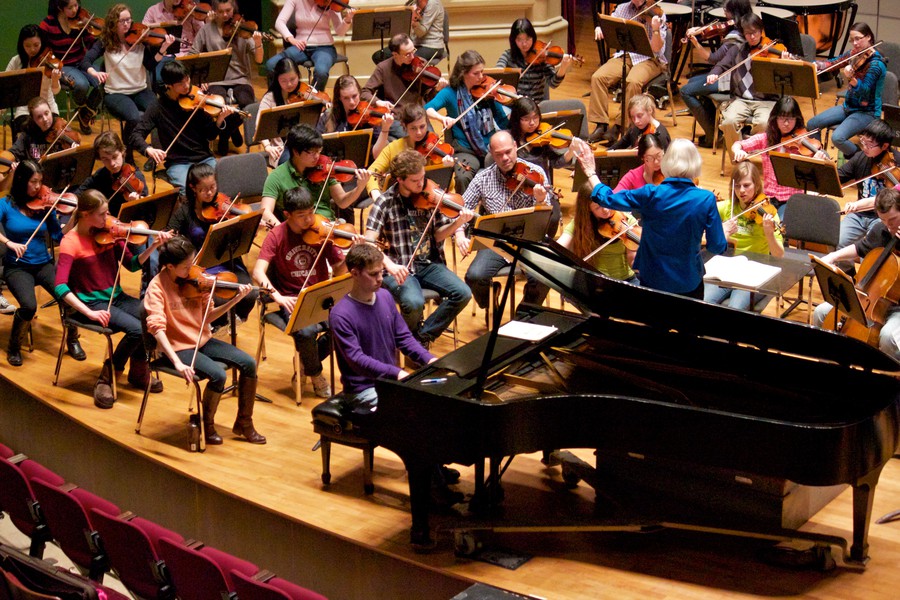 Tomorrow, the University of Chicago Symphony Orchestra will mount the single performance of its concert featuring Richard Strauss, Gustav Mahler, and Johannes Brahms—three of the biggest names of late 19th-century music. Barbara Schubert, the Director of Performance Programs in the Department of Music, leads the 100-plus-piece orchestra and, in Brahms’s First Piano Concerto, accompanies Nathan Harris, A.B. ’14.

The Brahms concerto, Schubert says, is “a masterpiece by any standard, but it was also written very early in his life, in his 20s, originally designed as a symphony, but he later changed the melodic material to forge a piano concerto.” Because Harris won a concerto competition last year, Schubert designed the rest of the Austro-German program around great works likewise composed early in composers’ lives.

Don Juan, Richard Strauss’s 1888 tone poem, runs 16 minutes and is a notoriously difficult work—chosen partly because this year, the orchestra has an exceptionally good string section that clearly thrives on the challenge Strauss presents. Replete with all the swells of feeling that you expect from Romantic (particularly German Romantic) music, it has frequent changes in dynamics and mood, but Schubert is sensitive to the variegated architecture of the exciting piece, having conducted it a number of times before. “You always,” Schubert says, “find yourself discovering something new” in this rich Strauss score. Blumine is the title of the rejected second movement of Gustav Mahler’s First Symphony, itself nicknamed Titan. A serene, eight-minute andante, the work is not nearly as formidable as the Strauss, though at least as lush. It functions as a gorgeous respite between the at times frenetic Strauss and the great Brahms work that comes following the intermission.

Johannes Brahms wrote two concerti for the piano—the first in 1858, the second in 1878–81. They are together the two longest and among the most demanding such works, both frequently taking more than 50 minutes to play. A mighty work of music written in a stern D minor (like Beethoven’s own Ninth Symphony), it has attracted the no less mighty talents of Vladimir Horowitz (1935), Wilhelm Backhaus (1932), Rudolf Serkin (1959), Emil Gilels (1972), and—quite controversially and possibly unwisely—Glenn Gould, among dozens of others. Harris, who studies under Svetlana Belsky, the music department’s coordinator of Piano Studies and herself a student of Leon Fleisher, has taken on an extraordinary challenge in electing to perform this colossus among concerti so early in his career, but Schubert commends the depth and maturity of his interpretation. Schubert describes the function of a conductor with a soloist as being a middleman, telling the orchestra what to do moments before they do it, but also reacting to the soloist, in practice thus having to anticipate the needs of the soloist. However, having a soloist who is “technically solid and extremely musical, as Nathan is, makes the process of following much easier.”

The Symphony has been rehearsing only since February 2, and Schubert says the greatest joy of conducting UChicago students—non-conservatory students—is that they perform because they love it, that they put heart and soul into the effort for the pleasure of making music without any professional ambition. Furthermore, she finds it a distinct pleasure to work with students who have not necessarily played works like Don Juan before, and who therefore do not churn out “just another Don Juan.”