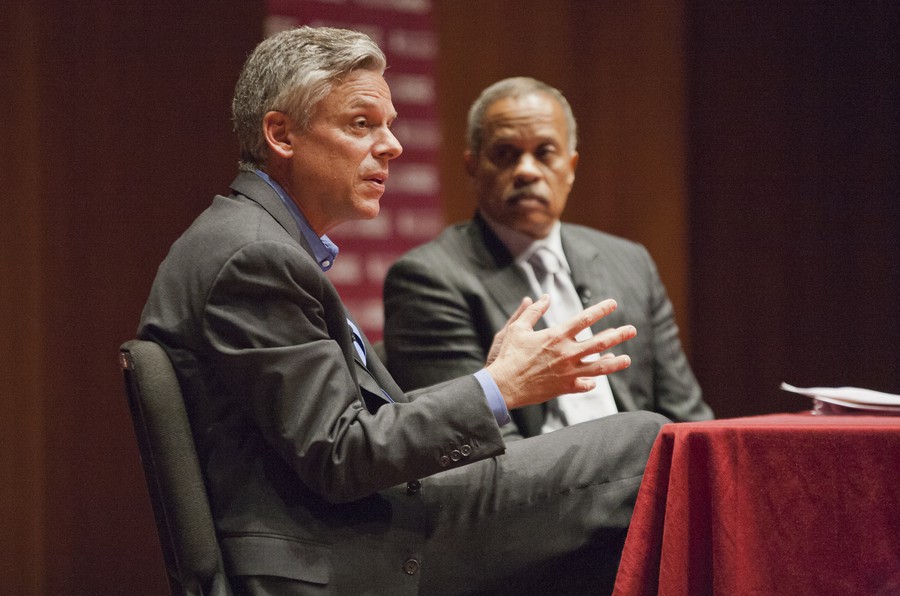 “For those of you who have never run for president before—it’s daunting,” Huntsman said, explaining how ineffectual he finds the primary presidential debate format. “They always used to put me on the end. They organize it according to the polls—and I wasn’t doing too well. So the moderator would ask a question about foreign policy and by the time they got to me we had declared war—about four times.”

When Williams probed Huntsman about why this year he skipped his first Republican National Convention since the 1980s, Huntsman said he had another commitment, a guest-spot on The Colbert Report.

Huntsman did not shy away from criticism of the GOP.

“The clock is running. The Republican Party needs to present a viable optimistic vision for this country before 2016. We need to do the math,” he said. “You have to look at the numbers. We can’t lose key demographics and expect to win.”

Huntsman’s emphasis on the immediate need for serious change in the GOP led one student to ask whether Huntsman felt it was time for a third party to step forward. Huntsman said that though “barriers block the creation of third parties, a third party movement is inevitable.”

But he underlined that he is not trying to create a third party. “I’m a Republican. I am not an independent. I am a Republican—until there is not a party,” a possibility he does not consider improbable.