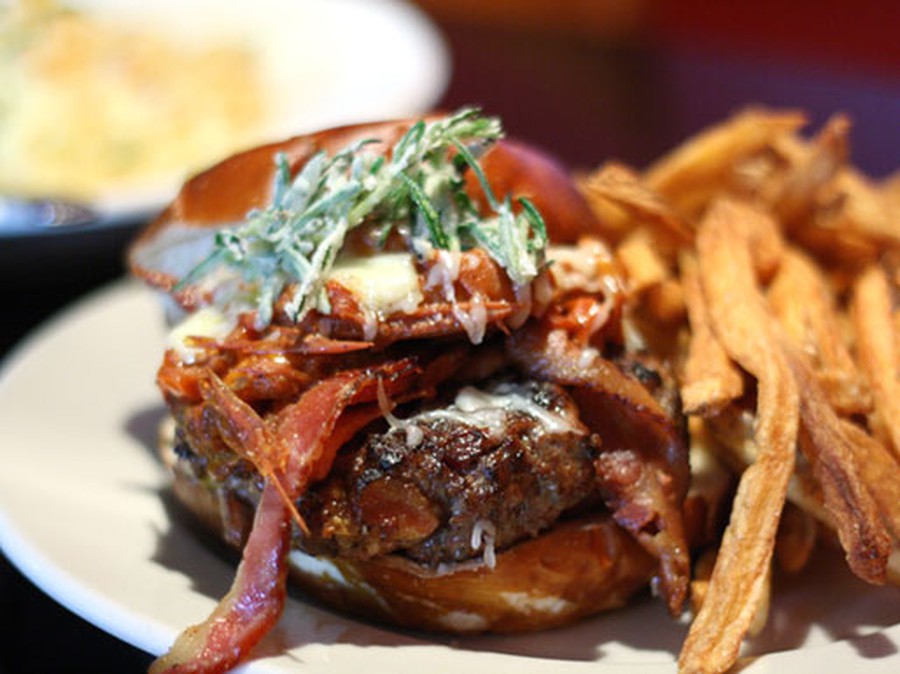 Ladies and gentlemen, boys and girls, children of all ages…I am pleased to announce that the reports of the death of Kuma’s are exaggerated. OK, maybe not death, but possible demise. What began as a series of surrealist rumors regarding a possible suburban outcropping of the (in)famous burger bar quickly became a reality in the form of a second location, Kuma’s Too, in the utopian Brunchlandia that is Lakeview.

Despite the scenery change, in this new space the song remains the same, as does the heavy-metal theme, booze collection, and bypass-inducing menu. In that case, what’s the use writing about it? After all, telling someone to go to Kuma’s is the culinary equivalent of instructing a Chicago tourist to take a selfie at the Bean. Then again, a photo doesn’t take upwards of two hours of waiting...unless you are having a hard time getting your duck face just right. So consider this a public service announcement: You can finally eat at Kuma’s when you actually want to eat at Kuma’s.

The address is an imposing 666 West Diversey Parkway, yet the number of giddy families in attendance make the vibe decidedly more 123 Sesame Street. The interior is airy; music is an 11 on a scale of 100, servers bring steak knives on separate plates, and you feel almost too comfortable ordering a side salad in lieu of fries. While certain elements of the Kuma’s mystique have been lost in translation—castration may be a more apt term—another telltale sign of the classic experience is absent as well: the line out the door, down the street, and halfway to the Pacific Ocean. Many a party larger than two have been denied beefy pleasure at the hands of notorious wait times, but at Kuma’s Too, you can be seated in less time than it took A Dance of Dragons to come out. On a Friday evening, a 40-minute wait time transformed into a five-minute one. Either there was an outbreak of dengue fever in Lakeview, or there’s something to be said for this new user-friendly version of Kuma’s.

Before you know it, folks are gonna start waxing nostalgic about the good ol’ days, when a burger could only truly be appreciated after waiting for hours…in a blizzard…uphill…both ways. Yeah, kids have it too easy these days. Or over-easy, as in the case of the Famous Kuma Burger and its irresistibly simple egg and bacon ‘n’ cheddar accessories. How did the burgers fare the journey east? Same as it ever was. The foundation of any great burger is even greater beef (and 10 ounces is the greatest), and Kuma’s dealer knows how to treat cattle right. I won’t pretend to have intimate knowledge of all of the kitchen’s burger offerings, so my advice is to go with your gut and let those caveman instincts kick in.

Perhaps the Led Zeppelin fits the mood, a farm-stand petting zoo of beef topped with pulled pork and bacon that, while sometimes a failure, is generally a harmonious success that will fuel you on that stairway to heaven (if it doesn’t take you there immediately post-consumption). Maybe you’re feeling fancy, and the exotic Lair of the Minotaur beckons with caramelized onions, pancetta, bourbon-soaked pears, and brie. The caramelized onions mutiny against their more rarified counterparts, and hiding a cheese as pungent as brie is on par with David Copperfield making the Statue of Liberty disappear—it is impressive, but somewhat strange, to be paying for the privilege of not tasting an ingredient. Or opt for the Atkins-friendly Slayer burger. Or is it Fatkins? That would probably be an appropriate choice for a diet based on delusion, wherein substituting a bun for more fries, cheese, sausage, peppers, and chili is deemed wise decision making.

Lest this devolve into me listing toppings—chorizo, smoked gouda, red wine BBQ sauce, bacon jam, deep-fried chiles—let’s just say that while you save time at Kuma’s Too by not waiting in line, an endangered species might go extinct by the time you make a burger decision. Consider this follow-up PSA: Order the mac and cheese to keep those neurons pulsing. The entire right side of the menu is dominated by burgers, and a steady stream of meat marches out of the kitchen, so ordering the comparatively “simple” mac and cheese seems like a damn waste. But, presto change-o, guilt-be-gone! Order a nice big bowl. It is the perfect blend of high and low cuisine: a cheddar-based béchamel that evenly coats each and every little elbow noodle, with generous heapings of whichever toppings you choose, from prosciutto to peppers to peas.

Will some people call Kuma’s Too a form of selling out? Sure—especially since it’s a conveniently gift-wrapped cliché for any rock-themed bar. But I wouldn’t go quite that far. It’s more akin to releasing a greatest-hits album or touring in Japan: The integrity is basically intact, but income seems to be the primary motivator. Kuma’s will always have an amazing burger. And that’s a good thing, right? A sign of expert quality control? Yes. But the question you should really be asking is, why? Or rather, why bother with turning uniqueness into ubiquity? Without the allure of the badass atmosphere, and the sadomasochistic triumph that comes after hours of waiting...suddenly it’s not special. Any flaws that come to light are not as easy to overlook. I’ll be back, but the certainty that that statement affords also makes me want to keep my distance. While Kuma’s Corner is lightning in a bottle, Kuma’s Too is thunder in a mason jar.

Kuma’s Too is located at 666 West Diversey Pkwy, with an average burger price of $13.