U of C Press finds poems that stick 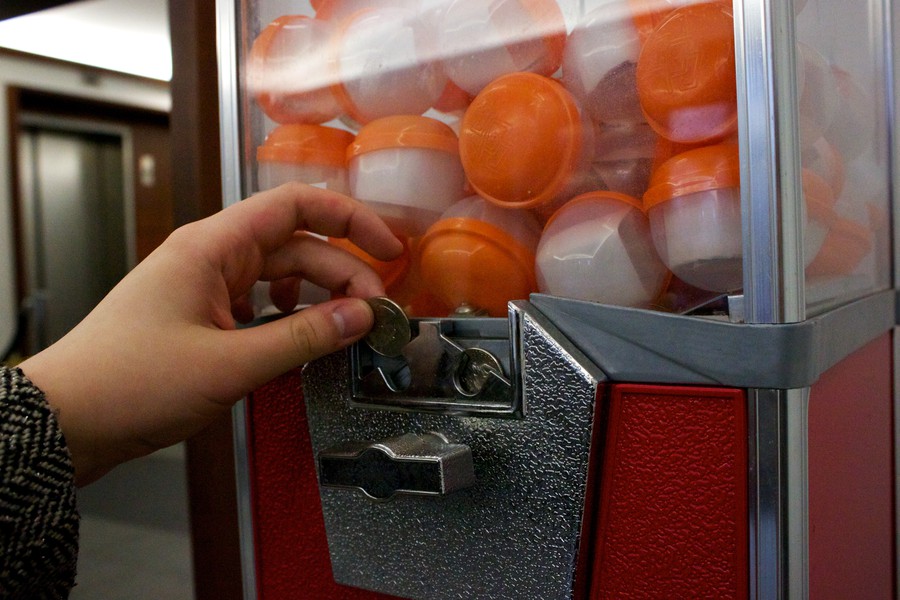 Nestled on the Midway across from the International House, the University of Chicago Press building is foreign to many students. Although the main lobby of the Press building is minimalistic and typically bare, a recently added feature will enliven the space for a number of weeks to come. A gumball machine flanked by signs reading “Celebrate National Poetry Month Chicago-style—Deep-dish poetry from Chicagoans” sits directly beyond the building’s main entryway. Instead of a gumball, two quarters and a turn of the machine’s crank yield a capsule with an original poem stuffed inside. I could not help but feel nostalgic for the gumball machines of my childhood as my capsule clinked its way through the insides of the machine before finally being released with a satisfying thunk.

Since 1996, the Academy of American Poets has designated April as National Poetry Month. “Poem in Your Pocket Day,” April 18, has always been a highlight of National Poetry Month for Yvonne Zipter. A manuscript editor at the University of Chicago Press, Zipter is responsible for the curious machine. “I’ll print out copies of poems I like and hand them out to my friends—this year I figured I’d try to do something on a larger scale.”

Zipter drew inspiration from Chicago nonprofit Arts Alive 45, which had distributed similar machines to stimulate youth interest in poetry. Grade school students at different schools were encouraged to create poetry and submit their work, and were then provided with 25 cents with which to receive another student’s creation by way of the dispenser. Working with the Press Employee Relations and Knowledge Sharing Committee, Zipter secured a spare machine from Arts Alive 45 and began her own collection of poems to better celebrate her favorite literary holiday.

The machine contains compositions penned by students as well as employees of the Press. “The students have been particularly enthusiastic,” Yvonne noted. Each 50-cent donation raised by the machine will benefit Working in the Schools (WITS), a Chicago-based organization that promotes literacy in public schools by way of volunteer-based mentorship programs. Specifically, the funds will go directly toward purchasing books for WITS program students enrolled at Carnegie Elementary School on 61st Street.

Although there are other poetry dispensing gumball machines located in both Harper and Cobb Cafés, Zipter was not aware of their existence prior to her own project. These previously established poem dispensers were installed as an Uncommon Fund project from 2012 entitled “Poems to Chew On.” Despite similarities in presentation and delivery, these iterations contain the work of established poets rather than those of the local and fledgling variety, and proceeds do not contribute to WITS.

While Zipter related that the University Press had no further plans to celebrate National Poetry Month specifically, the Press’s recent involvement with poetry has been significant. This past fall, the University Press published the National Book Award–winning Bewilderment, by David Ferry. The same month, the Press also collaborated with Poetry to release the book The Open Door: One Hundred Poems, One Hundred Years of Poetry Magazine.