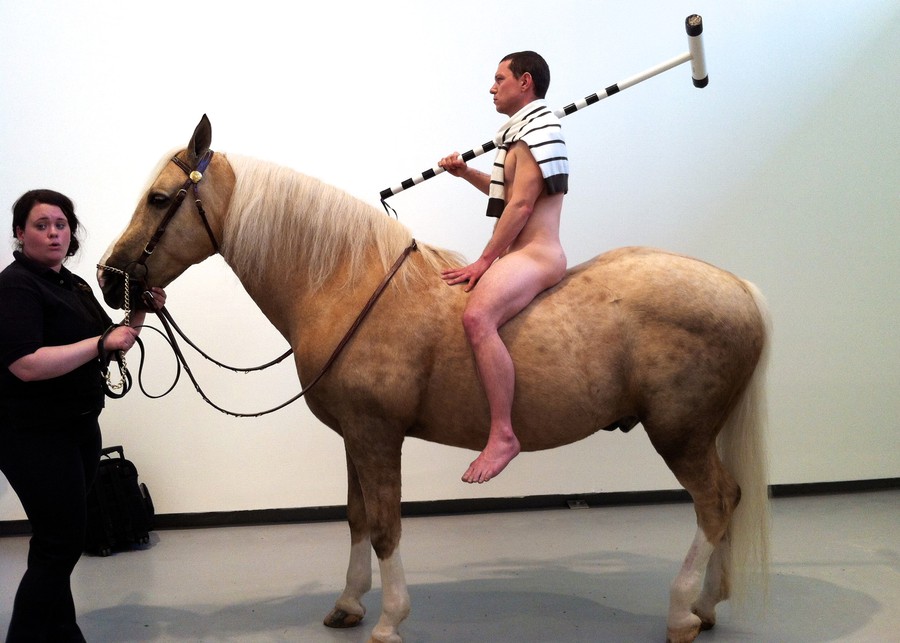 It’s long been argued that dog is man’s best friend. But if you talked to Chicago artist Jeremiah Hulsebos-Spofford, he would probably make a very compelling case for the horse. His new exhibition, Hall of Khan, which opened on Sunday at the Hyde Park Art Center (HPAC), explores humans’ long relationship with horses, particularly in regard to military history.

The show—the product of Hulsebos-Spofford’s yearlong residency at HPAC—includes an eclectic mix of media forms, including photography, collage, sculpture, drawing, and installation. But the piece in the gallery that drew the most attention at Sunday’s opening reception was a nude man sitting bareback atop a live horse for 30 minutes. For the first half hour of the show, two horses from Palos Hills Riding Stables were available for petting, feeding, and admiring, but half an hour in, the show transitioned into the spectacle of one horse and a nude male model accompanied only by a polo mallet and a Ralph Lauren Polo sweater. Prior to the performance, the announcer said, “It’s a durational piece. You can come and go as you please.” But as expected, a crowd of upwards of a hundred people gathered in the corner of the gallery for the full half-hour tentatively snapping photos, sipping wine and whispering to each other in awe, as nude model and horse stood almost perfectly still, except for the occasional need of the horse to relieve himself on the gallery floor.

This piece, along with a photo collage of hundreds of horse monuments from around the world, and a sculpture made of wood, sneakers, and a Hanes T-shirt, entitled “White Man Can’t Jump,” makes reference to the horse as a symbol of militarism and masculinity. Although avant-garde artists like Picasso and Matisse made the switch from representational painting to expressionism a long time ago, the traditional war-horse monument, Hulsebos-Spofford felt, never made it into the arena of modern art. It seems that this is because horses have been obsolete in the context of war for hundreds of years.

In Hall of Khan—a reference to the great Mongolian steppe horseman Genghis Khan—Hulsebos-Spofford decided to take a stab at a contemporary warhorse monument. His abstract recreations of these statues, which are often just a fragmentary part of the monument like a saddle, are made of a smattering of materials including but not limited to foam, furniture, polystyrene, epoxy putty, plaster, wax, acrylic, boiled sugar, 90 percent dark chocolate, and dried pineapples. While Hulsebos-Spofford, a Vermont native, remains close to his fascination with all things equestrian throughout the show, the mix of media forms makes it feel at times disjointed and lacking in a specific aesthetic effect or artistic methodology. A massive wooden skeletal structure entitled “Hall,” which towers high above the other pieces, is a scaled-down recreation of the Crystal Palace in London’s Hyde Park, and a feat of construction, but has a hard time fitting in with the size and color scheme of the other pieces in the room.

What is most commendable about Hall of Khan is perhaps the way it brings the horse, a rarity in urban Chicago, to young children, and even adults, who have never touched or even seen live horses. In addition to the exhibition, HPAC will hold horse drawing classes as well as a high noon ride with Chicago’s Broken Arrow Horseback Riding Club. Whether or not you share Hulsebos-Spofford’s fascination with horses, Hall of Khan takes a daring and highly radical approach to history and art, and makes for an entertaining place to spend your Saturday afternoon.

Hall of Khan will be showing at the Hyde Park Art Center through July 28.