Where fun comes to eat fondue and dance in Skechers

In its second year, the Pierce Tower Awkward Ball finds laughter and questionable dance moves. Due to the planned demolition of Pierce, the ball’s future is uncertain. 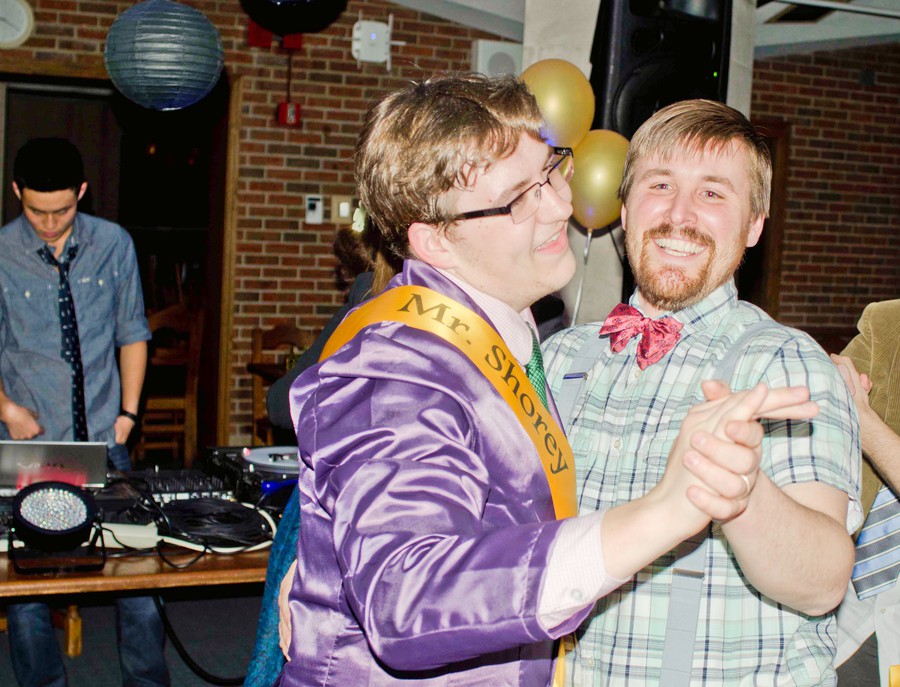 Saturday night, I expected myself to be arguing with my friends about whether to go to the Snail or Noodles for dinner. If not, I was sure I would spend half the night rolling my eyes at everyone going to frat parties, and, of course, end up joining them eventually. However, instead, I found myself walking into a soiree which evoked mixed memories of seventh grade dances and my grandma’s retirement home Christmas party. Tubs of soda cans, wall-to-wall carpeting, balloons, and rows of chairs facing the dance floor also conjured flashbacks of preteen birthday parties. I had entered the Pierce Awkward Ball.

The event is one of the dorm’s well-loved traditions and embraces the odd characters that occupy the building. Pierce Tower Council President Mark Maskeri described the Awkward Ball as “a reason for students to get together and have a good time,” and commented, “We’re all awkward—and we know it—so why not celebrate it?”

Interestingly enough, the ball didn’t feel like a gathering or celebration, but more like it was intended to be a petri dish or incubator for the tender cultivation of social ineptitude. It was like some mad scientist had taken over Pierce Dining Hall and combined the fluorescent lighting and garish music to create an absurd social experiment.

In the early stages of the evening, I enjoyed Potbelly sandwiches and a chocolate fountain as Pierce inhabitants arrived. The guests entered the dining hall like a parade honoring the sartorial diversity we enjoy (and, sometimes, cringe at) on campus. Guys who represented the classic jeans, Skechers, and hoodie look joined pajama-wearers. Soon, the residents who respected the title of “ball” arrived, all dressed to impress in tuxedos and evening gowns. I even watched one girl impressively edge down a small flight of stairs in seven inch heels. The clashing styles beautifully complemented one another as revelers filed in past the fourth meal cash register and soda fountain, where a makeshift red carpet had been rolled out for this classy affair.

Luckily, I was not merely a freeloading gatecrasher; I had the pleasure of bringing my own lack of social skills to the table and contributing to the uncomfortable atmosphere. Not knowing anyone in Pierce, I shuffled around, quietly dripping chocolate fondue on myself. I noticed that several of the attendees had donned sashes, as if they were beauty queens. I gathered that the participating houses all elect a Mr. and Mrs. House to represent them, just to make sure we haven’t forgotten our high school years. Interestingly, the Tower Council even arranges a dating service to match up random residents, in case the dance was in danger of being too normative.

After butting into one too many conversations, hearing enough Macklemore to last a lifetime, and dodging the skateboard of one of the Resident Master’s children, my date bluntly told me it was time to go. She seemed traumatized; she cursed me for coercing her into attending the affair.

Yet later on in the night, I began to reflect on the Ball and regarded it with renewed respect. Pierce had created something great, something impressive. Normally balls, dances, formals, hoedowns, and whatnot simply ignore the social anxiety that plagues us. The Awkward Ball takes a step back and allows us to talk, relax, and joke about all the natural discomfort that arises when enough people are in a room together.

Unfortunately, as we all know, Pierce’s time on campus is short, and because of this, the Awkward Ball’s fate is uncertain. The looming closure of Pierce and threat to this tradition echo the recurring cries of distress concerning our school culture and identity. Is UChicago losing its weirdness? Is our rising popularity a bad thing?

According to Pierce Tower Council members, many residents are enthusiastic about continuing the tradition, and hope to do so in the new location. It seems that even as the school changes, at least a small part of UChicago will remain a place where fun comes to die belly-up—awkwardly, that is.