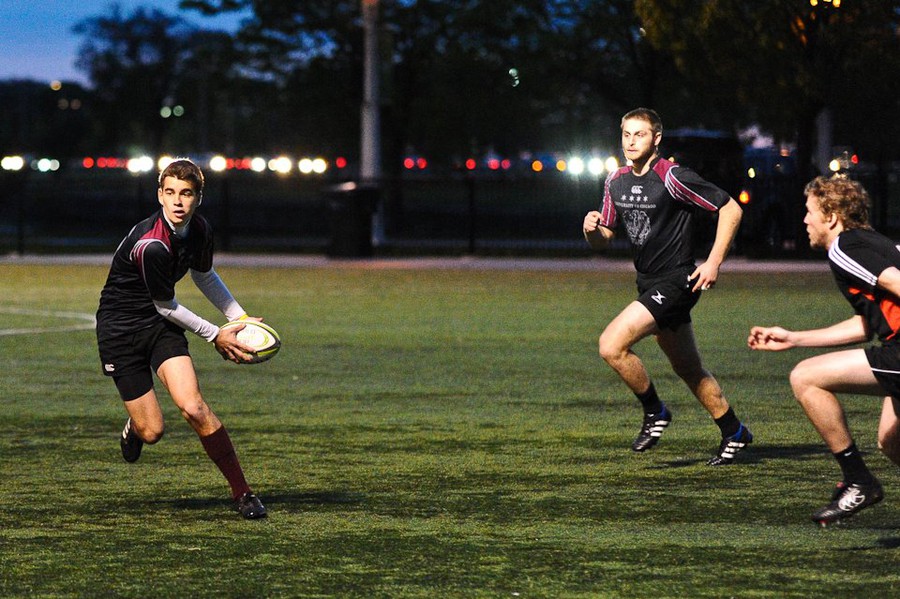 You may have seen them crashing into each other on the Midway—lines of men with their limbs locked in confrontation, pitching their sport’s distinctive leather spheroid here and there, back and forth, sprinting, juking, kicking, in the midst of a scrum.

I’m talking, of course, about University of Chicago Rugby, not football, but you’d be forgiven for mistaking them, clad in their bold, timeless long-sleeve polos, for some reincarnation of the original Monsters of the Midway.

For over 50 years, the University—graduates and undergraduates alike—has fielded one of the most competitive teams in the Chicago area. Tracing them back through old newspaper clippings, the Maroons can be found crushing the Chicago Lions (now playing in the men’s Midwest Division I) in 1964, competing in the Division I Final Four in the late 1970s, and clocking in winning records year after year throughout the 1990s. Even now, alumni from the 1960s and 1970s show up for the team’s annual Alumni Game in the spring.

After a decade-long spell in which the club was dominated by Booth students, 2007 saw the beginning of a transition towards undergraduate competition. The Men’s Rugby club contests the Chicago Area Rugby Football Union (CARFU)’s collegiate division in the fall, and unites with graduate students and alumni for an exhibition season in the spring against other universities and local teams, like the Chicago Riot and the South Side Irish.

“Professionally, the Chicago Lions are one of the best clubs in the country, and we actually have a few UChicago members who have been affiliated with them,” the team’s president, second-year Mack Skarzynski said. “Overall, the rugby scene is pretty vibrant and constantly expanding.”

The Maroons reached a new high last year, topping CARFU’s Division III table without a loss and outscoring their opponents 155–12 over four games. Now a part of the league’s Division II, the team can boast, rightfully so, that it’s the University’s only sports team competing above Division III. After spending last fall getting used to the new level of competition, to the tune of a 1–3–1 record, Skarzynski says that the club’s goal is to win CARFU’s Division II league this coming fall.

Like most of the club sports on campus, the men’s rugby squad has a mixture of lifelong players and converts to the game. “I’d been advised by several older friends who had dropped out of varsity wrestling and football at other schools that rugby was way more fun,” veteran third-year TJ Welch said, “so I went into O-Week planning on joining the team to see if it was for me, and I fell in love.”

Skarzynski, a hockey player since his youth, told a similar story. “I really wanted to continue with a physical team sport at UChicago,” he said. “By the time second week came around and our season was starting, I was already hooked.”

As the team adjusts to its league and to a surge of new blood—the 10 players who left the team after last year have been replaced with undergraduates—the rugby club finds itself amid something of a renaissance, as rugby transitions from its former niche into the public eye. Rugby was the fastest growing team sport in the U.S. in 2010, and America’s Olympic squad is a serious threat to win gold in Rio de Janeiro.

The Maroons, too, are finding themselves an object of increasing interest. Lab School students have come out to the club’s practices, with talk of starting a school team. In addition, there have been rumors of the squad going varsity, captain Tommy Walsh said, though he pleaded ignorance.

The stigma of rugby as a sport played by brawny foreigners couldn’t be further from the truth, and there is a strong element of tradition to the game. Rugby code dictates that teams leave their aggression on the field and, after post-game handshakes, share food, belt out classic rugby tunes, and, yes, party together. “It’s a great dynamic that needs to be experienced to be understood,” Walsh said. “It’s cool doing something original, and there is definitely a strong bond between people who share an interest in the game. I’ve also been able to meet people from all over the world.”

“Just last week we had a game with the Chicago Police Department,” Welch said. “Being able to just talk to police officers like normal people and hearing some of their stories was just unreal.”

The connections between team members, though, seem even stronger. “We usually refer to joining the rugby team as having joined a second fraternity,” Welch said.

Presently, the squad is in the midst of its exhibition season. Having played against Lincoln Park Rugby and Chicago Blue so far, the team takes a break this week for its Alumni Weekend. Afterward, it has fixtures against the Illiana Misfits and DePaul, before taking up the mantle of the University’s honor against Northwestern in May.