Memoryhouse literary magazine brings intimacy and honesty to Logan in an evening hosted by 2nd Story. 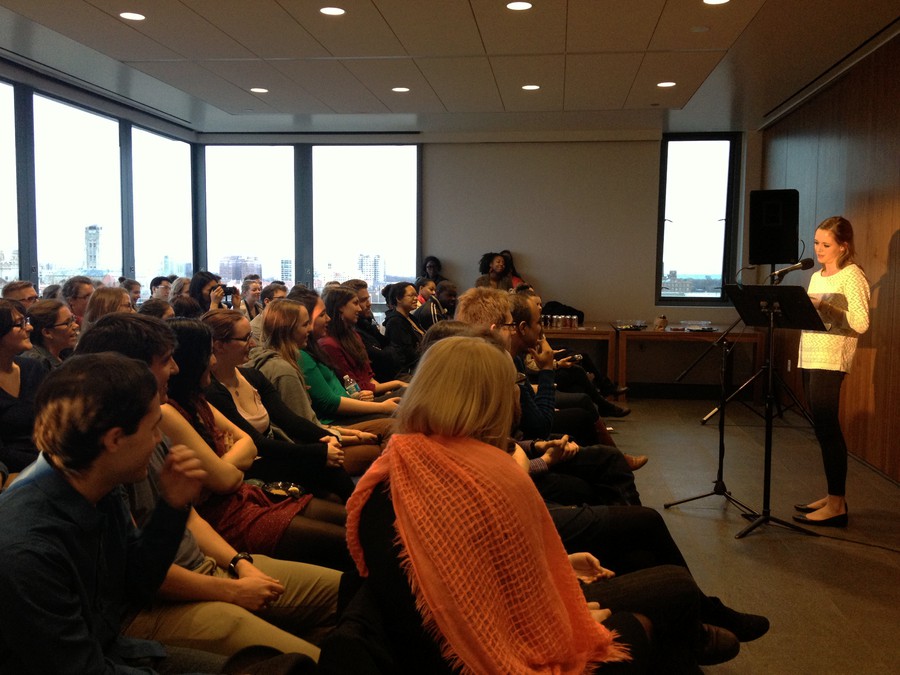 “I need to introduce you to three boys before you meet me,” third-year Lauren Kelly-Jones said into her microphone, looking steadily around room 802 in Logan at Memoryhouse literary magazine’s first event on Friday night. But instead of pointing to three men in the audience, she simply started telling a story, confessing a tale of three men in her life, including a five year old atheist and the not-so-perfect guy she met in her first year as a student here at the University of Chicago. Kelly-Jones's British accent and colorful personality animated her reflections on being young and in love with the wrong guy.

Lauren performed this piece as part of 2nd Story, a professional collective of storytellers that hosts storytelling events around the city. Friday night’s performance theme was “I Got Schooled: Stories from the Classroom of Life.” It featured three speakers, each with a very different experience and theatrical style. The first piece, performed by School of Social Administration student Margaret Marion, was about growing up in a foster home with a foster sister who never fully accepted her into the family. Marion told her story with sassy humor and pops of bright music that kept the audience laughing. She recounted a drama involving three pregnancy tests and reminisced on how she and her foster sister clawed each other’s hair in a catfight after prom.

The last story, performed by more seasoned members of the troupe Megan Stielstra, visiting lecturer on the Committee on Creative Writing, and Bobby Biedryzcki, dealt with depression, suicide, addiction, but ultimately an against-the-odds recovery. The performers used an expert theatrical touch as they told the same story from different perspectives, perfectly timing the sometimes completely conflicting recollections and feelings.

2nd Story seemed to be the ideal company to reach out to for Memoryhouse’s first event. Megan Stielstra is not only the literary director of 2nd Story, but also the faculty advisor for Memoryhouse, the University’s newest literary magazine. Memoryhouse focuses on narratives and poetry written in the first person. Its Facebook page is liberally covered with links to great examples of the memoir genre.

All of 2nd Story’s works, which are based on real-life events, are intended to be performance pieces. Stielstra describes 2nd Story performances as having “the intimacy of [her] own living room and the crazy, wine-warm secrets that have been told there.” Though these stories are no grand surrealist feats or psychological dramas, their appeal lies in how the everyday life of each performer has been transformed so gracefully into relatable performance material. Each becomes personal and engaging, so that listening feels almost as if you’ve dropped in on a group of entertaining and talented friends, telling stories to no one but each other.

Memoryhouse's first issue will be released at the Logan Cabaret on May 10 at 8:00 pm.