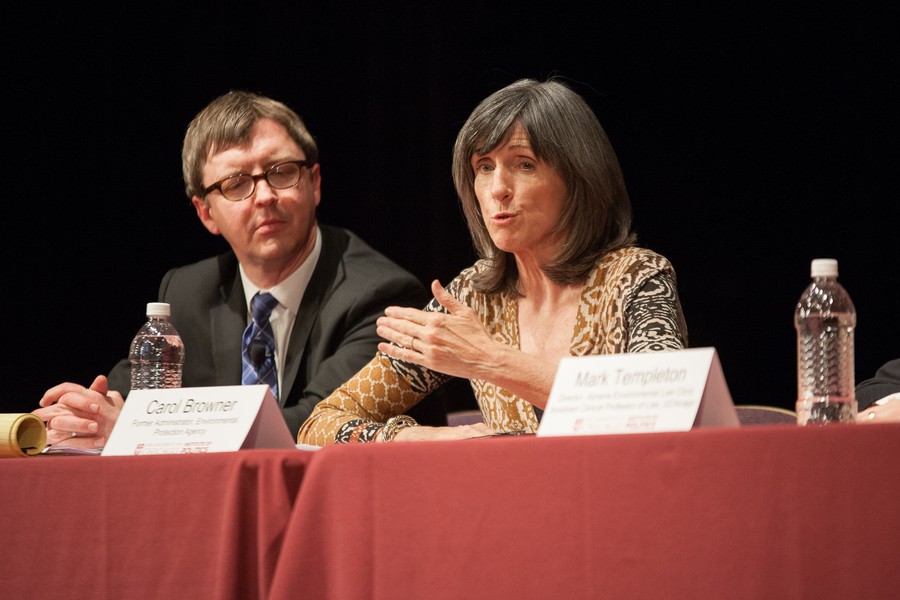 Former Climate Czar Carol Browner was handpicked by President Obama to serve as director of the White House Office of Energy and Climate Change Policy and served as the administrator of the Environmental Protection Agency (EPA) for eight years, longer than anyone else who has held the position. She is now a Distinguished Senior Fellow at the Center for American Progress and an environmental consultant. Before taking part in the Institute of Politics’ panel discussion on climate change this Tuesday, Browner sat down with the Maroon and shared her insights on how climate legislation failed in Congress in 2010, what to expect from Obama's second term, and why it's so hard to get people serious about climate change.

Chicago Maroon: What would you say is the main reason that the 2010 cap-and-trade bill, the last major attempt at climate change legislation, did not pass the Senate?

Carol Browner: One of the primary reasons they never even got to a debate is that they ran out of time. They ran out of time because there was eight weeks that Max Baucus and [Chuck] Grassley spent trying to get an agreement on health care. Ted Kennedy died; I mean, a lot of things happened. Having said that, there were some pretty significant disagreements in the Senate, and we never really got the chance to see if we could bridge those disagreements. And they existed between Democrats and Republicans—we did have some Republican support, but they also existed among Democrats themselves.

CM: President Obama talked in grand terms during his inaugural address about dealing with climate change. What do you expect him to do in his second term?

CB: First of all, he’s on track to meet the 17 percent—that’s the Copenhagen commitment in terms of a 17 percent reduction of greenhouse gas emissions, and that’s largely because of the requirements for cars and trucks.... I think what you’ll see this term is more greenhouse gas requirements, particularly on new and existing coal-fired power plants.

CM: Why do you think that climate change is an issue that has not really caught on with the American populace? There doesn’t seem to be that big of a push to do something about it.

CB: There are many reasons. One, there has been a significant campaign by the polluters against action, and they’ve spent huge amounts of money to dissuade the public from believing that everything from climate change is real to [whether] we should do anything. That’s the primary reason, I think. The secondary reason is, and it’s a remote second, is that it’s always hard to do things before you’ve actually confronted the problem. So when we created the EPA, we adopted the Clean Water Act and the Clean Air Act, you could see the pollution. The Cuyahoga River was on fire, the smog was so bad. You could see the pollution. Here, we’re trying to prevent something before it actually happens. Because if we wait for it to happen, it’ll be too late.

CM:  Do you expect to get back into government at any point in the future?

CB: No,  I’m done. I’ve had a lot of stints in government. I started at this state agency, then the EPA. I said I would never go back, then the President asked me, and I was very honored and pleased to do it. I love public service. But there are other ways to serve—I serve on a lot of nonprofit boards, which is really fun. I work with young companies.