After split with Vikings, seniors finish strong against Beloit 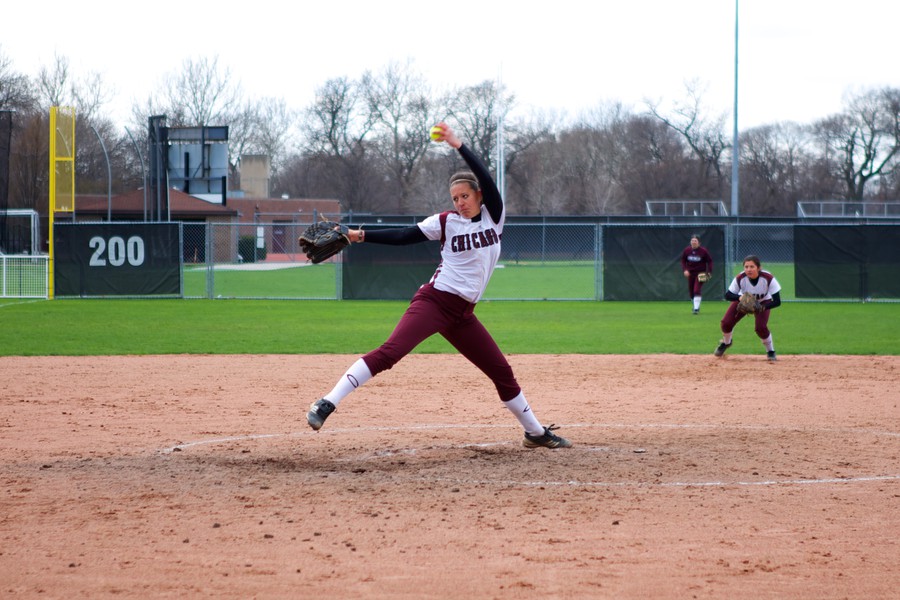 After a tough season of many close wins and losses, the South Siders finished off strong in their final stretch.

In a doubleheader at North Park (19–11) this Friday, the Maroons (17–15) bounced back for a decisive win in their second game after suffering a shutout loss in their first. Chicago then swept its final doubleheader against Beloit (7–29) at home, limiting the Buccaneers to one run in both games.

In their penultimate doubleheader of the season, the Maroons took on North Park on the road. The hosts held strong defensively throughout the game, with pitcher Casey Latal spinning a no-hitter. Their offense matched the effort with an RBI single and a steal of home plate in the second inning and an additional run off an error in the sixth, ending the game at 3–0.

“It is very bittersweet that I am wrapping up my senior season, but I couldn’t have asked for a better team to play with or better coaches to play for during my last season, and I know [fellow fourth-years] Vicky [Tomaka] and Jacqueline [Ryan] would agree,” Cygan said. “We are hoping to finish up the season on a high note.”

The team took a step in the right direction in its second game against North Park. Chicago scored four runs in the third with an RBI by fourth-year Jacqueline Ryan, a two-run single by first-year Kristin Lopez, and a single down the right field line by third-year Julia Covello to score the fourth run.

The Vikings countered with two unearned runs in the third inning, shortening the Maroons’ lead to 4–2. After these runs, the Maroons shut down North Park’s offense, while adding to their lead with one run each in the fourth, fifth, and sixth innings. First-year Jordan Poole pitched most of the game for Chicago and threw six innings with five hits and four strikeouts.

“In the second game against North Park, we were able to be aggressive with our base running and our approach at the plate,” head coach Ruth Kmak said. “We hit together as a team with execution and timely hits.”

For their final games of the season, the Maroons had a strong showing on their home field and blew out Beloit 10–0. The first victory featured a rare double-digits win, as well as a shutout of the Buccaneers. Cygan pitched for the South Siders and ended her career with an impressive no-hitter with 11 strikeouts on Senior Day. Ryan also had a strong performance for her last home game, with three RBIs and three hits.

The second game was more of the same, as the South Siders won 12–1. First-year Jordan Poole took the pitching reins from Cygan, and pitched for six innings with seven strikeouts.

The Buccaneers got the first run of the game, but couldn’t touch the scoreboard for the remainder of the day. The Maroons scored one run each in the second and fourth, and then added two more runs in the fifth. Though the Maroons were already ahead 4–1 going at the end of the fifth, a sixth inning slugfest, highlighted by Covello’s grand slam, put the result beyond doubt, and ran the score up to 12–1.

Looking back on the season, which has been inconsistent overall, the South Siders have some regrets. But Cygan is confident that she is leaving behind a program in good shape and has high hopes for the future of this team.

“Even though we did not produce as many wins as we may have liked, there have been many great moments throughout the season that are promising for the future of Chicago softball,” she said. “All of our first-years are having great seasons, and I am excited to see them continue to progress in what are sure to be awesome careers.”