Hunger Strike | One of these wings (is not like the others) 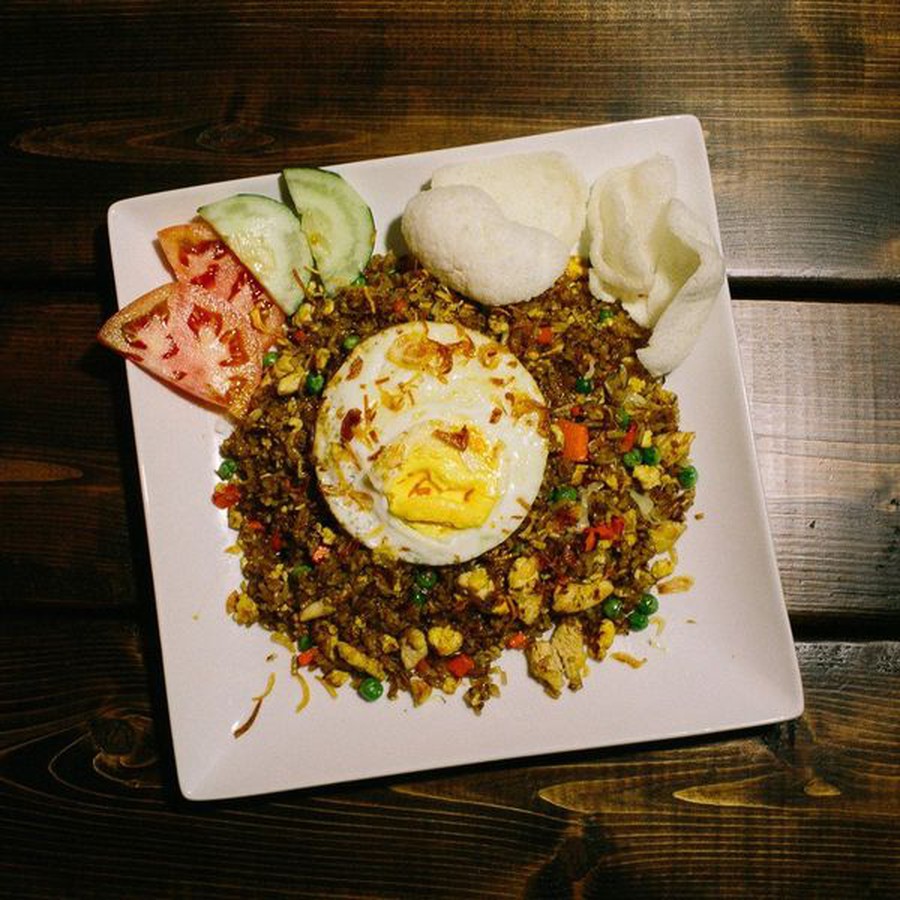 This one goes out to all the lovely angel investors and venture capitalists in the audience tonight, itching to spread your seed funding all over some hot and heavy young start-up. I bet your IPO is growing already, no little blue pill necessary. And now that I have your attention and wallet (at least, I hope that’s your wallet), let’s get down to some real business…Indonesian-themed restaurant, baby! C’mon, hear me out. I call it Water Buffalo Wild Wings, and it may or may not be loosely based off a recent meal I had at Rickshaw Republic in Lincoln Park.

Though Rickshaw lurks in the shadow of the colossal parking complex across the street, step inside and find yourself immersed in a festive oasis of equal parts Indonesian pride and kitsch. Overcompensation, but it works. At WBWW, we will brazenly steal this motif. Nay, we will elevate it. There will be no TVs, and “the game” will never be on. No one will soil their jerseys while attempting to eat 12 atomic chicken appendages. Instead, there will only be a disembodied wall of exotic masks facing an equally disembodied assortment of rice hats, just as at Rickshaw. But WBWW won’t stop there: Every order of wings will be presented in a simple red basket, riding atop General Kurtz’s shiny pate as he slowly emerges from the individual tableside cesspools. In his mouth is a moist towelette for your convenience. It’s gonna be awesome.

What’s so special about these wings anyway? I mean, who really needs over 20 different sauces, glazes, and levels of colon-scorching heat? Four monstrous limbs to an order, I doubt I would survive a back-alley encounter with whatever chickens these wings came from. They emerge from the deep fryer craggy and glistening, terrifying even, with a crust the likes of which I have never seen, nor thought possible. It tastes like a Chopped mystery basket where fortune cookies were turned into breading, or a Peking duck–style preparation where the skin was somehow separated, crisped and then fried just because it seemed like a good idea. It is a complete meal wrapped around a bone: appetizer, entrée, and dessert all at once. In fact, I already see the money pouring in, like the sticky ginger sauce that coats these wings and, given a millennia or two or a thousand, could conceivably preserve them like mosquitoes in amber.

Good luck with the rest of your meal, though, as these wings will endow you with the mystical power of the fat ass touch, with which anything your fingers come into contact with instantly adheres like an advanced chemical compound. You will repeatedly superglue yourself to yourself.  So make sure to change cutlery early and often, or else risk missing out on some of the more traditional Indonesian dishes that Rickshaw (and the soon-to-be-opened WBWW, amirite guys?) has to offer. The chicken satay is an example of the beautiful simplicity of skewered street food. The meat is surprisingly tender, and no one here is skimping on the peanut sauce. It’s incredibly creamy, and predominantly nutty, but I’ll be damned if this isn’t peanut butter—which is my rationale for digging into it with a spoon. Save some of the sauce for the Martabak, a kind of beef, egg, and onion hot pocket that seems to exist in one form or another on every corner of the earth. The crispy pancake shell is delicate, the filling within hearty.

In case you think Rickshaw is only capable of serving fine foreign finger fare, rest assured that the kitchen is capable of digging deep down into its Indonesian roots and reemerging with a batch of old school classics. There’s the Babi Kecap, a mix of pork belly and shiitakes stewed into tender oblivion by way of a sweet and salty soy sauce. It’s fantastic, because pork belly is inherently fantastic regardless of preparation, but surprisingly bland when mixed with more than two or three grains of rice. Fortunately the Batagor, fried fish and shrimp “dumplings,” fare better. While they are not so much dumplings as starch bombs attached to blocks of tofu, the whole affair turns decidedly gluttonous with the addition of even more peanut sauce to bind it together. The best bites are equal part fishy and peanut-y, with neither flavor dominating; the worst are heavy, sauce-laden chunks that seem to establish residence in your digestive tract. It’s not a good idea to let it get too cold, a tragic fate I endured on account of my even more tragic food greed.

If for some bizarre, inexplicable, unfathomable reason, WBWW fails to receive adequate initial funding (which I doubt, given the flawless business plan I just laid out), there is an equally masterful backup plan in place. It’s a more low-key, small-scale, fast-casual operation, built exclusively to serve the Nasi Lemak I had at Rickshaw. Pick your protein Chipotle-style, beef rendang or chicken curry, and what appears is a small volcano of coconut rice surrounded by small villages of accoutrements: some fried anchovies with peanuts, some curried squash and zucchini, ribbons of omelet, shrimp crackers, and Sriracha’s spicier cousin, Sambal. It’s a nice play on mix-and-match—a condiment bar is built into the plate. Just throw all the ingredients inside a crunchy shrimp chip, and let the flavors coalesce. Don’t bother hunting for any trace of nuance; embrace the glorious cacophony that captures the confounding mix of spicy, sweet, salty, and intensely savory that is the essence of Indonesian cuisine.

But you gotta act fast. This opportunity will not last long. As an added bonus, if you wire millions of dollars into my bank account within the next 15 minutes, enjoy a complimentary silk-embroidered hand towel to ensure your wing-eating experience does not come at the expense of your personal style. Water Buffalo Wild Wings: I’m telling you, man, it’s the next Pets.com, Myspace, and Worldcom combined. Even better, it’s all of those rolled into one, deep-fried, and doused in sweet, sweet sauce. A bit like Rickshaw Republic. Beneath that thick layer of crust, there might not be an overabundance of substance, or a particularly mind-blowing flavor experience. But the presentation is unique and unexpected, and how often can you claim to have enjoyed an authentic Indonesian dinner? That’s a selling point right then and there. If themed restaurants get one thing right, it’s that the “experience” of a meal can trump all other aspects, including the food. Fortunately, Rickshaw manages to successfully stake a claim in both realms.

Rickshaw Republic, located at 2312 North Lincoln Avenue, has an average dish price of $10.