Renaissance Society gets a rise out of Pope.L’s new exhibit 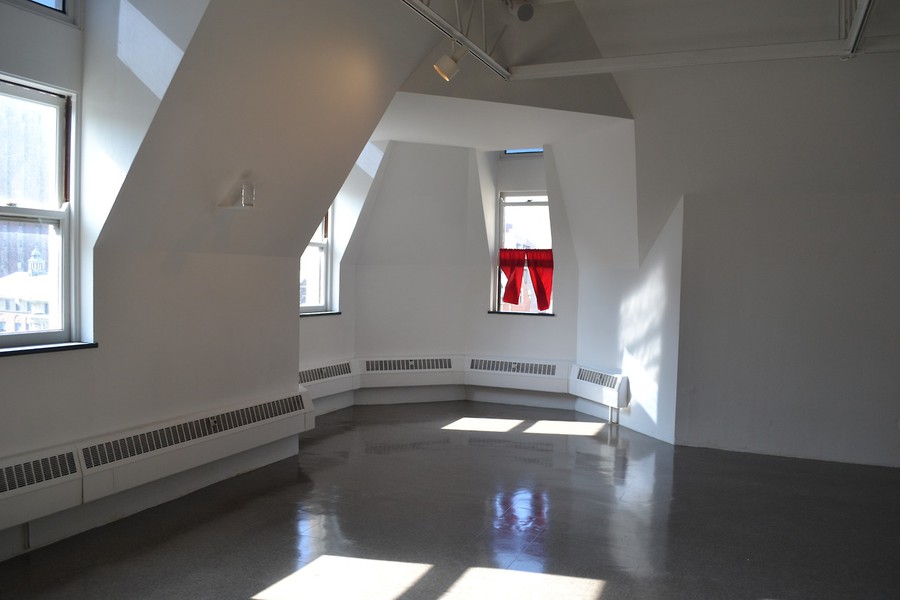 Courtesy of The Renaissance Society

Forlesen, the William Pope.L show at the Renaissance Society that opened last Sunday, capitalizes on our obsessive need to categorize and to make sense of the world around us, and it does this by consistently not making sense. Architecturally, the show is sort of an impossibly convoluted maze, and sort of a very basic grid, and therefore neither. We enter in, we see that peeling ketchup-smeared wall and then smell it (or is it the other way around?), and we think, immediately, something along the lines of, “What the fuck?” The mental sirens go off, the push-pull dynamic of simultaneous repulsion and curiosity kicks in, and we watch ourselves moving toward that spongy, fleshy surface, all the while wishing we weren’t.

Then there’s the art, which—unsurprisingly—occupies an even more ambiguous space in the room. Some of it, like “Ellipsis,” floats right above your head. Some of it covers real windows in the room; some covers constructed windows on constructed walls. Some of it is paired with the parallel strips of constructed walls perpendicular to the entrance—the skin-like “Curtain” and plastic-coated “Lense”—and the traditional heavyweight presentation of art-on-wall is probably at first a relief to some in its relative familiarity. However, the drawings themselves, collectively titled “skin set drawings: The space between the  letters,” are not so conceptually concise. What’s depicted is mostly obvious: letters, zoomed in, placed near enough to the edges of each piece of paper to prevent the letter from being fully seen or distinguishable. We know it’s a letter, but a lowercase “k” might well be an uppercase “R” from the waist down. Who’s to say, and does it even matter?

What’s drawn or painted becomes difficult to separate from the materials used to render it. Is a coffee spill just a coffee spill, or is it a painting of a coffee spill using spilled coffee as a medium? Self-referentiality is a driving concept in Pope.L’s work—particularly, as he revealed at his artist’s talk on Sunday, in terms of the space that is created when an object pulls back from the outside world and turns inward instead. When context is abandoned, connotations become abstract and disintegrate away from the thing in front of you, so that suddenly the thing becomes hyper-organic. Its significance moves into the realm of time, and into how the object engages with and lives through whatever interacts with it. It becomes soft and sticky, clinging to whatever reaches out to it. It bites down and fills in the space it can. “What’s filling this hole?” Pope.L asked the assembled audience, which was full of artists, students, and academics. Whatever gets close enough to fall in, it would seem.

Here, the relationship between wall and art isn’t as clear-cut as traditionally maintained. Forlesen is working in an alternate way. The wall becomes its own art object, an engaging force that extends beyond itself by relating only to itself. It is simultaneously an autonomous body and an anonymous one: Materially, it is totally opaque. It stinks, and the smell is undeniably known, yet impossible to pin down. It looks like skin, and the peeling bits and pieces on the floor are both familiar and unfamiliar and kind of—pitiable?

Skirt around the right side of this structure and you’ll be confronted crotch-first by an upturned wooden sculpture of a body waist-down, legs akimbo, with audio spilling out of its groin and red paint smeared on its behind. Take a few minutes to adjust to the “DuBois Machine” and continue around the back of “Quarter Shape (penis),” the bunker-like structure, to enter through a teal curtain. The smell is pungent. At the head of the structure’s interior space is “Unfallen,” a 17-minute video piece made from pornos bought from a shop in Maine. In the warm, dark, enclosed space, the audio in its distortion and maximized volume shakes the structure with a buzzing violence that almost hurts. You have no idea what’s going on, and these voices don’t sound human, but somehow they are. While you’re floundering in uncomfortable uncertainty, meaning is congealing among all the bodies in the room.

Pope.L’s work is smart in its delicate overlaying of its own conceptual subtlety with a constructed counterpart that loudly assaults the viewer. The cloak is magnificent; it has no stitches. While we’re busying ourselves with getting over that initial impact of rancid smell, of groin speakerphone, and of boorish porno moans, the art lets go of its spiky armor and sweetly, almost hilariously, unravels itself at our feet. It’s gross and oddly becoming at the same time. We don’t know what to think, so we engage with our senses instead. We humanize these weird objects and they absorb our own human presence—in all our perfumed, nail-biting, teeter-tottering glory—to become anti-monuments in their own right. Pretty soon you can’t tell one pack of bodies from the other. And that’s the point.

Forlesen will be running at the Renaissance Society through June 23.