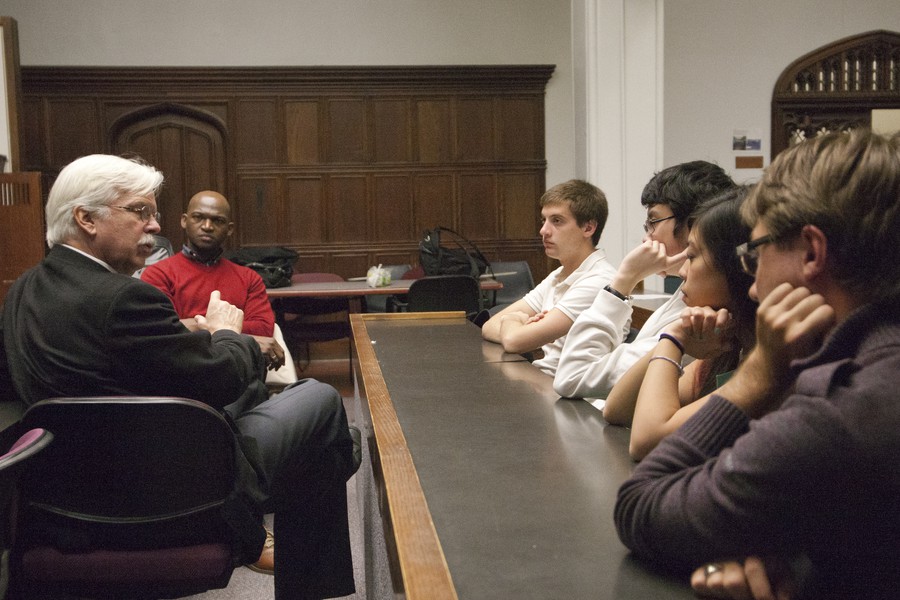 An interview with UAID President William Tian was added on April 7 at 2:46 p.m.

Local experts met to discuss the community-based responses to the AIDS epidemic on the South Side and the ongoing research in the field, in a panel hosted by the UChicago chapter of United Against Infectious Disease (UAID) last night. Panelists included UChicago Professor of Medicine Renslow Sherer, who focuses on infectious disease and global health, and Karriem Watson, a leader in community-based public health in Chicago.

Watson began by introducing a recent study showing that from 2010 to 2011, HIV incident rates in Chicago dropped by 22 percent. However, this decrease in the overall number of HIV infections was not reflected in the black male demographic, which actually saw an increase in the number of new infections. Additionally, out of the six Chicago neighborhoods with the highest rates of infection, four are located on the South Side. Englewood, a neighborhood adjacent to Hyde Park, is listed among them.

An early experience with a classmate testing HIV–positive led Watson to turn to community outreach programs, in particularly faith-based communities, to address the AIDS epidemic. However, discussing a sexually transmitted disease in a religious setting can be difficult, he said.

According to Watson, another obstacle left in facing the AIDS epidemic is that there is still a lack of access to care and preventative measures. Watson pointed to the different sexual health practices of two Walgreens locations within walking distance of each other on the South Side.

“It’s that mixed message. On one hand, you have the Walgreens on 75th doing free HIV testing with a multi-million dollar grant from the CDC, but within walking distance, there’s another Walgreens that has the condoms locked up,” Watson said.

Although there are many struggles still ahead in facing AIDS on the South Side, Sherer finds hope in the increased quality of modern medication.

“I would say that we have pretty close to a cure in effective therapy in that you can take one pill once a day and have near normal life expectancy,” Sherer said.

CHICAGO MAROON: How involved is UAID with AIDS in the community?

William Tian: UAID has only existed for a few months. [This panel] was the first step into our community involvement. Right now what we’re trying to do as an organization is build opportunities like this to get more students involved.

CR: What are the main focuses of the group?

WT: Our main focuses are AIDS, TB, and malaria. Right now, on the U of C campus we decided to focus more on AIDS because we live on the South Side of Chicago where four out of the six most highly infected neighborhoods [in Chicago] are located.

CR: How aware do you think the student body is of the AIDS epidemic in the South Side?

WT: I’m not sure. I think at some level we might know academically. We might have a sort of awareness that there is a higher incidence of AIDS near where we live. I don’t really think that we grasp how severe this is, how truly terrifying this is.

CR: Are you interested in putting together a mentorship program suggested by panelist Dr. Karriem Watson?

WT: We’re really in the early stages, but I think the mentorship program is one path we could take. I would also be very interested in training students in order to become informers was the term Karriem used. I think that’s probably very important work and something that students could easily become involved with.

CR: Is community outreach a part of the dialogue in the U of C pre-med program?

WT: I think it is, but I don’t think it’s enough a part of the dialogue as it should be. I think even with the whole incident with the trauma center a few weeks ago was a fantastic example of how even though we live on the South Side of Chicago and we even have institutions dedicated to helping these people, there’s still a huge disconnect in the community.