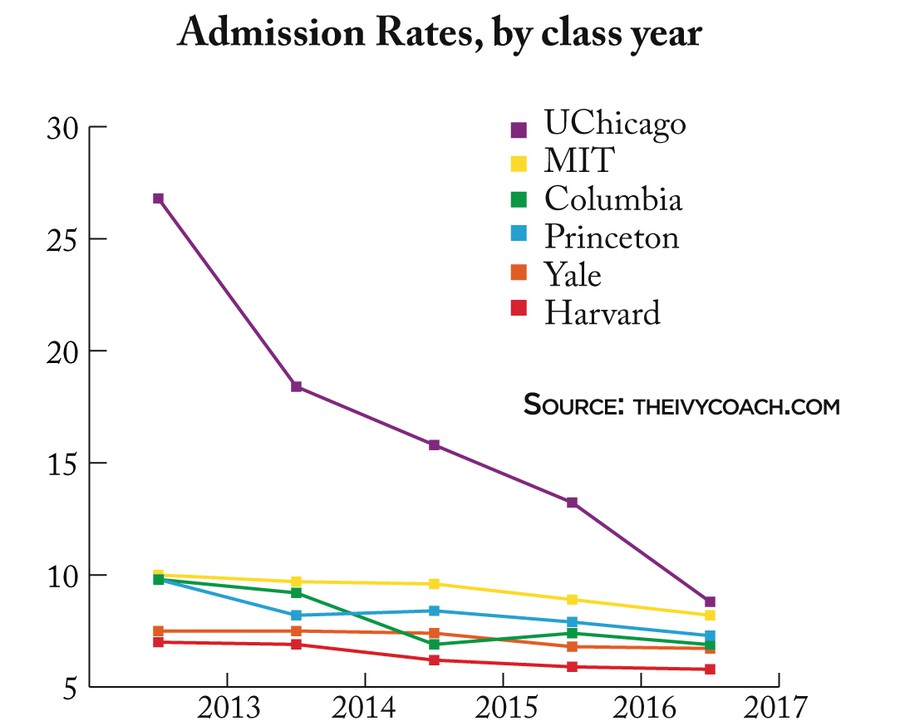 The admissions acceptance rate to the College has reached a record low, with only 8.8 percent of applicants receiving acceptance letters this year. Leading the national trend of surging applications to most top-tier U.S. universities, UChicago’s acceptance rate is down nearly five percentage points from last year.

A record 30,396 students applied to the College this year, marking an increase of more than 5,000 applicants from last year. Dean of the College John Boyer believes that the increase in applications speaks to both the larger national trend and the unique traction of the College itself.

“It’s a little of both, but I like to think it’s more the latter than the former,” Boyer said. “I think we’re a very special place, and that we’ve been much more effective at communicating that.”

Ingrid Yin, a senior from Barrington, a Chicago suburb, was among the local batch of accepted applicants. Yin is in the top five percent of her class at her public high school and received a 35 on her ACT.

“UChicago was my first choice, but I didn’t really consider it until my friend got in last year, and she talked about it all the time. She made it sound like all these students were exactly the kind of people I wanted to hang out with. They were driven, really passionate about certain subjects, the life of the mind, that kind of stuff.”

The launch of UChicago Promise, a multi-platform initiative which aims to assist both affordability and access to college for Chicago high school students, was cited by Boyer as one explanation for the increased number of local applicants. Through the distribution of grants, the program allows for admitted Chicago residents to attend the College loan-free.

“We got a lot more applications from students in Chicago, but I think we’ve always been an attractive option for students from parochial and public high schools. The majority of our students came from the city of Chicago up to the 1950s. We were what they called a ‘streetcar school’; most of the students lived at home and came here on street cars or buses,” Boyer said.

“To the extent that we’re reaching out to students from local high schools, I think this is returning us to a tradition where we began 120 years ago.”

According to Boyer, the swell in local applicants resonates with a wider commitment of the College to capitalize on its relationship with the city.

“The other thing that I think has played a big role [in the low admissions rate] is the city of Chicago. There have been a number of studies done by sociologists and demographers recently about the trend of young adults wanting to live in large metropolitan areas after they graduate from college in the United States…. Chicago is driving part of the success as well. The city ought to take credit for it.”

Kelton Anderson, an admitted student from Minnesota, pointed to national rankings in explaining the increase in applications.

“I think with UChicago being ranked number four by U.S. News and by Forbes, a lot of kids look at that to try and figure out where to apply. I think consistently being among the top 10 draws more attention to the University.”

The University does not disclose breakdown data at this stage in the admissions process, but it reaffirmed its commitment to attracting high-ability students from a diverse range of socioeconomic backgrounds in the press statement. As of 2012, one-fifth of all college students benefit from Odyssey scholarships, which reduce or eliminate loans for students with annual household incomes of less than $90,000. Similarly, 18 percent of UChicago students receive Pell Grants, situating the University in eighth place in terms of economic diversity at the nation’s top 25 colleges, according to U.S. News & World Report.

Michael Borde, an admitted student from the Chicago area, is a recipient of an Odyssey scholarship. However, he explained, that further negotiation of his financial aid package was still on the horizon.

“My mom is negotiating for a higher package. I’m not sure how it will impact my decision,” Borde said.

Boyer believes that this trend of the ever-decreasing admissions rate is unsustainable in the years ahead.

“I doubt we’re going to see these kinds of surges year after year. I think that’s probably not realistic. I think where it will level off I can’t predict—we may go up or down in terms of applications next year, and then level off. I suppose you could say we should be able to get as many applicants as the Ivies, but I think we’ve already surpassed a number of the Ivies in application numbers,” he said.

Four Ivy League schools—Cornell with 40,006 applicants, Harvard with 35,022, Columbia with 33,460, and UPenn with 31,219—surpassed the College in terms of applicants. However, Brown, Dartmouth, Yale, and Princeton all received fewer applications than UChicago.

“I’m not so concerned about the numbers as I am that we are communicating about the school and telling the kids that might consider coming here. If everyone who likes our kind of education knows about us, then I’m satisfied.”