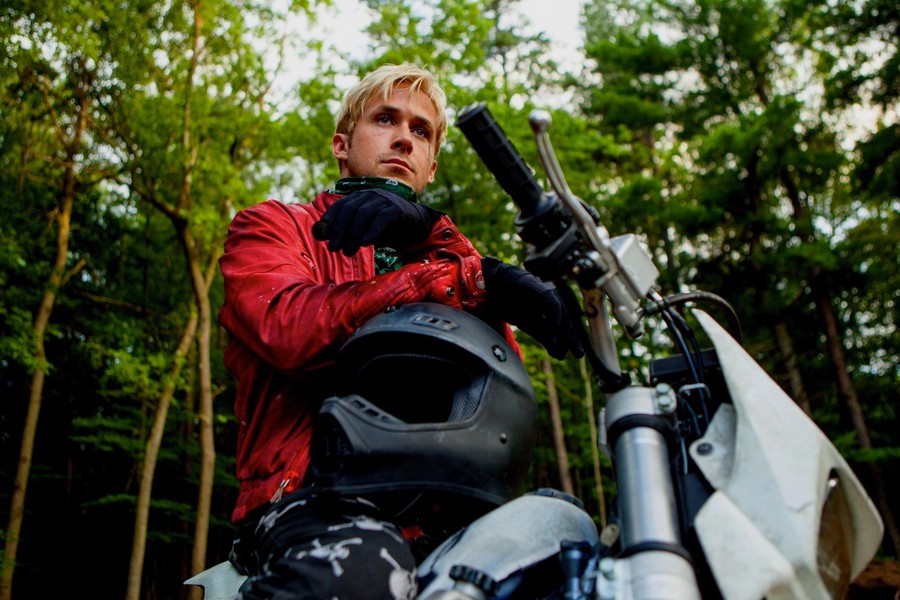 Resembling the narrative of Alfred Hitchcock’s classic Psycho, Derek Cianfrance’s The Place Beyond the Pines makes audiences turn their heads and whisper, “Wait...did that really just happen?” The two films’ resemblances end there. Yet it is important to note that this movie does not heavily rely on Ryan Gosling and his I’m-a-badass-I-don’t-talk-much character but instead stands on its own and leaves the audience with a powerful and memorable ending.

The film begins with a long tracking shot revealing the muscular back of Luke Glanton (Gosling). Luke is strikingly similar to the driver Gosling played in his 2011 film, Drive, as if the character were simply reborn in the body of a heavily-tattooed motorcyclist. This opening scene stalls on disclosing the star’s face and continues to film his rugged back as he walks into the motorcycle stunt arena. Cianfrance manages to sneak Gosling’s stuntman into the globe of steel without breaking up the long take, tricking us into briefly thinking that the producers have lost their minds and thrown Gosling into the dangerous globe of death.

Fortunately, the stuntman is talented— and Luke lives on. The brilliant opening shot begins an epic tale of two men and their sons, who cross each other’s paths through time and space. The brief yet significant encounter between Luke and cop Avery Cross (Bradley Cooper) results in an intertwining story of police corruption, family, drugs, violence, vengeance, and legacy. With slow-beating music in the background, the story unravels in a deceptively rapid, yet deliberate pace through fifteen years’ time.

Unable to support his newborn son Jason and lover Romina (Eva Mendes), Luke turns from his motorcycle stunt job to bank robbing as an occupation. However, he fails to become a loving father when his last and most desperate mission goes awry at the hands of Officer Cross. Luke ignores the warning of his friend Robin, which is also the best line of the film: “If you ride like lightning, you’re going to crash like thunder.” So Luke continues to ride.

Officer Cross, on the other hand, connects deeply with Luke, who has a one-year-old son like he does. Fast-forwarding 15 years from the fathers’ encounter, the narrative transitions into the struggles and collision of the two children. AJ Cross is the unfortunate result of his father’s corruption. Officer Cross has exploited the police corruption to rise in status—meanwhile intentionally avoiding his son, who becomes a spoiled druggie because of his of lack of parenting.

AJ moves in with his father, who is now running for New York State Attorney General. At a new school, AJ meets a new friend Jason. Fate joins the sons of the two unfortunate men, and the fathers’ legacies are set to untangle.

Here I ponder what happened in these fifteen years that led to such an irreparable situation. The consequences of the two distinct men and their corruption are the delinquencies of AJ and Jason, which become almost too sad and sickening to watch. The lack of a true father is detrimental to the behavior of the sons, and whatever happened during the 15 years of time that Cianfrance has chosen to skip over does not seem to be so important as the legacy that Luke and Avery’s fateful meeting left behind.

The Place Beyond the Pines shows the inevitable cycle of the degeneration of two families over time. “If only” is a question that lingered in my mind long after I left the theater. But fate is a powerful tool for director Cianfrance, and there are no “ifs” in his rulebook. Legacy is fate, and there is only one conclusion to his story.