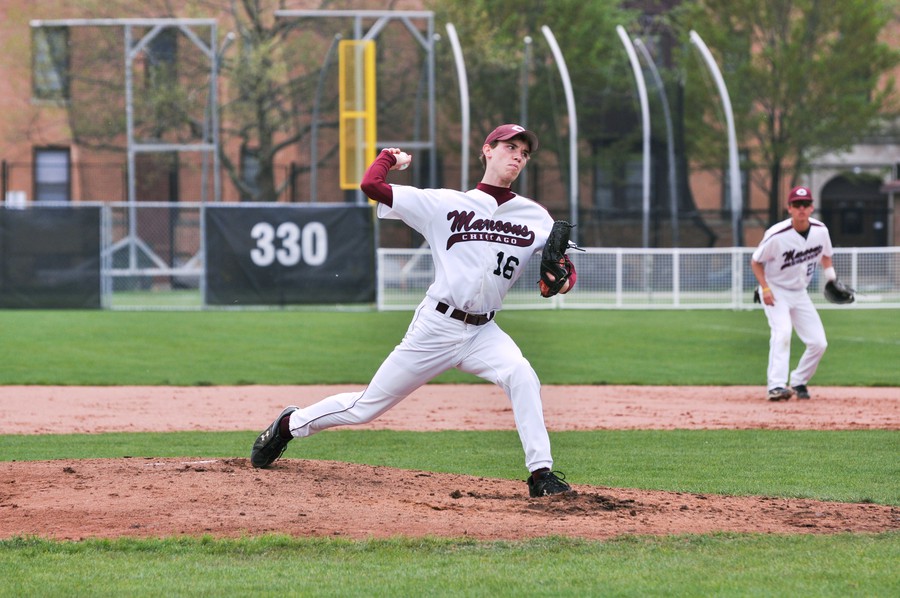 The South Siders (11–7) swept their doubleheader against the Robert Morris–Springfield Eagles (5–12) on Sunday. The Maroons won the first game 17–3 before earning a closer 9–5 victory to secure the sweep.

The first game began with five scoreless innings for both teams as second-year Andrew VanWazer kept Robert Morris at bay with his fastball–breaking ball combination pitches and the Eagles’ John Fike limited the Maroons to four hits across the first five frames.

“While we were hitting the ball solidly we were having bad luck in that most hits were directed right at their players,” second-year catcher Brenden Dunleavy said. “[Robert Morris] just had to avoid mistakes and the competition stayed relatively even.”

The Eagles started off the sixth inning with three unearned runs after four hits and two errors. Chicago immediately bounced back, however, racking up a startling 17 runs on 13 hits in the bottom of the sixth.

Fourth-year J.R. Lopez went 3-for-5 with four RBIs and fourth-year Steven Schwabe and second-year Kyle Engel each had three hits and three RBIs. The stands began to fill toward the end of the game as third-year William Katzka, fourth-year Jack Cinoman, and third-year Connor Bartelman collected two hits and one RBI each. Fourth-year Drew Nicholson was swapped in as pitcher in the seventh inning, allowing one hit and recording a strikeout to end the game.

With the Eagles’ morale relatively low after the Maroons’ offensive outburst, it was time to begin the second game.

Chicago took its momentum in the second game, piling on the hits in the three innings and jumping out to a 5–0 lead.

In the first inning, fourth-year Ben Bullock scored after Steven Schwabe’s ground ball to the second baseman was mishandled and booted by the second baseman into foul territory. Due to an errant throw Bullock would come all the way around to score.

There were RBI hits by second-years Anthony DeRenzo and Schwabe, which led to two more runs in the second inning.

DeRenzo who went 3–3 in the game with 3 RBIs explained the approach that led to his success: “I swing at fastballs whenever I can... Also I stole a base.”

The Maroons almost blew their early lead after second-year starting pitcher Kyle Nitiss gave up four unearned runs in the fourth. Robert Morris tied the game in the fifth inning on another unearned run, although the situation could have been much worse as Nitiss worked out of a bases-loaded jam.

The Maroons pulled ahead again in the sixth inning when they took advantage of three errors by Robert Morris to score four unearned runs. Reliever Ray Kim would be credited with the win after pitching a solid 1.2 scoreless innings.

Chicago has now won four games in a row and will put its win streak on the line today against Dominican (8–15).

The Maroons’ pitching staff will have to watch out for the Stars leading hitter Joe Krasny, who boasts a .347 average. The Stars are coming off of a doubleheader split with Wisconsin Lutheran University. But, according to fourth year outfielder Jack Cinoman, “After a day off practice the team is ready to come out strong against the opponent. We are really happy with our recent play and are looking to extend this winning streak as long as we can.”

The game is scheduled for 3 p.m. today at Stagg Field.