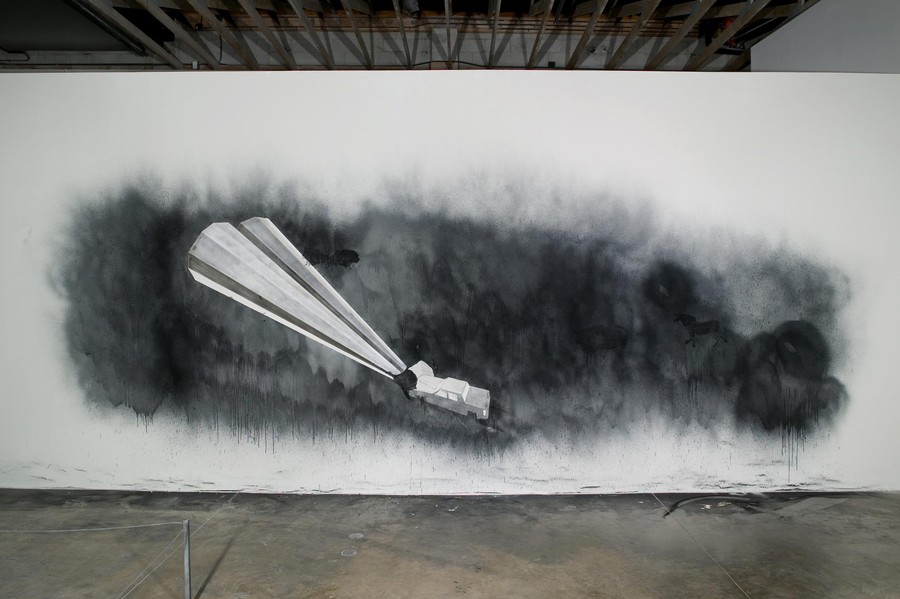 The Arts Incubator in Washington Park will be bustling with events in the coming months. The space opened in March on the corner of Garfield Boulevard and Prairie Avenue in a building right across from the Green Line station. The University of Chicago’s Arts and Public Life initiative is affiliated with the venue as a partner to improve, and more importantly, embrace the arts culture in the community.

On Wednesday, the Arts Incubator held a talk event with a Los Angeles–based artist, Edgar Arceneaux. The series, The Artist’s Life, is focused on connecting the audience and the artist on a personal level.

The talk began by exploring Arceneaux’s background: where he came from, where he grew up, and how many siblings he has. Arceneaux told us that he was named after his grandfather, whom he resembled in looks, in the way he talks, and even in his gait. Though he does not remember his grandfather, the stories of their uncanny resemblance inspired him to explore concepts of spirituality, religion, and metaphysics in his art. How can you be yourself and someone else at the same time? Such questions of self, other, and shared identity appear often in Arceneaux’s work.

His art revolves around illustrating non-linear narratives, but he places a great importance on the installations of art in physical space as well. How ideas accumulate in the space of a gallery is just as important as the art. “Ideas are amorphous. They can fill any vessel,” he said. Thus, the shape of the vessel is a crucial way for Arceneaux to conduct his ideas.

The open environment of the talk allowed the audience into the conversation and let them meet Arceneaux as a person first, before they met him as an artist. The talk enabled the audience to discover the paths that he took, people, and instances in his life that inspired his passion for art.

After the talk, I had the opportunity to speak to Kellie Romany, whose work is on display in the Incubator, and who graduated from the School of the Art Institute of Chicago in 2011. Her exhibition, Gestate, had just launched on the day of my visit, May 8. Romany was excited and nervous about her display, which celebrates the beauty and seductiveness of the female body and genitalia.

Like Arceneaux’s work, Romany’s art was also deeply personal. As a black woman, the subject of interracial birth and mixture of racial colors clearly played a dominant role in the conceptualization of her various multimedia pieces. The exhibition Gestate will remain on display until June 9.

All in all, the Incubator is an attractive venue for people in the surrounding community who want to truly connect with artists. However, as Arceneaux said, it is also a space for the artists to incubate their talents, to take risks, and to learn how to push themselves over the “edge” for their final invention.

As exciting as the Incubator is, program manager Allison Glenn wishes there were more students who would connect with the facility. Perhaps it is because the venue is so new or because the location is a bus ride away from campus; currently, the Arts Incubator is almost unknown to the general University community. Nevertheless, the administrators at the Arts Incubator are enthusiastic about increasing student traffic. Not only does the Incubator provide a chance to build relationships with skilled artists, but, as Glenn eagerly mentioned, there’s also free food and drinks at every event. Calling all students: free food. Did you hear that? What’s not to like?