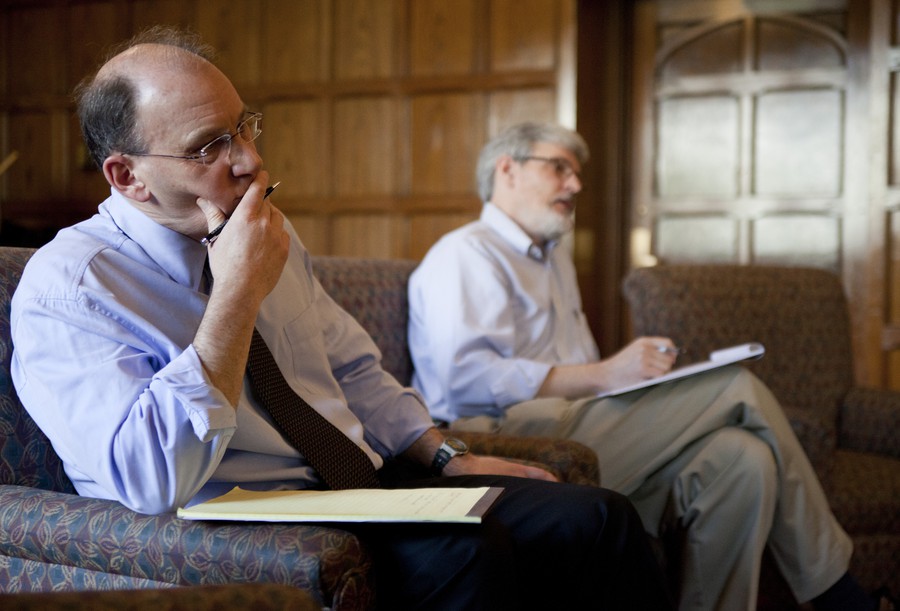 History department Ph.D. student Toussaint Losier, who was charged with three counts of resisting arrest during the January 27 protest at the University of Chicago Medical Center (UCMC) that were later dropped, revealed discrepancies between his arrest report and new video evidence of his arrest during an open meeting with the Ad Hoc Committee on Dissent and Protest yesterday. While the report claims that he refused to leave the hospital’s Center for Care and Discovery (CCD) and instigated further protest, the video shows that he was walking off the property when police officers pushed him back to the hospital. Losier intends to file a complaint with the UCPD’s Independent Review Committee based on this new evidence, which was distributed to the Maroon and other media outlets that attended the meeting yesterday.

According to University of Chicago Police Department (UCPD) Officer Victor Vazquez’s narrative in the report, he heard Losier say to the crowd, “We’re not leaving until the dean comes.” Vazquez approached Losier and warned that he would be arrested if he did not leave the property. When he refused, saying, “I’m not going anywhere until I speak with a dean,” Vasquez told Losier that he was under arrest and “attempted to place him in custody.”

The video shows Losier in the moments before his arrest, which was previously unseen in the videos that circulated around Facebook and YouTube shortly after the protest. Losier slowly walks away from the site of the protest. As he heads toward the intersection of South Maryland Avenue and East 58th Street away from the lobby of the CCD, Vazquez pulls him back toward the lobby. Losier faces the officer, who pushes him back toward the lobby. Losier’s hands are up by his head during the exchange as he mouths something to the officer.

This discrepancy was illuminated in light of the broader discussion during the meeting about UCPD practices, among other campus-related protest issues.

Although the committee is made of six professors across the divisions, only two of them, Law School professor David Strauss, who serves as committee chair, and physics professor Emil Martinec, attended the event.

Strauss explained that the committee’s role is to present recommendations for new policy on dissent and protest at the University in a broad sense, not to make policy decisions regarding UCPD. That, he said, is up to the discretion of the provost.

He highlighted two broad areas of focus the committee aims to address in its ultimate report to the provost: how, where, and when dissent and protest can be done on a campus and the relationship between the University and the community with regard to demonstrations. According to Strauss, UCPD Chief Marlon Lynch told the faculty committee that UCPD has revised its officer training program to emphasize crowd control procedures in response to the incidents.

After Strauss and Martinec’s introduction, the conversation veered sharply toward issues surrounding the January 27 and February 23 trauma center protest incidents, including violence by UCPD officers, unethical surveillance of protesters by UCPD, and the dean-on-call process.

Second-year Ava Benezra expressed her concerns that the conversation was too focused on dealing with what actions should be taken specifically to these incidents, as opposed to the UCPD policies as a whole during the protests.