TEDx takes it down a notch 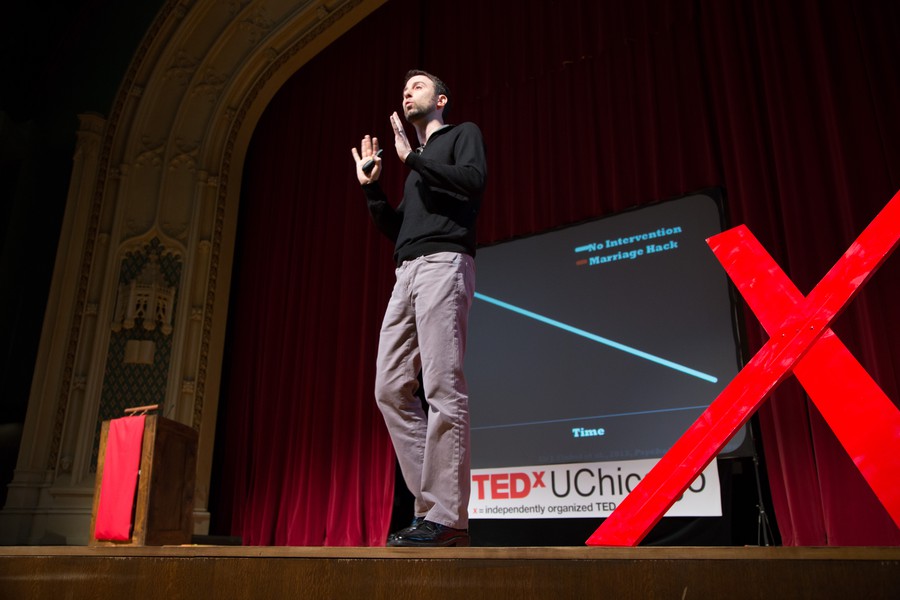 Eleven speakers chosen by UChicago students came together to share stories and ideas related to the chosen theme, “Theory in Action,” at the third annual TEDxUChicago conference on Saturday.

TEDxUChicago, the independent iteration of the nonprofit TED (Technology, Entertainment, and Design), tries to promote “ideas worth spreading” in brief speaker presentations on a local scale. UChicago’s version, with speakers as diverse as human rights activists and psychology professors, also featured a student selected from a pool of 40 applicants: this year, first-year Robert Lipman, who created an underground restaurant known as The Hearth.

The conference was completely student-coordinated, with a group of nine executive board members, all new this year, and 38 other volunteers.

The new board members were only one of many changes that took place, several of which were due to reduced funding. The conference was smaller, with 11 speakers, instead of 15 last year and 14 the year before. The $50 student VIP tickets, which had included lunch with speakers, entrance to a post-conference cocktail party, and a gift bag, were converted into an option of paying $10 beyond the regular price for preferred seating. They also cut the party completely.

“We cut the cocktails for a couple reasons. I thought it didn’t really add anything. You can talk to speakers during the breaks—they are walking around so you can chat them up. There is no reason for us to spend Student Government money to buy alcohol for people,” said third-year Spencer Watts, the logistics head of the conference.

Accompanying these changes was a drop in attendance, with around 150 people attending this year compared to around 500 from last year and around 900 the year before. First-year Monica Lanning, a volunteer at the event this year, said that she and another volunteer thought that the reason for the decrease in attendees could have been bad timing, with the annual Scav Hunt being held during the same weekend.

Third-year and curator of the event Emily Bao said that financial issues forced the board to make cuts. While none of the speakers are paid for their speeches, the organization covers their travel accommodations and the event’s catering, A.V. equipment costs, the Mandel Hall rental, the programs, and various marketing efforts.

The funding request forms stated that “our organization is currently in debt because of the financial actions of the previous two years’ boards.”

Considering the debt from the previous years, the team decided to focus on only spending within its means this year. It cut its proposed spending from $45,553 in 2012 to $34,820 this year. Most of the funding for the event came from the University through the SGFC and the Dean’s Fund, but private sponsors contributed as well.

Bao said the organization was successful in its attempts to come in under budget.

“Our goal was to not make a deficit. We definitely at least broke even. We did well this year,” Bao said.