The Preakness Stakes, close relative to the Kentucky Derby and the Belmont Stakes, will happen this Saturday. Toast the winning horses with a mint julep, "Black-Eyed Susan," or "Belmont Breezer," made with whiskey, sherry, and lots of juice. 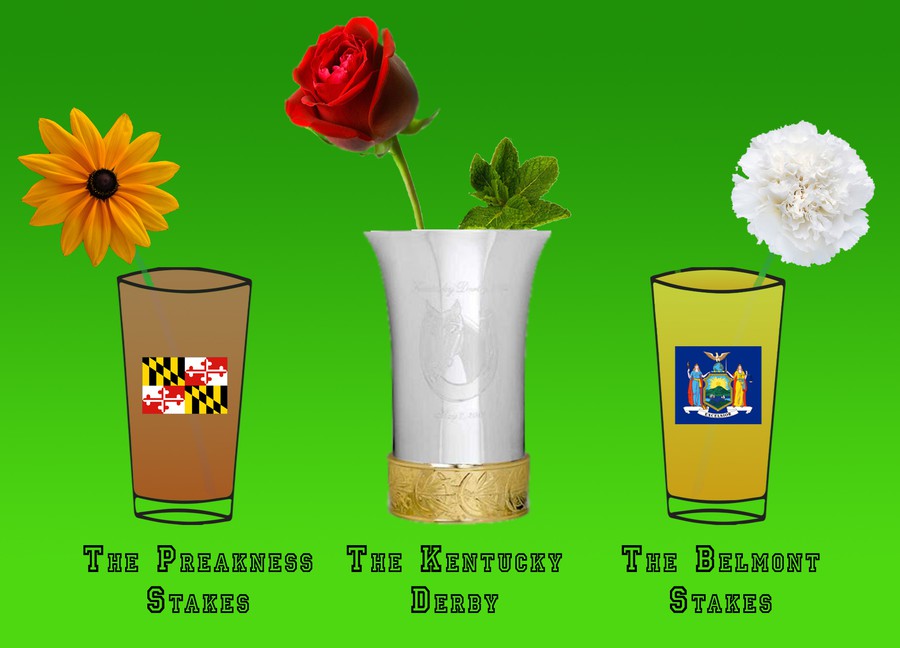 This Saturday, the 138th running of the Preakness Stakes will occur at Pimlico Race Course in Baltimore, Maryland. The Preakness is the second jewel in the series of three thoroughbred horse races known collectively as the Triple Crown. The Preakness Stakes joins the Kentucky Derby, run annually on the first Saturday in May, and the Belmont Stakes, run every June, in celebrating the atmosphere of joviality ushered in by warm spring weather. Naturally, the combination of warm weather, high stakes, and the vestiges of the storied East Coast thoroughbred racing culture that still remain at these events makes them the perfect opportunity for cocktails.

Like the three different flowers that adorn the winners’ blankets, each race has its own signature drink, some more famous than others. The Mint Julep, Kentucky’s entrant, is a sweet and strong infusion of bourbon with mint and sugar that is cool and refreshing when served with copious amounts of ice. The Preakness puts forth the Black Eyed Susan, named for Maryland’s state flower, a cool pink lemonade made of vodka, lemon juice, elderflower liqueur, and blackberry syrup. And finally, the Belmont Stakes offers a recently innovated contender, the Belmont Breeze, which consists of bourbon, orange juice, cranberry, mint, and sherry (goodbye, the dated White Carnation). Whether this Saturday, when the “Run for the Black Eyed Susans” kicks off at 4:30 PM on NBC, or anytime this spring when the warm weather causes your mind to drift to the elegance, pedigree, and magnificence of thoroughbred horse racing, these drinks are a sure way to relish the moment in style.

The Kentucky Derby: The Mint Julep

Of the three jewels of the Triple Crown, the Derby is the only one that has been run consistently since 1875.

Churchill Downs, the track where the Derby is run, was built by Colonel Meriwether Lewis Clark, Jr. His familiar name originated from his grandfather, William Clark, and his traveling companion, Meriwether Lewis, the famous dynamic duo of westward American exploration and Manifest Destiny. Small world, right? The winner of this race is awarded a lush blanket of 564 red roses, which is why the race is sometimes referred to as the “Run for the Roses.”

The Mint Julep is without doubt the best-known of the Triple Crown cocktails. It is essentially straight bourbon, infused with mint, and cut with sugar. The key to this drink is to have lots of ice on hand (a pewter cup to drink out of doesn’t hurt, either). Begin by muddling eight mint leaves and a teaspoon of sugar in the bottom of a glass. If the idea of doing this for each drink seems daunting, consider making a mint simple syrup to save time. To do this, combine equal parts sugar and water in a saucepan and bring to a boil. When the liquid begins to boil, turn off the heat and add as many mint leaves as you want. The hot sugar will draw the oils out of the mint leaves, where the flavorful chemicals are stored. Thus, when the mixture has completely cooled and the mint removed and discarded, all that will remain is a flavored syrup.

Put everything in a cocktail shaker, and add a ton of ice. Transfer to a glass and top with more ice and garnish with however much mint you want.

The Preakness Stakes: The Black-Eyed Susan

Black Eyed Susans aren’t in bloom until months after this race is run, so the winners are actually presented with a blanket of yellow daises painted to resemble Maryland’s state flower.

Any Maryland native knows the Preakness Stakes is the most interesting and worthwhile race of the Triple Crown. It is significantly shorter than either of the other races, which are both over one mile in length. So it’s more of a sprint than a race. Trappings of elegance remain, but today the Preakness has become a sort of enigma, echoing the commercialization of similar events under the lens of national sports media and sponsorships. For example, this year Miami-based rapper Pitbull will perform at the Jägermeister Infieldfest 2013, where spectators can be counted on to attempt the ritualistic “port-a-pot” run while being assaulted by beer cans (http://youtu.be/IIcyFSYhvV4). This must be seen to be believed.

The Black-Eyed Susan is the state flower of Maryland and the flower that adorns the Preakness winner’s blanket. This drink was allegedly created by a woman named Gina Chersevani Dundee, so be sure to thank her when you get a chance.

Combine vodka, St. Germain, and lemon juice with lots of ice in a cocktail shaker. To this, add simple syrup created by bringing equal parts sugar and water to a boil, adding mashed blackberries, and straining (once cool). This is just lemonade – lemon, sugar, and water – but with the delicate flavor of elderflower liquor and the tartness of blackberry. There’s plenty of time before Saturday to stock up on all ingredients.

The fastest running of the Belmont Stakes was on June 9, 1973, when famed horse Secretariat won the race and thus took home the Triple Crown, the first time for an American horse in over 25 years.

The eponymous Belmont racecourse is named after August Belmont, a famed New York politician of the American Civil War. A unionist democrat, Belmont used his influence in Europe to encourage the wealthy Rothschild banking empire not to loan money to the confederacy and personally met with the British Prime Minster and Napoleon III to force their neutrality in spite of disastrous economic consequences for their nations resulting from the blockade of confederate ports and the subsequent collapse of worldwide cotton production.

For many years, the traditional drink of the Belmont Stakes, run annually at the eponymous track in Nassau County, Long Island, was called the White Carnation, an apparently appalling a mixture of vodka, orange juice, peach schnapps, and heavy cream. Recently, however, this drink’s overall funkiness and tendency to curdle have caused it to fall out of favor; it has since been replaced with the Belmont Breezer, created by New York bartender Dale DeGroff in 1998.

Begin by combining the bourbon, sherry, lemon juice and sugar in a glass. Stir vigorously until all the sugar is dissolved, then add a splash each of cranberry and orange juice. Transfer to a glass, garnish with mint and a piece of orange rind, and enjoy.