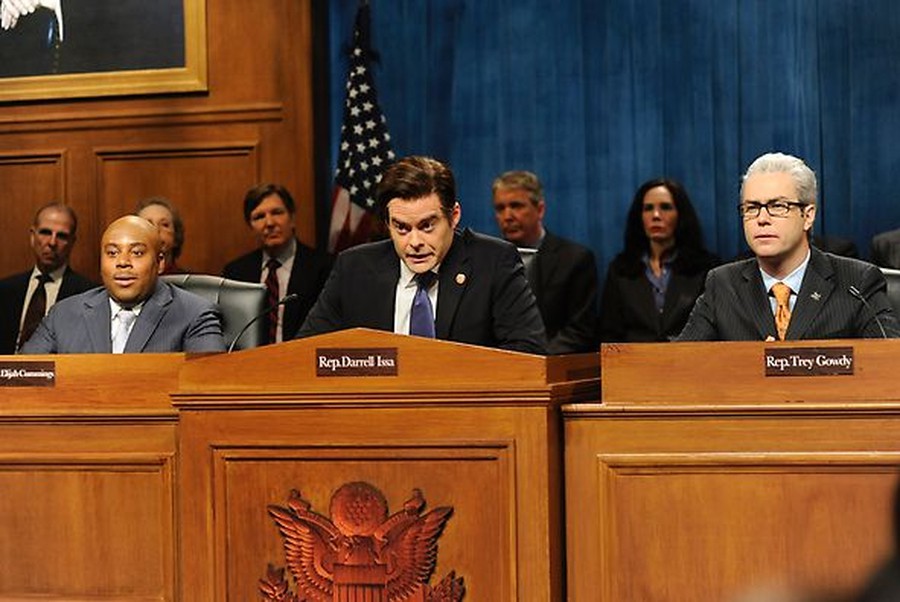 I watched two comedy shows last Saturday. The first was Saturday Night Live. I’m usually critical of the show, and this episode, hosted by veteran SNL player and sketch actress Kristen Wiig, was particularly lousy. Wiig’s legacy lured the looming specter of episodes past, occasioning the recurrence of a few mercifully retired characters and sketches. Worse yet, the cold open followed SNL’s now formulaic law of political satire: Take the week’s three biggest news stories and smash them together until you get a sketch. If the stories don’t fit together naturally, simply insert a nonsensical cameo. Lo and behold, 11:30 p.m. rolled around and out came a sketch in which Jodi Arias and Ariel Castro were called to testify at the House Committee on Oversight and Government Reform hearing. But wait, don’t judge the sketch before the big reveal: Arias and Castro don’t know anything about Benghazi—they’re just felons! If the setup and reveal of the sketch were any more unoriginal and flat, I’d be convinced that it was some sort of insincere self-parody.

The second, decidedly less popular show I saw was The Late Live Show, a hodgepodge of jokes in the form of a late-night talk show at ImprovOlympic. Saturday was its final staging, as its host, Joe Kwaczala, and several other cast members are moving to Los Angeles. From the show’s outset, it was clear that the writers enjoy a tremendous degree of artistic freedom; at one point, Kwaczala said that, if left unattended, they’d end up with a show full of jokes about “wieners and dog wieners.”

And on Saturday night, the audience’s gratitude was overwhelming. A frenzied crowd of friends and fans accumulated through the show’s three-year run filled iO’s Del Close Theater, laughing, cheering, and chanting the show’s final chorus: “Fuck The Late Live Show/And fuck being funny/ Fuck The Late Live Show/And long live money.” This song was the perfect note on which to end: a massive in-joke that simultaneously expressed both love for the show and frustration with the need to move on to careers with less artistic freedom and more economic comfort. Because that’s precisely what happens to shows like The Late Live Show: They burn brightly for a few years, fueled by naïve talent and passion, before their component parts are disassembled and absorbed into constellations like SNL or The Onion or late-night TV.

This funneling effect has led to an absolute dearth of originality in popular comedy. Talented young comedy writers and performers stream into New York and L.A., but their individual voices are swallowed by the voice of established outlets. And increasingly, these established outlets have demonstrated a noxious penchant for addressing every major news event, hit show, and viral video that seizes public attention for a fleeting moment. Of course, none of this is new; boring, stultifying shows like Workaholics and Modern Family have always existed on TV in one form or another, trading on slang and cultural references to get laughs.

What is new, however, is the rampant pandering to online audiences. Take The Onion, for example: Since relocating from New York, the satirical news outlet has been engulfed by a corporate structure that pushes its writers and producers to release four or five videos within a single week, rather than spending two or three weeks perfecting a single video. This strategy, like that of SNL, is a response to the advent of social media as the dominant means of distributing content. Because any major news event is a source of competition for attention online, there is a constant push to be first and a diminished need to be the best.

If you follow The Onion, you may have noticed this effect in the aftermath of any major news story in the past year. Rather than provide legitimate insight or a fresh take, The Onion increasingly relies on its voice to carry the weight of a joke. In the wake of tragedy, you’ll see friends share articles like “This What World Like Now” (Boston Marathon Bombings) and “Fuck Everything, Nation Reports” (Newtown Shootings) on Facebook and Twitter, but it’s difficult to imagine anyone actually laughing at them. Because they’re not jokes, really—they don’t challenge the reader’s opinion, nor do they offer any original insight. They are just head nods towards an apathetic audience of educated, left-of-center young adults.

Whereas good comedy toys with clichés in order to expose them as such, this new breed of pandering confuses social commentary with the creative restatement of clichés and social norms. On a smaller scale, the problem might make more sense: If Off-Off Campus started writing sketches about Harold’s Chicken and Occam’s Razor started making jokes about hipsters smoking outside of Cobb, there would be no reason for you to leave your filthy bed and go watch them (us) perform.

Comedy is about challenging, not affirming, public opinion. So go watch some live comedy every now and then, if only to have an experience in which the sole aim is making you laugh. At the very least, if you’re going to tell your friends a quick joke, skip the litany of tired collegiate punch lines (America, bacon, racism, zombies, Greek life, dining halls, hipsters, midterms, finals, sex, dorms, sleep, alcohol) and offer something unexpected. Give them wieners. Give them dog wieners.