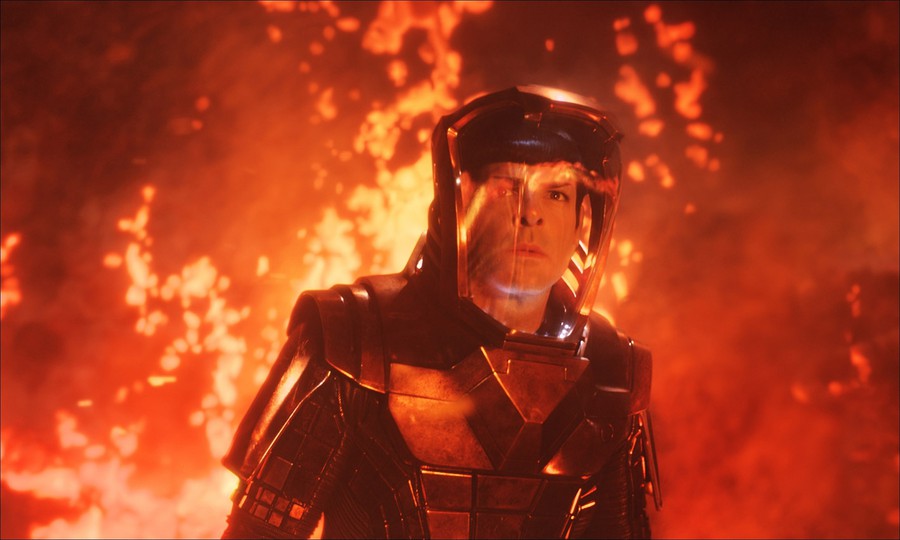 Looking back at the old Star Trek TV episodes and movies can be a bit jarring today. Lacking the giant budgets and flashy special effects of today’s sci-fi, these older incarnations focused more on characters and plot. While its predecessors have grown extremely dated, the latest installment of the long-running franchise, Star Trek Into Darkness, attempts to return to some of these storytelling basics while maintaining the sleek veneer of contemporary sci-fi.

Into Darkness, J.J. Abrams’s latest and likely last run with the USS Enterprise, follows James Kirk (Chris Pine) and crew as they attempt to hunt down a genetically enhanced Starfleet turncoat played by Benedict Cumberbatch.

Cumberbatch, of BBC’s Sherlock fame, has been the object of intrigue in the film’s pre-release buildup and remains so in the film itself. Much has been made of his character’s possible identity and the revelation, while not disappointing, is fairly anticlimactic for fans (spoiler: He’s Khan).  There is also something to be said about the “whitewashing” of Khan (originally played by the late Ricardo Montalban), a somewhat disturbing trend in recent Hollywood films.

That being said, Cumberbatch does a fine job of at least mitigating such concerns with an extremely engaging performance throughout.  He brings a theatrical flair and ominous presence that was lacking in the first film’s villain.

Cumberbatch towers over the remainder of the cast, no small feat considering that this is still one of the better ensembles in recent memory. Most of the supporting cast is relegated to the background this time around, leaving room for Kirk and Spock (Zachary Quinto) to take center stage along with Cumberbatch.

Quinto continues his smooth performance as Spock, although Star Trek traditionalists will likely continue to criticize him for his alleged overuse of emotion and sarcasm. The sarcasm and wit, while very entertaining, do in fact get old after a while. Pine continues to play the brash, young Kirk of the first film, and the end of Into Darkness more than makes up for the apparent lack of character development between the movies.

And, that is really where the heart of this film lies, in the journey and struggles of the Enterprise’s captain. The plot is often muddled by the confusing motivations of the villains and somewhat strange pacing. The story works much better as a parable of sorts about a captain and the relationship and duty he has to his crew. While there is an implied threat to humanity and the galaxy at large, it is placed firmly in the distance, allowing the true conflict of the movie to be the lengths to which Kirk and Khan will go to protect their respective crews.

This is an element that Into Darkness shares with the best of the old Star Trek films—that is, Star Trek II: The Wrath of Khan. The films share many elements, most notably Khan as the primary villain. The final acts of each film actually run parallel to each other, although with some notable role reversals. Into Darkness’s approach actually makes for a more thematically fitting emotional climax than that of Wrath of Khan, although this great moment near the end is dampened by an unnecessary and over-the-top action sequence, along with a cringe-inducing reuse of one of William Shatner’s more infamous lines.

The visuals and action in Into Darkness, while impressive, are ultimately not as memorable as those of the first film. However, the craft placed into character and storytelling really shine through and engage the viewer on more than just an audiovisual level. And that is what has always given Star Trek longevity as a franchise: the focus on plot and characters in a genre too often content to distract audiences with empty visuals. Despite its flaws, Into Darkness delivers on that mission.

Star Trek Into Darkness, directed by J.J. Abrams, is currently playing at The Harper Theatre.