With latest single, Kanye gets face time on the quad 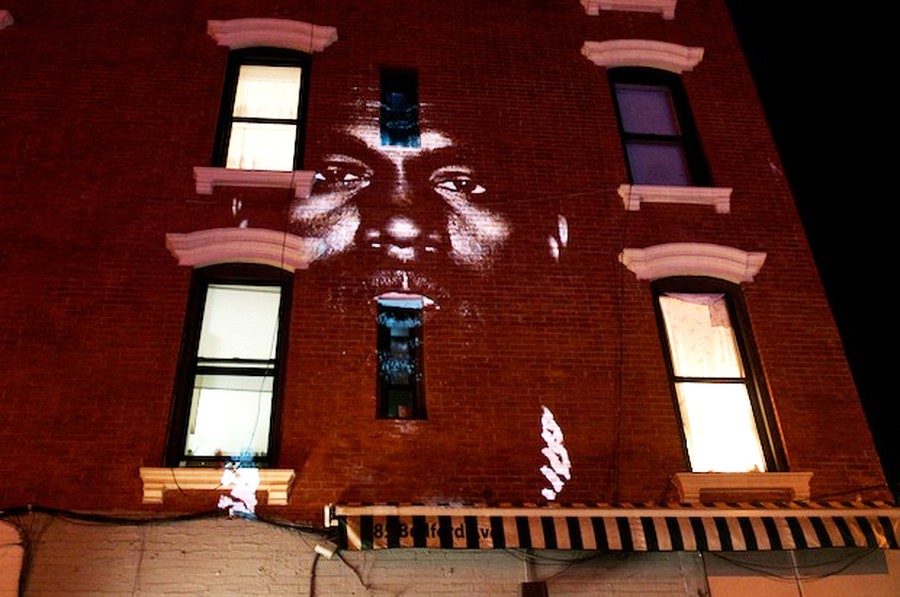 Kanye West debuted a new single late Friday night. Unlike most artists, he didn’t just upload it to YouTube and contact the major music news Web sites to build publicity. He took to Twitter for just the second time in the past four months, tweeting, “NEW SONG AND VISUAL FROM MY NEW ALBUM BEING PROJECTED TONIGHT ACROSS THE GLOBE ON 66 BUILDINGS, LOCATIONS @KANYEWEST.COM”. On his website, locations were listed on a map of the globe, coupled with mysterious 10- to 15-minute time intervals.

One of those locations was “University of Chicago (Music Dept) E 59th St. & S Ellis Ave.” The Web site said 12:15 a.m. to 12:30 a.m., but a crowd began to form on the sidewalk in front of Goodspeed long before that. By a quarter past midnight there were hundreds of people crowded on the corner, students and community members alike. Attendees were cheering excitedly; a nervous energy permeated the crowd as wild rumors spread about how the projection was going to happen, or if Kanye himself would show up. Shouts and pointing fingers accompanied every shadow moving in Goodspeed Hall or Haskell. The UCPD and the CPD were both on hand, and as time went on, more and more police officers arrived on the scene to help keep the crowd off of the street.

A few minutes after 12:30 a.m., a black Jeep and a large black truck bearing a projector and sound system arrived. A team wearing all black got out of the truck, set up the projector, and played “New Slaves.” Before Kanye started to rap, images of price tags flashed brightly on the wall. When he did begin, Kanye’s verses were delivered intensely and demanded attention. The video visually mirrored the present drama—it featured an extreme close-up of Kanye angrily rapping about a commercial brand of slavery that has been adapted to the rules of the 21st century. It ended with a falsetto voice bemoaning the reality that things just aren’t going to be the same. With all the cheers and energy that accompanied the song’s release, it felt much more like a live performance than a recorded video.

The next night, Kanye took to Saturday Night Live, despite ranting about the notion of humanizing himself on the show just a week prior. He stated, “Somebody asked me, ‘When you do SNL, is you going to do a skit about the paparazzi and shit? And humanize yourself?’ I ain’t here to apologize for no motherfuckers, man! It ain’t about me humanizing myself!” It was clear that Kanye wasn’t going to alter himself for the show anymore, as was the case when he infamously substituted an entire verse of “Power” to avoid complaining about SNL while on SNL.

He followed through on his promise, electing not to participate in any of the skits as he had in the past. Previous skits featuring Kanye had addressed recent media controversies, such as the incident with Taylor Swift at the VMAs. This time, he used his music alone to address recent issues. He started off the show by debuting “Black Skinhead,” which opened with a pack of dogs barking and a sample of Marilyn Manson’s “The Beautiful People.” Clad in his trademark black leather pants and a studded leather jacket, he delivered a song that was more screaming than it was rapping. The song featured Kanye at his darkest yet. He roamed back and forth on the stage, skirting shadows in front of the same price tags and slogans that accompanied the previous night’s projection of “New Slaves.”

“Black Skinhead” offers up lyrics that serve as a conceptual extension from where “New Slaves” left off. While “New Slaves” describes the attempts of the government and other institutions to enslave the population through advertisements, “Black Skinhead” is Kanye’s rebellion against these institutions. He yells, “I’m doin’ 500, I’m outta control now/But there’s nowhere to go, now/And there’s no way to slow down/Runnin’ out of time—moving fast/So just close your eyes and then enjoy the crash.” Kanye can’t be controlled, and isn’t in control, and is going to do what he wants, regardless of how much it might hurt him or anyone else. He ignores the rules he describes in “New Slaves” in favor of delivering his very own breed of “Fuck up your whole afternoon shit.” Just as the imagery behind him says, Kanye is “NOT FOR SALE.”

Kanye’s method of publicizing his new album breaks the conventions of typical album releases. From surprise appearances at the Roseland Ballroom and the Met Ball, to Frank Ocean’s mom tweeting that Ocean was the falsetto voice featured on “New Slaves,” to Kanye’s girlfriend, Kim Kardashian, announcing the name of his new album on Instagram on Saturday night, Kanye’s unpredictability is unprecedented. According to a tweet at the beginning of May, which simply read “June Eighteen,” Yeezus drops on June 18 via Def Jam. It reportedly features Daft Punk, Chief Keef, Pusha T, Skrillex, John Legend, Big Sean, Kid Cudi, 2 Chainz, Azealia Banks, and members of Odd Future, but any further concrete information about the album is extremely scarce. One thing is for sure, though—you’ll be hearing it.