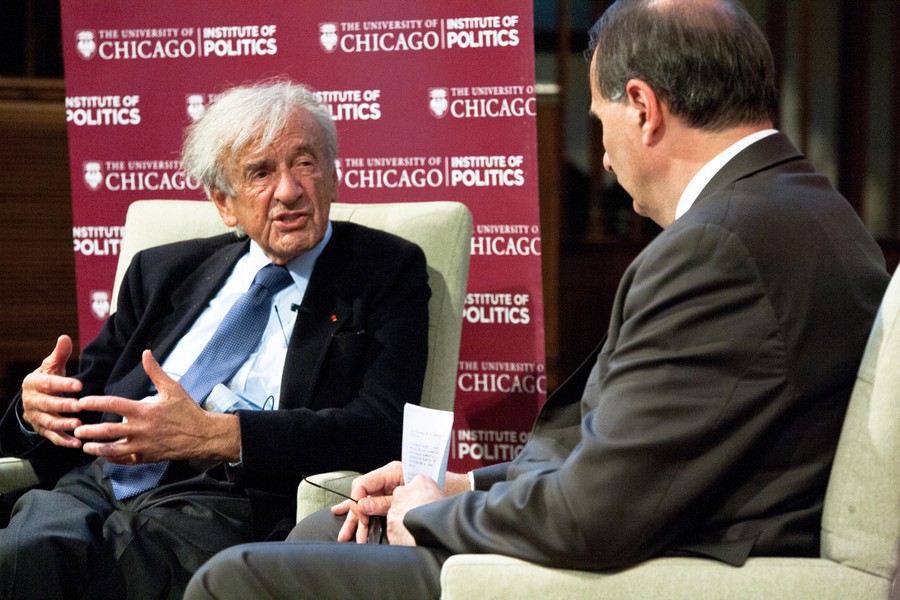 Holocaust survivor and Nobel Peace Prize winner Elie Wiesel reflected on the nearly seven decades since his traumatic childhood experience in the Auschwitz and Buchenwald concentration camps in a conversation with Institute of Politics (IOP) director David Axelrod (A.B. '76) on Wednesday evening. In the culminating event of the IOP’s inaugural year, Wiesel spoke at a packed Rockefeller Chapel—the largest indoor venue on campus—for what turned out to be the IOP’s most popular event yet.

The author of 57 books, Wiesel, 84, has spent his life speaking out against injustice and genocide all over the world. The Nobel Peace Prize committee called him “a messenger to mankind” for his work raising awareness of the Holocaust and other human rights violations.

Recalling Wiesel’s visit to Buchenwald with President Barack Obama and German Chancellor Angela Merkel in 2009, Axelrod said that he asked Wiesel how he could stand side by side with German authorities.

“The children of murderers are not murderers,” Wiesel responded at the time.

“Once you start [hating], you never stop,” he said on Wednesday. “Hatred becomes self-hatred, ultimately.”

In his questions, Axelrod inquired into what enabled Wiesel to endure the camps and retain optimism in humanity despite the atrocities perpetrated against him.

“I tried to look at the other side,” Wiesel said, “But I don’t know what sustained me.”

But Wiesel did not seem to share this view, as he began one response to a political question by positing, “I don’t like politics.” In general, he focused his remarks on the moral obligation to speak out against injustice.

Wiesel urged students considering a career in politics to seek out human connections in their work. “We need ethos, ethical character,” he said of engagement in government. “Follow the question, ‘What do you present to the other?’ and you can’t go wrong.”

While Wiesel may not seem like an obvious choice to speak at an IOP event, Darren Reisberg, executive director of the IOP said, “One goal of ours is to elevate public discourse over partisan rancor, and we do more productive, solution-oriented discussions. And somebody like Elie Wiesel, in terms of how he’s carried out his life and higher mission, really fits nicely into the way we’d like to see our students approach the world and follow that path in terms of how one deals with others, attacks injustice, and the like.”

Fourth-year Dory Fox observed tension between Axelrod’s political focus versus Wiesel’s insistence on speaking in terms of morality during the talk.

“Yes, [Wiesel] is very outspoken about the need for action in situations of injustice, but he does not lay out political plans for statesmen to follow.... This could have been an interesting discussion of the way that morals fit into politics, but it seems to me like a lot of the evening was spinning wheels.”

“One thought that echoed in the discussion was the idea of ‘not being silent,’ of always asking, ‘Am I doing enough?’”