After four years and 14 records, Brizzolara hangs up his spikes 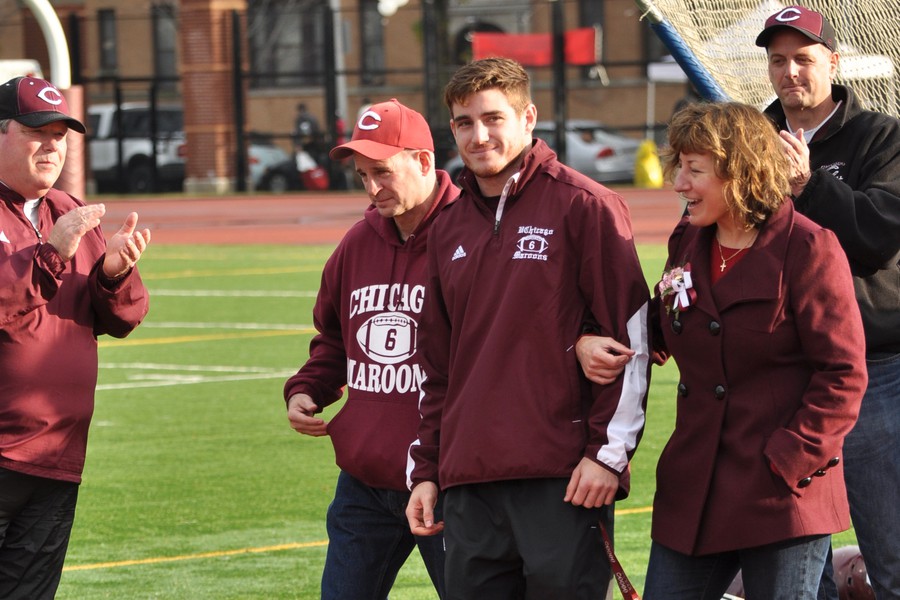 On June 15, the University of Chicago will graduate one of the most heralded athletes in its history.

Over the course of his career, Dee Brizzolara has set an unprecedented 14 school records between football and track.

“I think Dee’s major contribution to the program was his consistent ability to rise up in competition,” said head track and field coach Chris Hall. “He’s a great competitor. I don’t recall a meet in terms of a championship meet when he did not take himself to a different level.”

He’s certainly gifted as an athlete, but Brizzolara didn’t begin his track career with the determination he left it with.

“I wish I had taken track more seriously to begin with,” Brizzolara said. “As a freshman, I was very much caught up in social life. I would party every opportunity that I got, including after every meet. Luckily, I realized my mistake pretty early on. Now I see winning is more fun, and being good at what I spend so much time on is more important.”

The multi-sport star picked it up in a hurry, thanks in large part to the training of one woman.

“My track career became a lot different when Coach [Laurie] ‘Mac’ [McElroy] came. Junior and senior year [when she started], Coach Mac really understood what she was doing, and we set out goals. She did really well in helping me achieve them. She’s a phenomenal coach.”

All that training vaulted Brizzolara to his first appearance at the NCAA DIII Championships in outdoor track and field last week. Surprisingly, that was not his favorite memory of his track career.

“Obviously making it to nationals was the height of my track career. However, my favorite moment was at end of junior year when I was trying to make it to nationals and not making it, but it was then that I realized I could,” Brizzolara said.

He finished 11th at NCAAs in the 200-meter after entering the meet seeded 18th, rising up to the competition—just as Hall said—yet again.

In contrast to track, Brizzolara started his football career on top, winning UAA Rookie of the Year, All-UAA First Team, and leading the nation in D-III all-purpose yards per game (220.2) in his first season.

“Dee is a game changer,” said head football coach Dick Maloney. “Any time the ball is in his hands, [he can take] an 87-yard punt return or 65-yard reception the distance for six points.”

“There were very few teams we played in four years that I can remember that were able to contain Dee," said roommate and four-year teammate Jeff Sauer.

“My style of play changed after we lost [quarterback] Marshall [Oium (A.B. '11)], [wide receiver] Clay [Wolff (A.B. '11)], and [running back] Tommy [Parks (A.B. '12)],” Brizzolara said. “It put a lot more pressure on me with double teams regularly. That made it harder to produce like I did freshman and sophomore year, when all I had to do was run straight and catch the ball.”

In the second half of his career, he was thrown “a lot more shorter passes, because defenses could put one guy over top and one guy on me,” he said.

Unfortunately for the standout receiver, his fourth-year was hindered by a host of injuries: a fractured heel, torn labrum (shoulder), and concussion.

“I don’t like that I played my senior season injured,” he said. “It just sucked being injured. I wish I had let myself heal instead of playing injured.”

All in all, Brizzolara concluded his four years winning All-UAA First Team honors four times and UAA Offensive Player of the Year twice (second and third year). In addition, he set an extraordinary 13 school records, consisting of receiving, kick/punt returning, and scoring.

Off the field, Brizzolara’s manner does its best to keep up with his athletic ability.

“As fierce as his competitiveness is on the field, Dee is a very fun and laid-back character off the field,” Sauer said. “He’s been a roommate and best friend of mine for years now, and most of the memories I’ve made in college on and off the football field involve ‘Deefus’ in some way, shape, or form.”

Whether he’s scoring points on the gridiron or burning competitors on the track, Brizzolara has contributed more to Maroon athletics than anyone in recent memory, and his coaches, teammates, and fans will miss him dearly.