Hunger Strike | Lord of the Fried 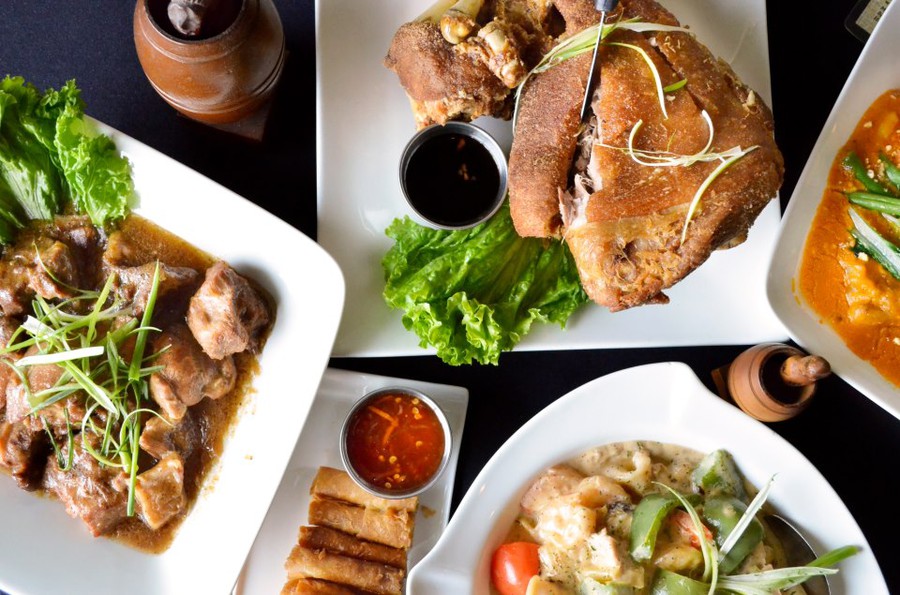 Marooned on a desert island, miles away from any vestige of civilization in every direction, desperation and despair slowly eating away at mind, body, and soul…where does one turn to for guidance and wisdom in these trying times? Anywhere but TV and movies, I hope. Unless you plan on drinking your own urine, developing separation anxiety over a volleyball, and/or constantly inquiring as to the whereabouts of the rum, pop culture proves to be a rather paltry source of survival knowledge. Then again, maybe you really enjoy drinking urine, in which case TLC might be interested in giving you a show. For the rest of society, however, while a box of matches, Swiss army knife, and first aid kit are the kind of bare essentials any sun-baked castaway may need, why don’t we ever take a moment to consider the things they actually want? Like, oooh, I don’t know, a deep-fat fryer. I mean, how else would you cook all that delicious polar bear meat? Fortunately Isla Pilipina, a tiny Filipino restaurant in an only slightly larger North Side strip mall, understands the vital importance of catering to man’s primal desire for the fryer. And it doesn’t matter whether you spent all day gathering firewood, building a raft, or just binge-watching Arrested Development; any excuse to indulge will suffice. Because indulge you will, provided that you make a reservation and emerge victorious in the game of musical parking spots taking place just outside the door. Due in no small part to some of the more recent media hype Isla has been receiving, and the contemporary propensity for “adventurous” (read: “cultured”) dining, the place packs in tighter than the scoops of white rice that come with most dishes. Given that the only other form of diversion in the immediate vicinity is a Southeast Asian video store, your best bet is to guarantee yourself a seat.

The art of frying, despite the protestations of state fairs across this fair nation, is truly an intricate dance of texture and flavor. Perhaps “duel” is a better choice of words. On the one hand, you desire the perfect snap, crackle and pop; vibrations reverberating from jaw to ear, a telegraph conveying good news from the western front (of the mouth). All the while, it has to taste just as fine and be cooked to the perfect level of doneness, a challenge when you have no idea what the hell is going on within the nether of the scalding oil bath. But Filipino cuisine takes on all fried challengers with gusto, and by extension, Isla Pilipina does as well. This kitchen is about as liberal with its use of the deep-fat fryer as William Golding is with allegories: Everything is fair game, especially pork.

If Ralph, Piggy, Jack, and the rest of those brutish British choir boys were stuck on this Isla, they would have absolutely no problem hunting down a pig. Various prepared and butchered cuts would be strewn about; perhaps half-submerged pork chops in the sand, or a tree’s low-hanging pig’s foot ripe for the picking. After a few days, they’d probably kill for anything remotely green or nominally resembling vegetation; even the boiled cabbage back at boarding school would suffice. Yet for most of us, Isla Pilipina proves to be a hog wonderland, the star of which is undoubtedly the Crispy Pata. The deep-fried “knuckle” lands on your plate with a deafening thud. Nay, crash-lands into the table, for that is the only surface large enough to contain this behemoth, this unidentified frying object. It’s a dish best summarized by the immortal words, “What is it?” Impaled as it is with a puny knife, it more resembles a deep fried rock than any known part of a pig.

However, extract plastic Excalibur, start carving away wherever and however, and only then does the truth slowly reveal itself. It’s a pork shank, the cut that ends just above the trotter, usually relegated for flavoring a stock rather than center-stage presentation. Served with a woefully small container of a soy sauce–based dip, there will inevitably come a point where you have to throw in the towel, or at least feel like you need one, and a cold shower to boot.

Other fried offerings are not quite as grandiose or prone to scaring away small children, though no less impressive in showcasing the kitchen’s unabashed love of the fryer. The Lumpia Shanghai is an incredibly popular appetizer, consisting of wee itty-bitty spring rolls that you practically inhale through both nostrils. They are chock full of different ingredients—pork, egg, jicama, green onions, carrots, love (when will restaurants learn that this is in no way appealing or appetizing?)—but given their diminutive size, and high fried-surface-to-interior ratio (science, bitches), the medley becomes a porky one-note tone. To employ a culturally insensitive cliché, it’s like eating a taquito dipped in sweet and sour sauce. Which, I may add, is pure genius, up there with “you got your peanut butter on my chocolate” and splashing maple syrup on your breakfast sausage.

Meanwhile, Lechon Kawali appears to be a sizable portion of a pig’s belly, deep-fried (of course) and served with insanely rich gravy. How exactly you go about disassembling the chunks of pork is a matter of trial and error, with some personal preference thrown in the mix. Do you first go for the juicy, lean meat, leaving the luscious layer of fat for later, like some cruel joke of a palate cleanser? Or maybe you eat all the crispy tops and bottoms first, i.e. the world’s most deliciously dangerous bag of cracklings? I say you throw caution and any sense of “logic” or “reason” out the window—along with your self-respect—and just dunk the whole ensemble into the gravy and then straight down the hatch. The choices are yours and yours alone! 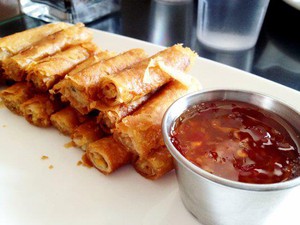 If, by some sad twist of fate and lack of foresight, a deep-fat fryer did not make it onto your desert island packing list, then you should be able to make do with some more scaled-down grub—as does Isla Pilipina, without any loss of quality. Yes, non-fried food: it does exist! Consider the Kare-Kare. Never in my life did I think I would or could call oxtail “refreshing.” This traditional Filipino plate just goes to show that there’s no need to waste your money on expensive cuts of beef, and that Europeans don’t have a monopoly on braising meat to spoon-tender oblivion. In this rendition, oxtail, in all its bony glory, convincingly plays the part of prime protein, smothered in a peanut-based sauce that complements rather than overwhelms. Throw in some thick green beans, mix with rice, and tell the beef bourguignonne to get back in its pot, thinking long and hard about how it can develop some more flavor.

And as if you needed more complexity in your life—or in your mouth—there’s the option of adding in some incredibly pungent shrimp paste, a mixture as funkadelic and trippy as Daft Punk sampling James Brown. On the flipside, the chicken adobo (though you could get it with pork, a four-letter word I won’t dare utter after this meal) is initially unremarkable, and its familiar flavors of black pepper and garlic recall a long-simmering stew more than anything else, let alone the south Pacific. But the dish, like a nondescript college sweatshirt, slowly grows on you: the simplicity becomes charming and enjoyable, a welcome relief from the fried onslaught.

I want to make this abundantly clear: Isla Pilipina is, by no means whatsoever, just an exoticized take on a fry shack. Trust me, Chicago’s already got more than enough super-heated oil in its chicken and fish stands to be energy independent well into the next century. Isla’s beauty and contribution is its versatility and ability to successfully navigate all cooking stations. You could just as easily build a meal here that appeals to a hard-core, meat-loving fry fan as you could to a diner who feels guilty about the eight spider legs in an average chocolate bar. Just pass through the kitchen (on the way to the bathroom) to see both of these culinary ideals at play: The chef is delicately layering a tower of tomatoes and eggplant, while submerging some indiscernible part of an animal into a bubbling vat of oil. Mix-and-match, and go for anything that catches your eye; there are many dishes, ingredients, and flavors here that you simply cannot find anywhere else. Some of them may be acquired tastes, but that should in no way deter you from at least giving them a chance. Surprise your palate, and surprise yourself. But please don’t drink your pee.

Isla Pilipina is located at 2501 W. Lawrence Ave. The average house special is $10.