Maroons hit hard by Cougars, hit back against Carthage 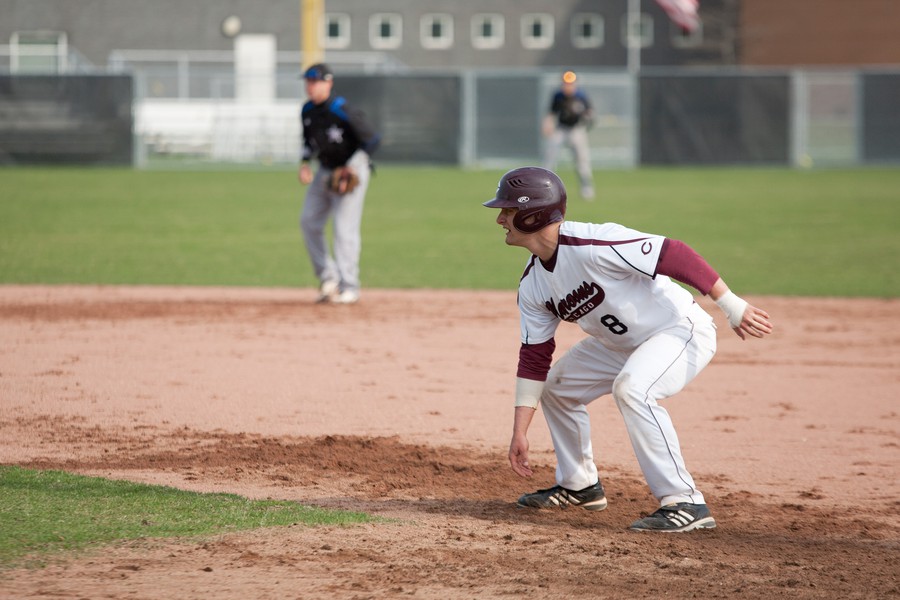 The Maroons bounced back from a loss at Concordia on Friday with a doubleheader sweep against Carthage on Sunday.

Against Concordia, the Maroons scored the first two runs of the game in the top of the second. Fourth-year first baseman J.R. Lopez led off the inning with a single, moving to third on a double by third-year outfielder Brett Huff. Both runners scored, while third-year DH Ricky Troncelliti and shortstop Dylan Massey grounded out consecutively.

Concordia quickly answered back in the bottom half of the inning, though, with two RBI singles, evening out the score at two.

The Cougars then scored six unanswered runs until what appeared to be a dormant Chicago offense briefly stirred in the sixth.

With one out, second-year Kyle Engel singled, Lopez followed with a walk, and Huff loaded the bases with a single. Troncelliti plated Engel by walking, and Massey drove in Chicago’s final run with a sacrifice fly to left field, plating Lopez to bring the score to 8–4.

Unfortunately for the South Siders, Concordia’s offense was far from finished and ended the game by scoring six more runs in the bottom of the eighth.

Third-year Alex Terry (1–4) would take the loss for Chicago, giving up eight runs (seven earned) on 10 hits in five innings with a walk and two strikeouts.

The tides would shift for the Maroons on Sunday as strong pitching by both Chicago starters gave the bullpen a restful weekend against Carthage. The team felt that the turnaround in play was due to a shift in execution.

“We knew we had to execute better than we did on Friday, and, if we did, we would do well today,” Troncelliti said.

Chicago scored their runs early. Fourth-year second baseman Steven Schwabe got the Maroons’ first hit of the day with a single to center. Fourth-year Jack Cinoman followed with a double down the right field line, which put two runners in scoring position with one out. Both runs came across when Kyle Engel squared up for a double in the next at bat.

The bottom of the second was the only blemish in an otherwise spectacular performance by Chicago fourth-year Matt O’Connor.

“[O’Connor] does a great job of keeping the ball down in the zone and keeping the hitters off balance with a variety of pitches,” Troncelliti said

Carthage first baseman Marc Mantucca led off the second inning by reaching on a throwing error by third-year shortstop Dylan Massey. Mantucca came across on a two-out RBI single by outfielder Sean Carroll.

Chicago padded the lead slightly in the top of the seventh and final frame. Lopez hit a double to lead off the inning. Huff quickly followed suit with a double of his own, plating Lopez and securing a 3–1 win for the Maroons.

Game two remained scoreless until the fifth, when fourth-year catcher Tony Logli led off with a single for Chicago. Fellow fourth-year Ben Bullock moved Logli over to second with a well-placed sacrifice bunt. With Logli in scoring position and two outs, Cinoman doubled, scoring Logli to put the South Siders up 1–0.

The Maroons put up three insurance runs in the following inning. With one out, the South Siders loaded the bases with three consecutive hitters reaching on a single, hit-by-pitch, and bunt single, respectively. Chicago then capitalized on some poor fielding by the Red Men. A dropped fly ball by outfielder Brian Huntsinger allowed Lopez to score from third. Logli then singled, scoring Huff. Bullock drove in the final run of the afternoon when he fouled out to right field. Troncelliti was able to score, and Bullock was credited with a sacrifice fly.

Chicago pitching was masterful all afternoon. Following a complete game by O’Connor, first-year Lucas Friss (3–0) pitched a shutout, giving up six hits, two strikeouts, and a walk. O’Connor would give up only one run (unearned) on five hits with seven strikeouts and two walks.

“We got great pitching from both Matt [O’Connor] and Lucas [Friss], along with some timely hits,” Troncelliti said, summing up the wins.

The South Siders are back in action tomorrow when they travel to Evanston, IL to face Northwestern at 3 p.m.