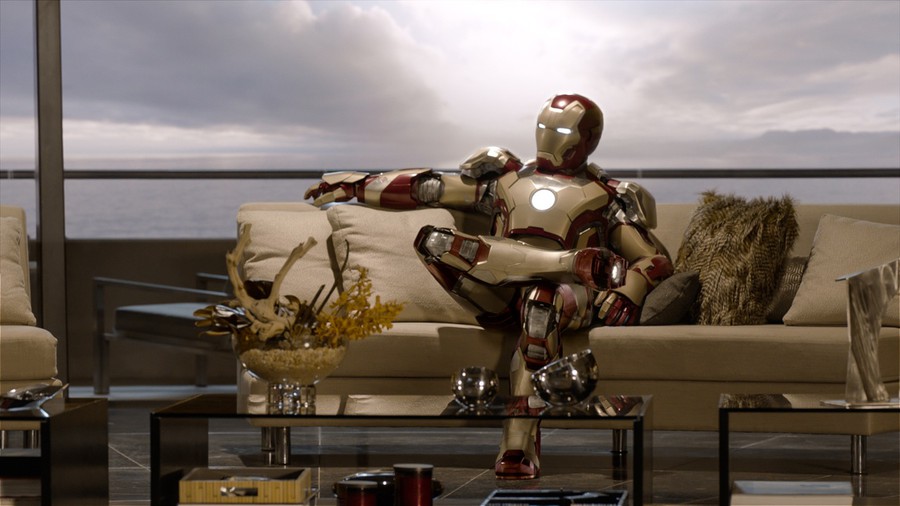 I haven’t done the research on this, but I think that Iron Man 3 is, in fact, the first “big summer movie” that we’re all supposed to see, regardless of quality or absolutely absurd ticket prices. And so it brings me great pleasure to report that, unlike Pirates of the Carribean 3, unlike Star Wars 3, and unlike Legally Blonde 3 (still disappointed about that one), Iron Man 3, while not quite high-art, is the rare trilogic conclusion that won’t leave you wishing you’d gone bowling instead.

We pick up our story with Tony “The Iron Man” Stark (a nickname garnered during his Varsity bocce ball days at MIT) struggling, along with the rest of the world, to regain his footing in the wake of the events of the Avengers. He battles his recurring bouts of anxiety by receding into his Malibu lair, endlessly tinkering with his metal suit and generally annoying the hell out of his incredibly patient girlfriend, Pepper Potts (Gwyneth Paltrow). But when a series of bombings occurs across the country, allegedly the work of the quasi-Eastern terrorist “The Mandarin” (a particularly entertaining Ben Kingsley), the Iron Man is forced to come out and kick some ass once again, or something like that.

But the Iron Man is not quite as “iron” as he used to be. With this film, new writer-director Shane Black focuses on the uniquely limited nature of Iron Man as a superhero. Everything “super” about Tony Stark’s hero is contained in his metal suit—it’s a crutch, and one that becomes more debilitating as he comes to lean on it. Now Tony is struggling to define himself outside the suit, even as his dependence on it becomes more and more obvious. There’s a scene, recalling Franco Nero with his coffin in Django, of a stranded Tony dragging his de-powered armor through the snowy woods of Tennessee, looking quite a bit like a tired hermit crab dragging its cumbersome shell.

The film is at its best in these moments, when Black and co-writer Drew Pierce get Tony out of the suit and force him to face the world without the help of tri-power repulsor cannons. As has been the case with Iron Mans 1 and 2, IM3 rides almost entirely on the strength of Robert Downey, Jr., whose charm as the billionaire-playboy simply refuses to wear off. Guy Pearce is only somewhat compelling as the auxiliary villain Aldrich Killian, but Ben Kingsley pulls more than his own weight with the minimal screen time he’s allotted.

There is, it must be said, a rather daring plot twist involving these dual villains, one that has not been entirely well received, especially by the comic book faithful. It’s a move that would seem jarringly goofy were it not encapsulated in the already unflinchingly goofy Iron Man franchise. In the post-Dark Knight world of comic book cinema, I continue to appreciate Jon Favreau’s (and now Shane Black’s) ardent refusal to make Iron Man “darker and edgier.” The Tony Stark of Iron Man 3, for all his supposed PTSD, is as much a snarky goof-ball as he’s ever been, if not more so. Only Sam Raimi’s Spider-Man has been so steadfast in its commitment to not taking itself seriously. But whereas the absolute hokiness of Tobey Maguire as Peter Parker was sometimes difficult to stomach, Downey, Jr.’s Stark is perpetually in on the joke. When, before delivering the final blow to a pyrokinetic redhead, he issues the impeccably cheesy line, “I’ve dated hotter chicks than you,” he does so with a grimace and an apology.

Of course there are the requisite plotholes in need of filling, some of which are glaringly obvious even for comicbook fare, and if you’ve soured on superheroes and explosions by now, or are generally the type of person that hates fun, you will have a hard time enjoying Iron Man. There is also—and this was a big risk—a prepubescent sidekick involved. I left the theater 13 bucks lighter and in pretty good spirits, even as I was puzzling over questions of where the Hulk was during all of this, and what they were thinking when they decided not to include “Black Sabbath” in the soundtrack of a movie called Iron Man.