Farmers market on 61st an oasis in a food desert 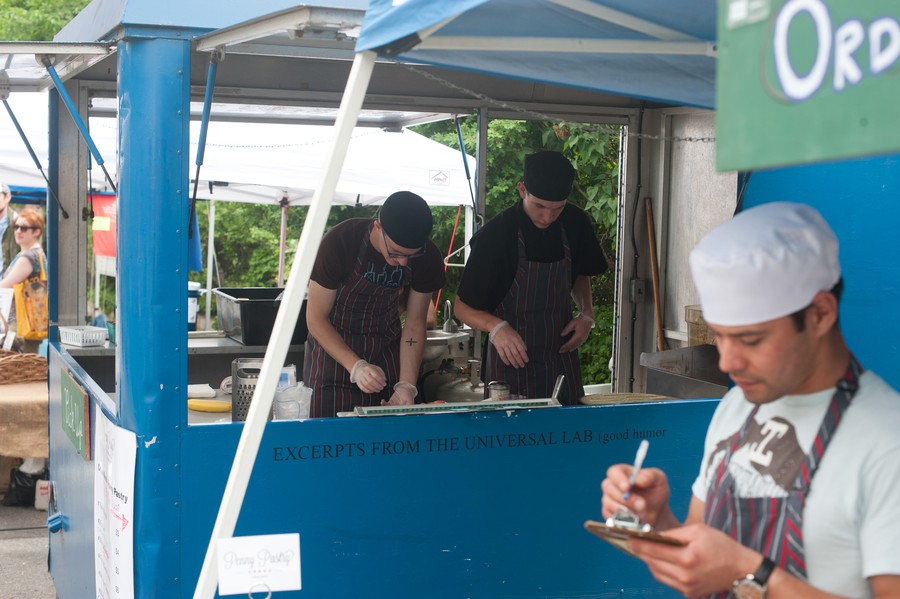 In an area otherwise served by fast food restaurants and convenience stores, the Farmers Market at 61st Street and Dorchester Avenue seeks to create easy access to fresh, regionally sourced food and produce.

Experimental Station, a nonprofit which also runs Blackstone Bicycle Works and other community programs, started the Market in 2008 in response to a study which listed Woodlawn as one of 23 Chicago food deserts, defined as districts with extremely limited access to healthy food. According to the study, 50 years of economic divestment in Woodlawn and a lack of proper leadership and planning turned the once bustling commercial district into one that no longer attracts supermarket chains or small businesses, contributing to an extremely high rate of diabetes and other health problems for Woodlawn residents.

Market manager Danny Burke explained how the Market, which only sells food from farms in Illinois, Indiana, Michigan, and Wisconsin, addresses an array of problems afflicting both the South Side and much of the world.

“I was always turned off that [the environmental movement] was a largely white and upper middle class movement, and so I got interested in the social justice aspect of environmentalism and looking at access disparities,” he said. “When I was doing community assessments, one of the guys tending his tomatoes told me, ‘It’s real bullshit when, in most communities in America, it is easier to get a gun than it is to get a tomato.’”

According to Burke, this mentality accurately reflects problems of food access and hunger in America.

“If all you can walk to is your corner store and it has cheap candy, pop, and Twinkies, there is not a choice there to eat healthy, even if you wanted to. You don’t have a car, and maybe the only way to get to a supermarket outside of the community is to take three bus routes,” he said.

While Experimental Station promotes the Market on campus at Wellapalooza and other health-related events, fourth-year Adriana Urdaneta, a student intern at the Market, feels that a lack of awareness among students remains.

“The number one factor I get for why people haven’t gone is that they didn’t know it existed, and I’ve tried to address that a little in outreach,” she said.

But, she added, the Market’s obscurity to students may not be so terrible.

“I definitely think that it could have a bigger presence on campus, but it’s important to keep in mind that the Market is there to serve the residents of Woodlawn, not just the University of Chicago,” Urdaneta said.

Echoing her sentiment, Burke said, “[University members] are great neighbors in terms of really involved faculty and students coming to the Market, but we want to try really hard not to make it be a University of Chicago Farmer’s Market.”

Though students have requested that the Market be run in the quad area, Burke emphasized that the current location is key to the Market’s identity.

“Just seeing two people from different walks of life buy the same spinach and talk about how good it tastes—that’s my favorite part of it. It’s really a community event,” he said. “When you are surrounded by a lot of violence in the South Side, to see that and to see the huge positive aspect of the South Side in the midst of all the negativity you see on the news is what’s so great.”

The Farmers Market is open every Saturday from mid-May through mid-December.