Music festival forks from the mainstream 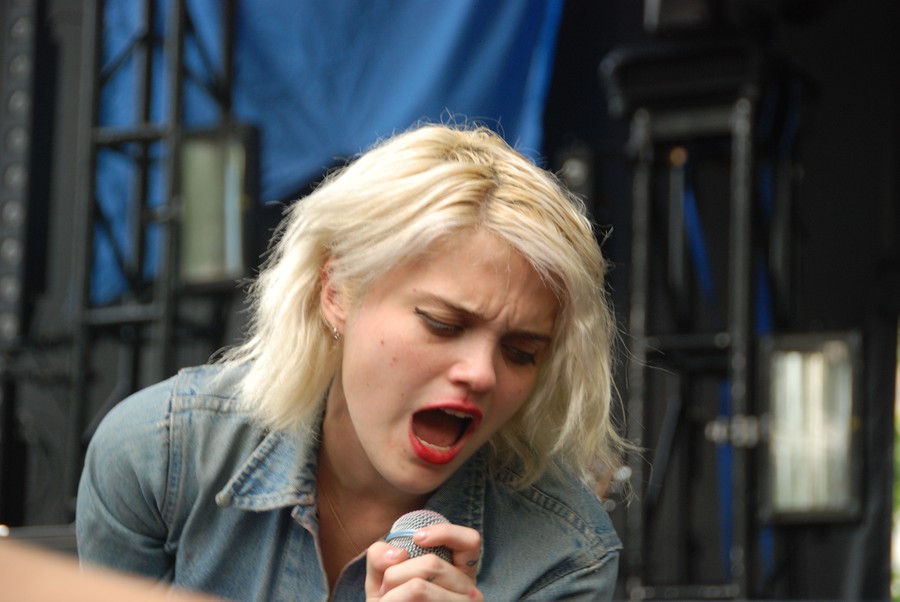 This summer’s Pitchfork Music Festival commenced with scorching temperatures on July 19. Marketing itself as “the best and most unique festival in the world,” Pitchfork is an annual hipster-indie-alternative musical paradise, this year hosting 46 musical acts on three different stages in Union Park. The festival is organized by Pitchfork Media, an Internet publication known for being one of the first to publicize bands such as Bon Iver and Arcade Fire. 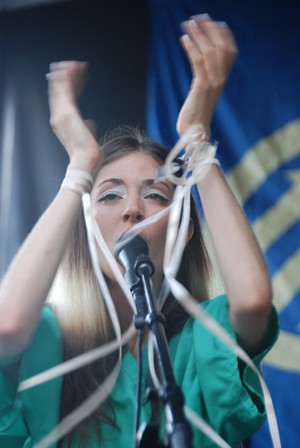 Over at the Green Stage, Mac DeMarco, a droll Canadian rocker, had the crowd grooving with wacky covers and jangly rock ’n’ roll. DeMarco had the crowd chanting his lyrics as he precariously balanced his girlfriend on his shoulders in the final number. Perhaps we could have gone without the zany impressions, but his performance was equally entertaining and engaging. 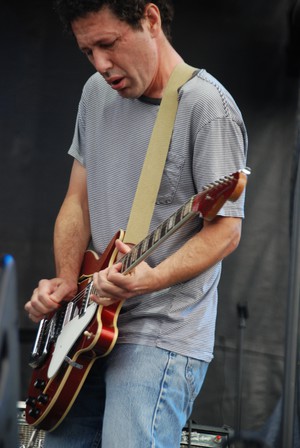 Temple Shipley
Joanna Newsom had no trouble silencing the crowd during her set, as she crooned with her signature babyish singing style. She performed expertly, playing the harp or piano while singing songs that seemed to (enjoyably) flow on forever. She was able to play new material in additional to her older songs, stunning the crowd with both.

The day closed with headliner Björk, dressed to the nines in a golden dress and a dandelion-like headdress. Backed by a girls’ choir, she effortlessly powered through old hits (“Hunter,” “Hidden Place”) and newer songs from Biophilia. Synths were provided care of a handy zeusaphone (a singing Tesla coil) that hung above the stage. Even though the set was cut short due to an impending storm, her powerful performance and unconventional special effects made for a great Friday headliner. 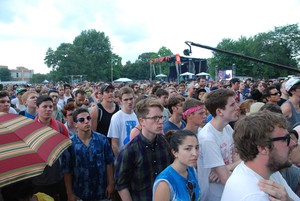 Temple Shipley
As if Saturday’s theme were hardcore rock, Pitchfork decided to schedule nearly every garage, punk, and heavy metal act for Saturday afternoon. The bands Metz, KEN Mode, White Lung, Pissed Jeans, and Savages played one right after the other—it was nearly impossible to pass the afternoon without hearing at least one headbanging act.

Metz, a Canadian punk band, energetically powered through their set at the Blue Stage. The band certainly has a penchant for over-the-top vocals and high amp volumes, but it wasn’t unwelcome by the crowd. Between the ethereal bravado of Joanna Newsom and the unfunny ironic cult that is TheBasedGod (Lil B), Metz’s screaming and hardcore guitar riffs were something very novel to the festival. 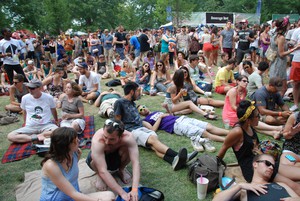 The Pitchfork Music Festival was an eclectic mix this year with lots of crowds despite the heat.

Temple Shipley
Oddly, joining the hardcore entertainers of the afternoon was Julia Holter, a reserved singer-songwriter who, along with her multi-instrumental band, brought some peace to the festival. Performing at the smaller Blue Stage suited her down-to-earth style, and the audience was able to hear some new material from her album due out this month.

Alternative R&B artist (and Beyoncé’s sister) Solange performed a funky set for a surprisingly large crowd at the Green Stage. She encouraged the audience to get down and dirty—at one point she requested that the crowd grind as if it were a “high school dance.” While writhing on the stage, she belted out some of her most popular songs “Some Things Never Seem to Fucking Work” and “Losing You.” 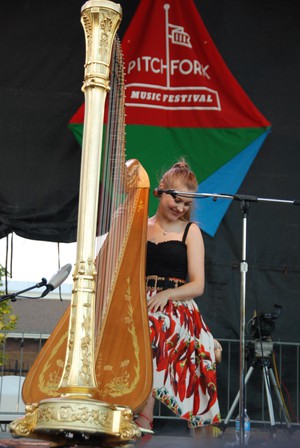 Joanna Newsom performs on the harp.

Temple Shipley
Sunday, seemingly the most popular day of the festival, hosted some of Pitchfork’s most renowned acts this year—M.I.A., R. Kelly, TNGHT, and Lil B. M.I.A.’s performance was a chaotic, bass-pounding, confusing clash of EDM at its best and the shoddy sound equipment at her disposal. Although Pitchfork’s soundboard managers ostensibly could not handle the roaring medley of bass, sitars, and snares that M.I.A. brought to the speakers, her (involuntary) a cappella rendition of “Bad Girls” didn’t go unappreciated. “This is our sound!” she shouted to the crowd after the end of the song, concluding her set. The audience was elated with her perseverance through the poorly managed show.

Competing with R. Kelly as one of the two finales of the night, TNGHT ended the festival with their distinctive minimalist trap music. As an electronic duo with only five songs released from their eponymous 2012 EP, they managed to bring a large, sweaty crowd over to the Blue Stage. Lunice, who performed at this year’s Summer Breeze, and Hudson Mohawke worked the crowd effortlessly, mixing their older, released material with rappers like Kanye West and Big Sean. It was certainly worth skipping out on R&B singer R. Kelly’s performance—those who saw TNGHT were even able to witness the crowd-surfing of an industrial garbage can.

This year was not Pitchfork Music Festival’s most jaw-dropping lineup, but the festival certainly lived up to its reputation as “unique.”