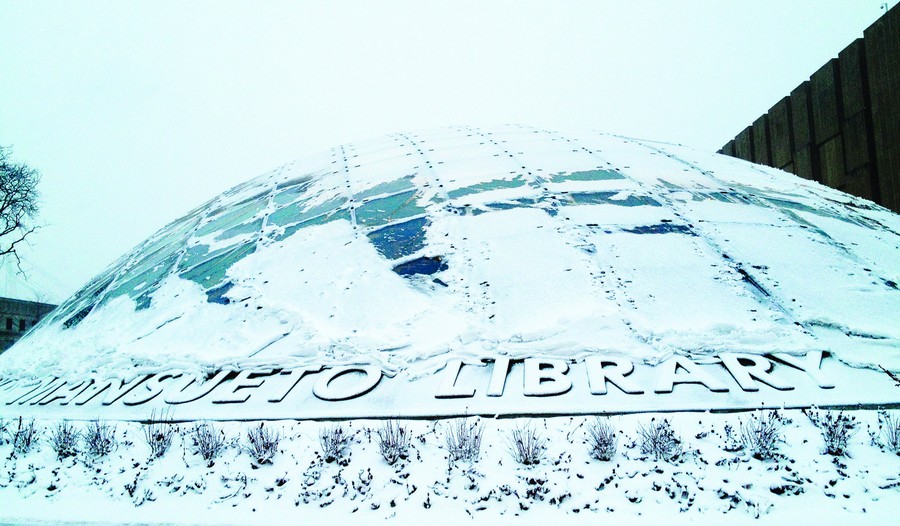 If you stopped a random UChicagoan on the main quad and asked them to direct you to the campus social hub, chances are pretty good that they’d point in the direction of the Regenstein Library. Sad, maybe, but true: From the first floor of the Reg to the eerie tomb-silence of Crerar’s echoing hallways, social and scholastic life intertwine at the libraries of the University of Chicago. On the journey from your first Core classes to your final attainment of that hard-earned degree, you may fall in love with the classes, the professors, the Neo-Gothic quads, and yes, maybe even the people, but no matter what path your education takes, you can be sure you’ll be spending a lot of time at the library. Each of the seven different libraries boasts its own personality, keeping studying—and procrastination—fresh at each locale.

Despite its fortress-like exterior, the brutalist-by-design Joseph Regenstein Library attracts the most students of any campus library. This may be due to its central location, or by sheer virtue of its size; completed in 1970 with concrete slabs and more concrete slabs (and, to save it from being too depressing, huge windows and limestone as well), it is the largest library on campus, with five floors and two basement levels. The Reg houses over three million books in its stacks and is home to five rooms devoted to specialized studies, from the East Asian archives to music and the fine arts. The Special Collections Research Center in the Reg houses rare books, archives, and manuscripts, and hosts exhibits such as children’s books and graphic art from the Soviet Union, or souvenirs from the Chicago World Exposition. Good old Reggie has a lot of room for private study, whether in the book stacks or in the carrels. And for collaboration (read: hanging out), there’s the A-Level in the basement, and the study space on the first floor, which stays open 24 hours on weekdays (and is just a hop and a skip away from Bart Mart, open until 3 a.m.).

Built just two years ago and connected to the Regenstein via a sleek white tunnel is the glass-walled Mansueto Library, whose shape gave birth to the nickname “the Egg.” Sitting beneath the glass dome when the sun is out means all the rays come pouring in—prompting another nickname, Mansweat. Mansueto is high-tech, equipped with the “Automated Storage and Retrieval System,” which takes up only a seventh of the space ordinary book stacks would. Its lighting has won awards, and no wonder—every inch of the ceiling and walls in this futuristic dome is open to the light. It’s quiet but companionable, with students sitting next to one another on long wooden tables with individual lamps built into each space.

For those with a more romantic bent, there’s the Arley D. Cathey Learning Center. Its name certainly doesn’t match up to its appearance and it doesn’t actually have any books, but it’s one of our most iconic study spaces. Still housed in the century-old Gothic building that bears its former name, Harper Memorial Library, the third-floor space was ripped asunder from its stately name—literally, when the ornate name plaque was taken from the wall and replaced with an incongruously modern “Arley D. Cathey” last year. While still recovering from the throes of this identity crisis, the library consistently features on lists of America’s most beautiful college libraries. With stained glass windows and delicately shaded lamps covering the tables of the long study hall, Arley D. Cathey is all about stateliness. If you sneeze, the echo might wake the dead, but there are comfortably squishy orange armchairs for naps in between classes or while pulling all-nighters—like the Reg, this library is open 24 hours.

While the aforementioned are the most popular library study spaces on campus, the other five should by no means be overlooked. For a change of pace, another beautiful space south of the Midway is the D’Angelo Law Library. It’s part of the Law School, so undergraduates have to sign in at the front desk, but the space is worth it. D’Angelo is sumptuous in its varnished wood, carpeting, and the ergonomic soft red chairs littered around the building, but it takes its luxury seriously: The ambience is quiet and no-nonsense, and the luxurious furnishings are the reward for all the hard work you can accomplish there.

Across the street from Burton-Judson, you’ll find the Social Services Administration Library. Another graduate school library, SSA is spacious, well lit, and unpretentious, and might provide a welcome respite from running into a steady stream of your friends. Sometimes, though, classy parties can be seen through the windows after hours, so maybe there’s more to the building than meets the eye.

From the outside, the John Crerar Library, dedicated to science, medicine, and technology, looks inviting: There are elevators and polished staircases, with tall windows on the ground level that look out to the neatly kept green lawns of the West Quadrangle. But step inside and experience the morgue-like silence that dominates Crerar. Though not a popular a space for students who like to study more casually or talk while doing problem sets, it’s undeniably a place to focus, with a mood so stern you might feel like someone’s breathing down your neck as you turn the pages.

Lastly, there’s Eckhart Library, which, as it’s on the second floor of the Eckhart Hall of Math and Statistics, has plenty of—you guessed it—math and statistics. Though it’s currently closed for renovations, expect to find study hall–esque wood furniture à la Dead Poets Society, where schoolboys scribble with quills and blotters. Even if you’re not studying math and science, the intimacy of Eckhart Library makes it an ideal place to escape the sometimes-intimidating scale of the other UChicago buildings.

Regardless of whether you study in your room, in cafes, or in libraries, there’s no doubt that at many points in your UChicago career, and perhaps more than you’d like, you will find yourself holed up in one of these seven venerable spaces. As in any enduring relationship, there will be anger, arguments, break-ups, and apologies—but there will be the good moments, too, like writing the final sentence of your paper two minutes before (or 15 minutes past) the due date, or watching the sun come up over a cup of coffee gone cold.